"It’s a connection with a complete stranger that you’ve never met and never talked to and that brings a little joy."
Mar 27, 2020 10:43 AM By: Daniel Wagner 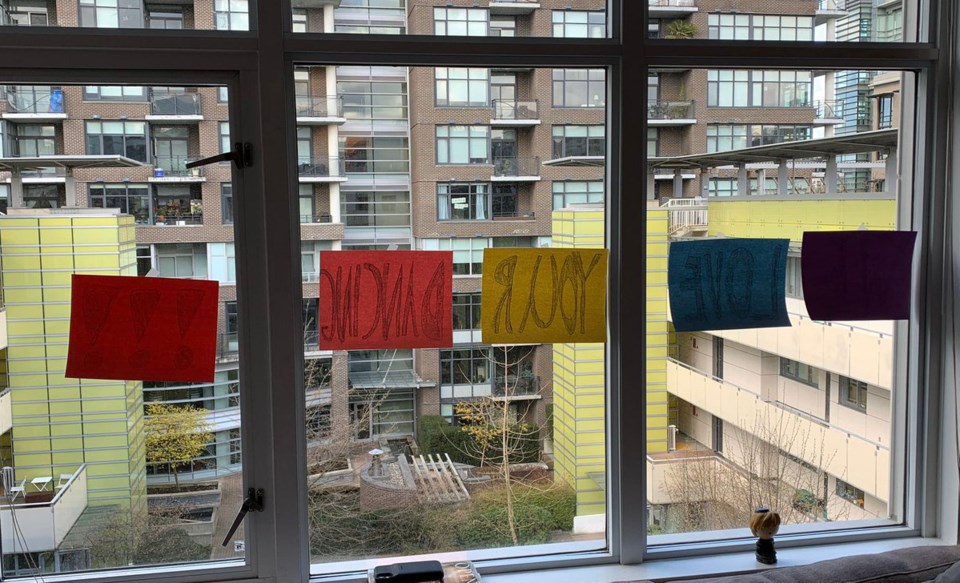 It can be tough to find a sense of community when you’re cooped up in your house all day.

Like a lot of people in Vancouver, Derek Jory is working from home during the COVID-19 pandemic. He’s a writer for the Vancouver Canucks’ website and social media, which is an issue with the hockey season on hold.

He’s also a parent, with two young kids, nine and one-and-a-half. Finding ways to keep kids occupied and entertained is a challenge right now with school shut down indefinitely and everything from playgrounds to swimming pools closed.

“We try and get out at least once a day for a walk around the Seawall,” said Jory. “They’re used to running everywhere — at recess, before school, at gym, and then an activity after school — so just finding a little green space where nobody’s there and throw the frisbee, run, and try to get some energy out of them.”

Then one day they noticed one of their neighbours in the apartment building across from theirs was getting her energy out in a particularly fun way.

Next building over neighbour dances every afternoon. It’s part of our quarantine routine and we love it, so we left her a message... pic.twitter.com/TzcT390jdK

“A few days into self-isolation, we looked across at the building straight past the courtyard from us,” he said. “There’s probably 200 windows and she was on the same floor as us, and every day we saw this person dancing around in front of her window and it was a different style of dance every day. And we would start dancing too.”

His kids loved it and it became part of their daily routine — dancing with a complete stranger.

“It occurred to me that maybe she is alone over there,” said Jory. “We would never see anyone dancing with her and this can be a tough time if you have family and friends with you, let alone by yourself, I can’t imagine what that’s like. I was talking with my son about this and he said, ‘Let’s make a sign.’”

So they did, writing “We love your dancing” across several pieces of colourful paper and taping them up in their window.

WE LOVE YOUR DANCING!!! pic.twitter.com/n7dT5mfNao

Their new friend across the street saw their message and happily replied with a message of her own.

Although separated, we’re all in this together. 🤗 pic.twitter.com/ecDAFvKpcH

“The next day we saw her start taping up her own sign and we were losing our minds that she was replying,” said Jory.

To keep the conversation going, Jory and his kids asked her what her favourite song is and she, very appropriately, replied with Robyn’s 2010 hit, “Dancing on My Own.”

Update: We asked our dancing friend what her favourite song is. She replied Dancing On My Own by Robyn - clever girl! 💃🤣 pic.twitter.com/McO0W8ev5k

Jory’s son immediately insisted they play the song and they all started dancing together. “After a few minutes, the song ended, then she took a bow and we waved,” said Jory.

“Later on, we noticed that there’s a window on the first level of that building that now has a sign on their window that says, 'Float On' by Modest Mouse,” he added, “So now they replied too! I think we’re going to ask ‘What’s your favourite movie?’ tomorrow.”

At a time when so many people are disconnected from their community by the quarantine, finding these types of unexpected connections can be incredibly meaningful.

“It’s a connection with a complete stranger that you’ve never met and never talked to and that brings a little joy,” said Jory. “Just like the seven o’clock salute [to healthcare workers], I was almost brought to tears. You go out there and it’s so loud and overwhelming. It’s the highlight of my day.”

Finding those heartwarming moments in the midst of tough circumstances is key, whether it’s banging pots and pans to cheer on healthcare workers or an impromptu dance party with a stranger. Keep looking for those moments in the weeks ahead.

This drive-in 'social distancing' movie theatre is coming to Vancouver
Mar 26, 2020 1:06 PM
Comments
We welcome your feedback and encourage you to share your thoughts. We ask that you be respectful of others and their points of view, refrain from personal attacks and stay on topic. To learn about our commenting policies and how we moderate, please read our Community Guidelines.