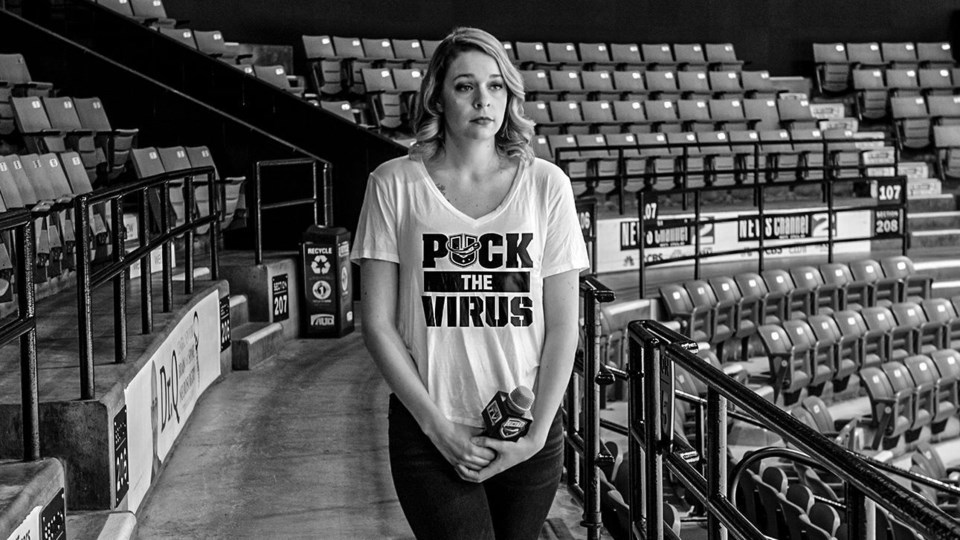 We need a new word for “viral” during the pandemic, as something “going viral” seems like a bad thing right now. Perhaps we can call it “going exponential” or name it for something else that gets spread from person-to-person, such as Pogs.

Like Pogs, the unique efforts of the Utica Comets to compensate all of their employees during the suspended season have become very popular in a short period of time: they’re selling “Puck the Virus” t-shirts, with proceeds going into a fund to provide financial support for staff.

Just like the NHL, the AHL has paused the season to prevent the spread of COVID-19. Unlike the NHL, AHL teams often have fewer resources in place to deal with a pause of this magnitude. They depend almost entirely on the revenue generated by ticket sales and corporate sponsorships.

The Canucks’ AHL farm team, however, has managed to go this far into the suspended season without any layoffs or staffing cuts. That stands in stark contrast to some NHL teams, such as the Boston Bruins, who laid off hundreds of part-time ushers, put some full-time staff on temporary leave, and reduced the salaries of those that stayed on.

The Bruins, owned by multi-billionaire Jeremy Jacobs, were the last team to announce a plan to compensate game-day employees out of work due to the suspended season, and with one significant caveat: the employees will only be paid “if the six remaining regular season Bruins games aren’t played.” That means they won’t be paid if the NHL season resumes and won’t receive any help immediately, as no decision has been made about the resumption of the season.

The Bruins aren't the only team that has announced layoffs. The Montreal Canadiens, owned by billionaire Geoff Molson, laid off 60% of their employees. The Buffalo Sabres, owned by the multi-billionaire Pegula Family, one of the richest owners in the NHL, laid off almost all of their food services and hospitality employees.

As the smallest market in the AHL, we don't have the luxury of a billionaire owner. It's all locally owned and operated. This hits home for ALL employees of the Utica Comets and our building.

That’s why we’re selling the shirts.

While the Comets are certainly a smaller organization with fewer employees to pay, the contrast is still astounding. Their fundraising efforts, including the “Puck the Virus” t-shirt, have meant no layoffs at all.

"Clearly, it's not for profiting or for front-office jobs. It's only simply to keep as many people employed as possible," said Comets president Robert Esche to ESPN. "Every small business is going through this right now. We're the smallest [media] market in the AHL. All we're trying to do is stay afloat. The coolest thing about it is that during such a bleak time, it's reenergized our staff to something I've never seen the likes of, which is very impressive in the face of all of this."

The shirts, which incorporate the Comets’ third logo, a stylized “U”, have been a hit with hockey fans beyond Utica. Perhaps it’s because the Comets’ logo doesn’t immediately scream a specific team identity, it can be embraced by fans of any team.

The phrase itself was the brainchild of the Comets’ play-by-play announcer, and lover of puns, Joe Roberts.

“In the middle of a conversation, I jumped in and said, 'What about Puck The Virus?'” said Roberts to ESPN. “It's kind of cool. It sounds like a swear word, so people will think it's hilarious. And it's also not overwhelmingly our brand, which would turn off people from buying it.”

The efforts of the Comets to support their staff and community put to shame some big-league teams. To support those efforts, go to puckthevirus.com to buy a shirt.