This funny cartoon depicts how the rest of Canada views B.C. winters 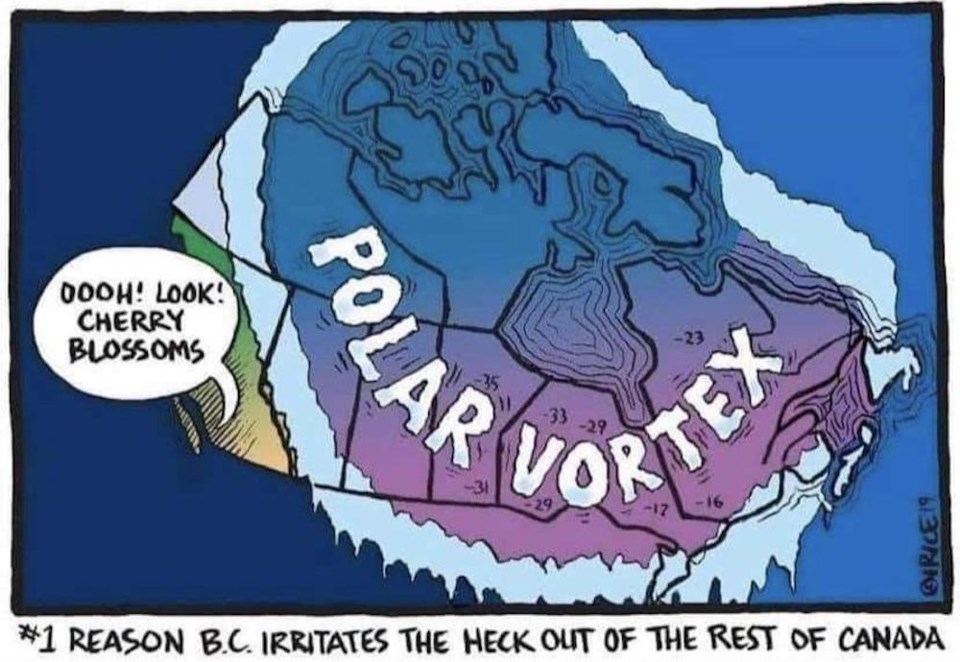 Compared to the rest of Canada, the Lower Mainland sees markedly warmer temperatures, as well as significantly less snow during the winter season. Photo via iricecartoonist / Reddit

While there's still a chance Vancouver could see some frosty spells this winter, the city has seen some fairly mild temperatures so far.

Compared to the rest of Canada, the Lower Mainland sees markedly warmer temperatures, as well as significantly less snow during the winter season. However, that never stops locals from complaining about the "wet-cold."

Although parts of the province are substantially colder, the City of Vancouver has enjoyed a fairly mild winter.

Canadian editorial cartoonist Ingrid Rice shared an image on Instagram that depicts how the rest of Canadians feel about B.C. during the frosty season. While she created the image a few years back, it has surfaced again on Reddit.

At the time of this writing, the image has been up-voted a whopping 1,600 times in a mere 24 hours.

In the cartoon, the rest of Canada is covered in a blistery polar vortex, while B.C. looks green and sunny and the caption over the province reads "Oooh! Look! Cherry blossoms."

Underneath the cartoon, the caption reads: "#1 reason B.C. irritates the heck out of the rest of Canada."

Does it really get that cold in Vancouver in the winter?

The answer depends on whom you ask. For some, the seemingly unending stretches of chilly, damp weather feel rather frigid. Others, however, find the idea that Vancouver is cold laughable.

The first image shows a man in Vancouver donning light winter attire saying, "Yyyeaaahh...but it's a wet cold" with a light rain behind him and some green trees. In the following image, a person who is "everywhere else" is standing in feet of snow and completely bundled up with a bright red nose. The person also appears extremely cold and agitated.