This lady takes her duck on strolls through downtown Vancouver (VIDEO) 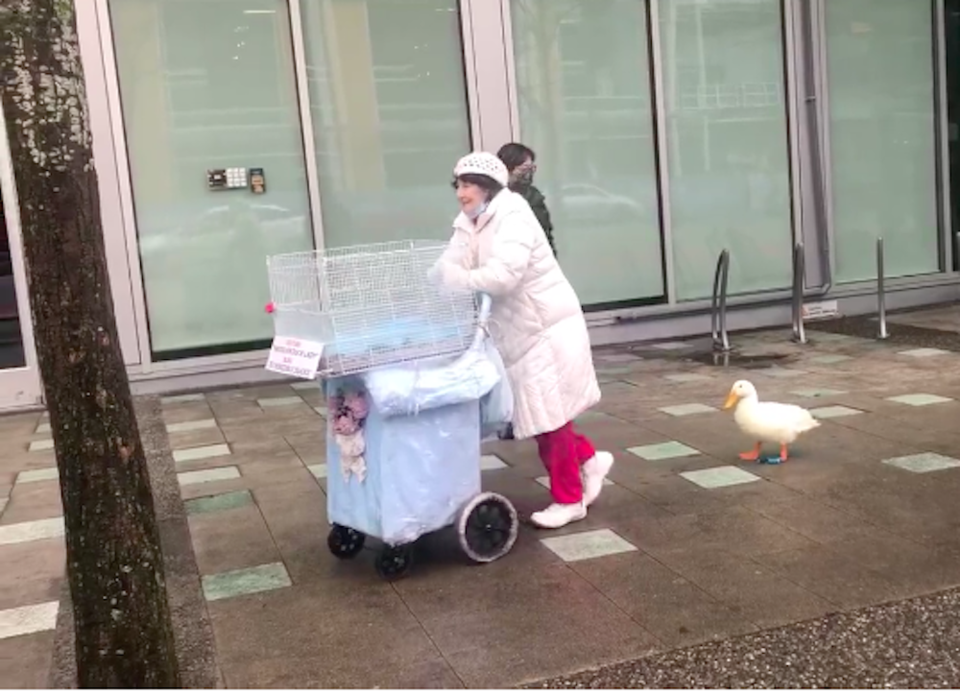 Someone has shared an adorable video of a snowy white duck following a lady down the sidewalk near the intersection of Cambie Street and Broadway. Photo via dexxan69 / Reddit

There seems to be no shortage of strange, yet wonderful creatures waddling around Vancouver lately.

Last week, Vancouver Is Awesome shared a video of a small brown beaver making its way across the wet pavement somewhere in the city.

Now, someone has shared an adorable video of a snowy white duck following a lady down the sidewalk near the intersection of Cambie Street and Broadway.

Reddit user dexxan69 shared the heartwarming footage on the platform Sunday (Jan. 10),  along with the caption: "Lady and her pet duck. Video taken today at Cambie and Broadway."

In the video, a duck with what appears to be a blue bandage on its foot waddles behind a woman as she pushes a cart with a cage on top of it.

Lady and her pet duck. Video taken today at Cambie and Broadway. from r/vancouver

In the comments below, one person mentions that the woman is famous for her feathered friends, and notes that she has had several over the years. In fact, the self-proclaimed "duck lady" has her own blog, which features "incredible ducks" dating back to 1980.

The blog begins with Harvey the Duck, who the woman, Laura-kay Prophet, says she had from 1980 to 1986. After that, she had two ducks called Webster and Holly. The next duck, Bobbie, was purportedly the "fortune-telling duck."

Bobbie was also referred to as "The soup duck," and the following duck was known as Bobbie II and was considered the "reincarnation" of the first bird.

Watch a video of her story.