Touch-screen kiosks that include live transit schedules are being unveiled today by TransLink. Over 50 of these kiosks are set to be installed.
May 22, 2019 9:25 AM By: Chris Campbell 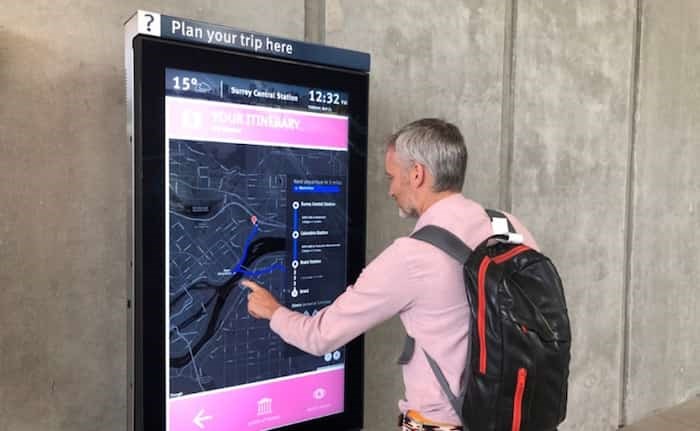 This is what the new transit kiosks will look like. Photo: TransLink

Touch-screen kiosks that include live transit schedules are being unveiled today by TransLink.

More than 50 of these kiosks are set to be installed at SkyTrain stations on the Expo and Millennium lines, West Cost Express stations, SeaBus terminals, Park and Ride locations, and bus loops.

Commuters can use the kiosks to:

TransLink says the cost of purchasing, installing and maintaining the kiosks is being funding by its advertising licensee Lamar, in exchange for displaying advertising when the screen is not being used by customers.

“We see this as a real win-win for TransLink and our customers,” said TransLink CEO Kevin Desmond in a news release.  “Commuters will be able to access the most up-to-date transit information and plan their trips using different modes around our network.  These high-tech devices come in addition to existing journey planning services already available.”

In the event of any serious emergency, TransLink can take over the entire screen and use the device to alert commuters of issues or delays.

It’s unclear which Burnaby or New Westminster locations will receive the kiosks.

“Suitable locations are now being identified with the rollout of additional kiosks to occur progressively over the coming months and into the start of next year,” said a news release.