Transport pricing for Vancouver not envisioned until 2025

Residents, business operators to be consulted before implementation
Nov 3, 2020 4:44 PM By: Mike Howell 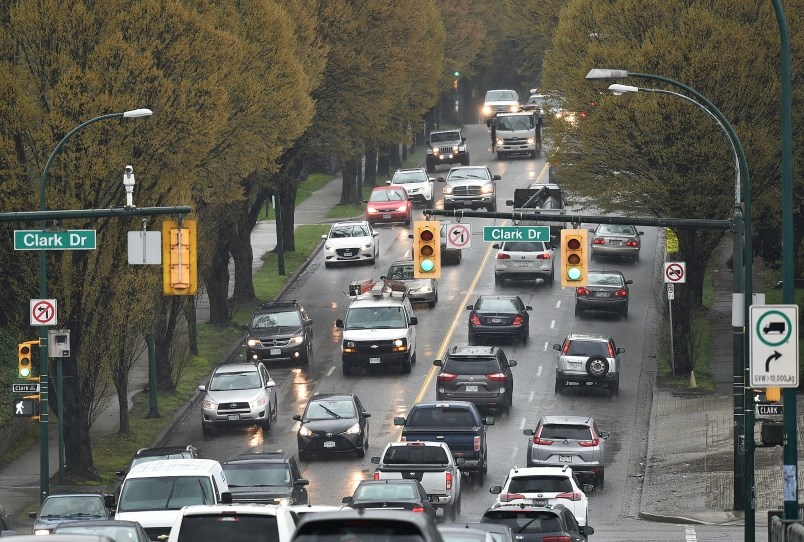 Vancouver city staff say a plan to charge drivers who enter the city core will not be in place until 2025, if city council approves the concept on Thursday. File photo Dan Toulgoet

Vancouver city staff made it clear Tuesday in a presentation to city council that its proposed plan to charge drivers a fee when entering the city centre will not be done without consultation from business operators and residents.

The proposal, which is an element of a wider plan to fight climate change, is also not anticipated to be in place until 2025, if council agrees to the concept and others when it reconvenes Thursday for a decision.

Matt Horne, the city’s climate policy manager, said a 2025 implementation date gives staff more time to improve infrastructure for walking, cycling and rolling and align with the opening date of the Broadway subway.

At least five more corridors that prioritize transit should also be in place by 2025, said Horne, who emphasized that transport pricing — also referred to as mobility or congestion pricing — can help motorists.

“The people who need to drive also benefit — based on our review of other systems — because there is reduced congestion and faster and more reliable travel times,” he said, cautioning the move is not to burden people with less financial means who need a car to access services such as childcare.

More details on how such a system would work will emerge next year, if council approves the concept. The cost of the fee, how a driver is charged and who would be exempt are questions to be answered as staff completes its work.

Staff’s view is that Vancouver could serve as a testing ground for a wider regional transport pricing system. Council heard that other cities in the world that introduced transport pricing first did so in the city core.

While some cities have restricted the fee zone to the core, others have extended it across a region. In Vancouver, the proposed fee zone would cover downtown and extend south to 16th Avenue between Clark Drive and Burrard Street.

Staff’s “climate emergency action plan,” which was described by staff Tuesday as ambitious and relies heavily on funding and policy decisions from senior governments, was released to the public last week.

More than 30 recommendations are contained in the 317-page plan aimed at reducing carbon pollution from vehicles, buildings and new construction.

While it was celebrated by some city councillors and Canada’s most famous environmentalist, David Suzuki, business leaders criticized the transport pricing component of the plan.

That criticism has largely been based on businesses already hit hard financially by the pandemic and the corresponding need to help them recover, not add a system that discourages motorists from travelling downtown.

Charles Gauthier, president and CEO of the Downtown Vancouver Business Improvement Association, told Glacier Media last week that transport pricing “has to be parked for now.”

Greater Vancouver Board of Trade president Bridgitte Anderson said in a news release Monday that charging drivers to enter the city centre “could spell disaster” for downtown businesses already struggling with financial strains caused by COVID-19.

Anderson said downtown has been “hollowed out” because of the pandemic, with overall office occupancy rate ranging between 10 and 40 per cent. Many businesses, she added, were already battling for their survival prior to the pandemic in part to increased costs, regulations, property taxes and fees.

“What’s more, [the board of trade] is also concerned that the city-centric strategy also fails to deliver a holistic approach that serves the entire region, all the while adding millions of dollars in increased costs,” Anderson said.

“Consideration for the movement of goods is conspicuous by its absence, calling into question Vancouver’s continued role as a gateway for trade and commerce.”

In a letter to mayor and council, Anderson acknowledged it was vital to address climate change and agreed with various elements in the plan, including but not limited to improving bus speeds and reliability.

Reductions in parking minimums for new buildings where appropriate, the expansion of charging infrastructure for electric vehicles and improving the walkability of neighourhoods are other elements favoured by the board of trade.

But Anderson noted in her letter that a good portion of the recommendations in the transportation section of the report all appear to be focused on raising revenue.

Council heard the plan is estimated to cost taxpayers $500 million, if implemented over the next five years. Coupled with that are anticipated investments of $1.3 billion over the next 10 years from business operators and residents for such purchases as heat pumps and electric vehicles.

The good news, Horne said, is those investments will see significant long-term savings and lead to behavioural changes to how people live and get around the city. Total anticipated savings would be $2.2 billion.

“So roughly a net $1 billion savings,” he said. “We think that’s a pretty positive story in terms of what this transition can point to.”

Gil Kelley, the city’s general manager of planning, urban design and sustainability, said the pandemic has focused and accelerated the city’s climate change plan, noting “we have been hit with a major shock and stressor” in Vancouver.

“If anything, the climate emergency will be much greater than the COVID impact has been, and much longer lasting,” Kelley said.

More than 70 people have registered to speak to council about the climate plan, including business leaders, doctors, cycling advocates, home builders, economists and faith leaders.

The meeting begins at 3 p.m. Thursday.