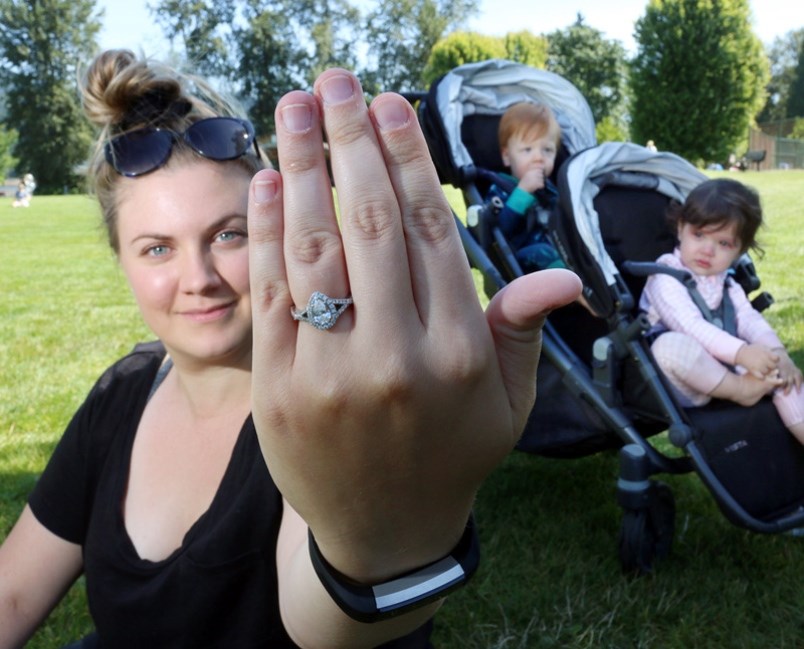 Olivia Soquila was on a picnic in Port Moody's Rocky Point Park when she lost her wedding ring in the grass. It was found by a hobbyist metal detector who's created a global network of simllar afficianados who help reunite people with their lost jewelry. Photograph By MARIO BARTEL/THE TRI-CITY NEWS

A Port Moody woman who lost her one-of-a-kind wedding ring is breathing a sigh of relief after the kingpin of a global network of treasure hunting sleuths tracked down the keepsake in time for her anniversary.

Olivia Soquila first noticed something was missing weeks earlier, after a picnic with a friend and her twin infant children at Port Moody’s Rocky Point Park.

Soquila said her “heart stopped” when she realized at the end of a busy day that the ring, a large precious stone set on a teardrop-shaped bed of small diamonds, was no longer on her finger. Her mind raced from the window sill behind her kitchen sink where she removes it to do dishes to the park when she went to apply sunscreen to her children.

That night she spent three hours raking through the grass near Pajo’s fish and chips, a headlamp affixed to her head, her quest complicated by the thick bed of grass clippings that had piled up from a mower while she was gone.

“I thought for sure it would be damaged,” Soquila said.

Despite her methodical search, the ring didn’t reveal itself.

Soquila retraced her steps to and from where she had parked on Murray Street that morning.

Devastated, Soquila said she tossed and turned through the night, brooding over a ring she said has tremendous sentimental value. Her husband had designed it himself, and since he presented it to her, it had accompanied them on travels to places like Morocco and France. It was on her finger when she gave birth to her children.

“There’s so many memories attached to it,” she said. “It’s just such a part of me.”

She was at her wit’s end when she posted a plea for help on a Facebook group for Tri-City moms. From somewhere on the social network, a link popped up: “The Ring Finders.” She called, then headed back to the park for another look as she waited.

A Vancouver-based treasure hunter, Chris Turner has built his metal detecting abilities into a global enterprise of like-minded hobbyists across 22 countries, each using their electronic detectors to ferret out misplaced valuables.

It’s the heartfelt stories that tweaked him to the idea of using his metal detector to affect reunions, or, if the valuable proves too elusive, at least give them closure.

“Every ring has an amazing story attached to it,” he said. “You become a part of that story.”

With some help from a fellow Illinois-based metal detector who also happened to have some skills building websites, Turner has expanded his reach beyond the Lower Mainland to create a global network of about 470 ring finders who, he said, have amassed about 6,000 recoveries over the past 10 years.

The jewelry sleuths work only for gas money and whatever a client can afford to pay.

Turner said the satisfaction goes far beyond a few dollars in his pocket.

“It’s the greatest feeling in the world,” he said of a successful search.

But success, it turns out, is as much good detective work as it is electronic wizardry. It begins with a detailed interview, where Turner takes his clients back to the moments leading up to when they realized their prized possession had gone missing. That narrows the search field. The electronics do the rest, mapping out the size and mass of a metallic object by interference with the device’s signal.

Soquila said she was calmed by Turner’s attention to detail and his constant play-by-play of what he was doing as he scanned the grass in a grid pattern where she had laid out her picnic. After about 40 minutes, Turner looked up and called her over.

“Is this your ring?”

Soquila said it took her a few moments to process what was in his hand. Then came a flood of tears.

“It felt like he was proposing to me,” she said of Turner’s outstretched hand with her ring pinched between his fingers.

Passersby who’d gathered to watch the search and offer moral support burst into cheers and applause.

Turner, who’s travelled across the province to conduct searches, said he goes into every quest confident it will be successful. Improvements in technology over the years, with visual displays, increased range and waterproof detectors, have boosted the odds. But the satisfaction of handing a valued treasure back to its owner remains as satisfying as those early treasure hunts.

“I’ve found my niche in the world,” he said.

* For more information about The Ring Finders, go to www.theringfinders.com.