The October 2016 sinking of a tug boat near Bella Bella that released approximately 107,552 litres of diesel fuel and 2,240 litres of lubricants has resulted in Canada’s largest ever penalty under the Fisheries Act – $2.7 million.

The Nathan E. Stewart was operating in Seaforth Channel near Bella Bella when it ran aground at Edge Reef on Oct. 13, 2016. It had been en route from Ketchikan, Alaska to Vancouver. 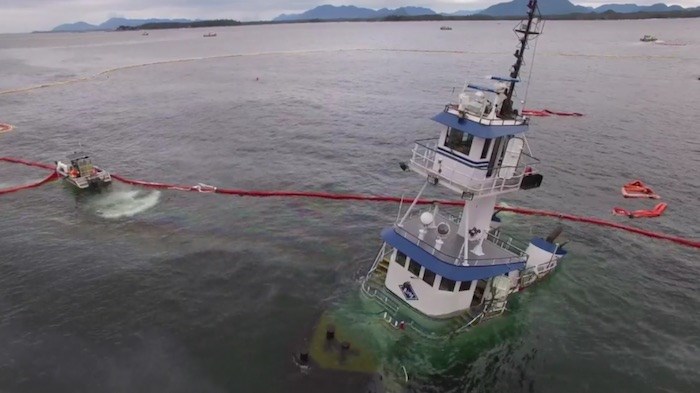 The 2016 sinking of a tugboat near Bella Bella led to the spill of 107,552 litres of diesel fuel and 2,240 litres of lubricants. Screengrab from video, Heiltsuk First Nation of Bella Bella, submitted

Transportation Safety Board (TSB) documents show salvage divers attempted to stop the diesel oil in the tug from leaking and that 119,000 litres of diesel oil and lubricants were removed from the tug.

There was a further $5,000 fine for failing to comply with the pilotage requirements under the Pilotage Act.

The fine funds will be directed to the Government of Canada’s Environmental Damages Fund and is recommended for work in conservation of fish and fish habitat in the Central Coast region of British Columbia.

The $200,000 penalty for the offence under the Migratory Birds Convention Act, 1994 will also be directed to the fund.

TSB documents state 45 vessels and more than 200 people were involved in response to the sinking and spill.