"Many of the issues that Trump has been able to mobilize people around are issues that we also encounter in our own context."
Jan 7, 2021 8:18 PM By: Elana Shepert 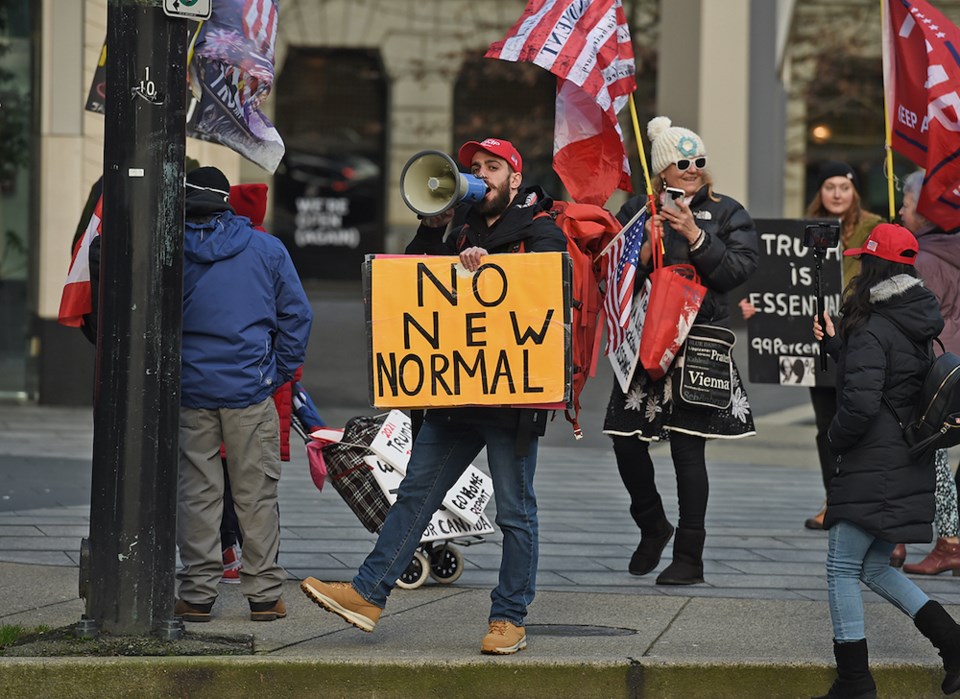 Pro-Trump demonstrators gathered outside of the Vancouver Art Gallery this week to protest the result of the United States presidential election.Photo via Bob Kronbauer / Vancouver Is Awesome

Pro-Trump demonstrators gathered outside of the Vancouver Art Gallery this week to protest the result of the United States presidential election.

But many Canadians question why the protestors feel so impassioned about an election south of the border--particularly when that passion leads to violence.

Vancouver Is Awesome's Editor-in-Chief Bob Kronbauer was shooting photos at the small rally on Wednesday, Jan. 6 when one of the demonstrators punched CBC photojournalist Ben Nelms in the face, completely unprovoked.

While Kronbauer said that most of the protestors were relatively harmless (aside from some verbal attacks on strangers), many people have questioned why locals so passionately support Trump.

Dr. Maxwell Cameron, a professor of political science at the University of British Columbia, tells V.I.A. in a phone interview that it isn't altogether surprising that Canadians have taken an interest in the United States election. The two countries share a border and have strong economic, cultural and political ties.

"Many of the issues that Trump has been able to mobilize people around are issues that we also encounter in our own context," he explains.

While Cameron cautions against exaggerating the impact that the U.S. president has locally, he notes that a threat to the democratic process south of the border should concern us.

"When the single most powerful country in the world, which is one of also one of the world's oldest established democracies, stumbles--It makes democracies everywhere more vulnerable."

However, Cameron adds that the media environment is significantly different in the United States than it is in Canada: "Fox News and cable TV have been a really important part of this process. And, and we don't have that in Canada in the same way--as anybody who travels between Canada and the United States will immediately experience a very different media environment.

"I think there's much more sanity in our public discourse."

The power of social media

Despite the decidedly different tone of Canadian media, Cameron says that social media has played an important role in shaping modern democracies around the world. The United States is no exception, and it is a powerful influencer.

Trump has utilized multiple online platforms to garner support from his devout followers, as well as to try to discredit anyone who criticizes him.

“I don't like anybody being censored or taking away from the right to post a message on Twitter or Face(book). I don't agree with that, I don't accept that,” López Obrador said.

When asked whether Biden's presidency will quell the passionate rebellion south of the border and around the globe, Cameron notes that the official transition of power won't silence Trump's loyal base or end their belief that the election was fraudulent. But that should remind us how important--as well as how vulnerable--our democratic institutions are.

"We have a responsibility to one another as citizens to uphold our constitution and our democratic institutions," he underscores.

"They're just too precious to take for granted."

--With files from Bob Kronbauer, the Canadian Press and the Associated Press.