The abandoned aluminum boat was spotted on a river bank by a search helicopter. 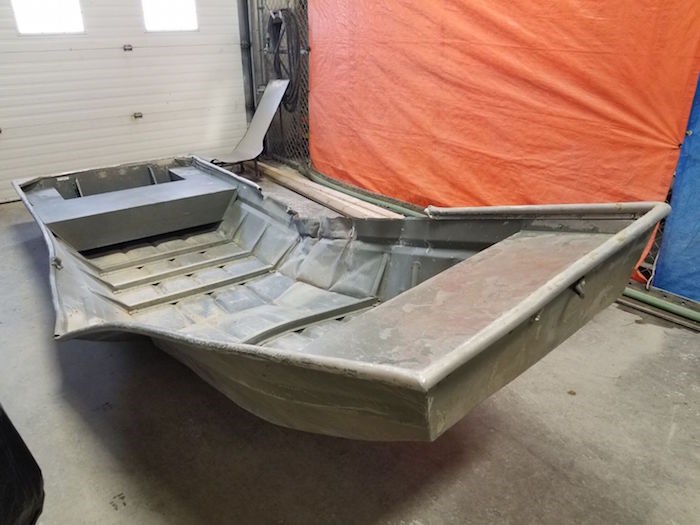 A damaged aluminum boat found in Manitoba has prompted the launch of an underwater search for B.C. fugitives. Photo courtesy Manitoba RCMP

"Based on this new information, five members of the RCMP Underwater Recovery Team were immediately deployed" RCMP said. "They arrived in Gillam on Saturday,

August 3rd, and are expected to conduct a thorough underwater search of significant areas of interest today."

Canada-wide warrants have been issued for Kam McLeod, 19, and Bryer Schmegelsky, 18, who are charged with second-degree murder in connection to the death of Leonard Dyck, who was found a few kilometres from the teens’ burned-out pickup truck on Highway 37 near Dease Lake July 19.

The Port Alberni childhood friends are also suspects in the killings of American Chynna Deese and Australian Lucas Fowler. Their bodies were found along the Alaska Highway on July 15 near a van they had been travelling in.

Charges have yet to be announced in that investigation.

The pair were spotted in Saskatchewan early last week and then a car reportedly connected to them was found torched near Gillam. A house-to-house search was undertaken before forces moved to Nearby York Factory last Sunday after an unconfirmed sighting of two men scavenging in the town dump.

The sighting led to a community lockdown and heavy search. A similar search was done of the Gillam area. RCMP said dive team members are highly trained with each person having to pass a three-day selection process before undergoing an intensive five-week underwater recovery course.

UPDATE: On Sunday evening, Manitoba RCMP announced the dive portion of the investigation was complete.

The Underwater Recovery Team has completed their work following the discovery of a boat on the shore of the Nelson River. They will not be conducting any additional dives. A police roadblock has been put in place today in the Sundance, MB, area for ongoing search efforts. #rcmpmb pic.twitter.com/mKSR7xieVh