The project will have 63 units of new long-term housing for women and families who were previously homeless.
0
May 31, 2019 7:11 AM By: Frank O'Brien

As a recent survey shows Vancouver has a nation-leading average rent of nearly $3,000 for a two-bedroom apartment, the Union Gospel Mission (UGM) will deliver new homes for about a tenth of that on the Downtown East Side. 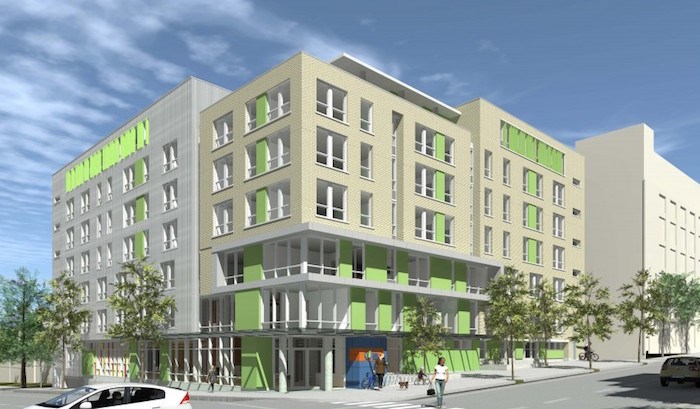 Expansion to the Union Gospel Mission on the Downtown Eastside will include 63 long-term apartments for homeless women and children. Photo courtesy UGM

The seven-story building will increase capacity to 135 beds from the previous building’s 21 and provide 63 units of new long-term housing. The 77,000-square-foot centre will also include childcare spaces, emergency supports and a long-term addiction recovery program for women, the only program of its kind in the Downtown Eastside.

“When I was homeless, it was horrible,” says former UGM resident and single mother Emily Surrette, who was on B.C. streets for more than two years. “I’m really excited about the new building because it’s essentially a one-stop shop: daycare, treatment, housing, all of these things.”

Rentals.ca’s National Rent Ranking for May found that Vancouver had the highest rent for a two-bedroom unit in Canada, at $2,915 per month, and ranked the fourth-most expensive city for rent across the country, with one-bedrooms costing an average of $1,828.

At the UGM’s new building, rents for tenants on social assistance are capped at $375 per month, but the rent can be waived in hardship cases.

“UGM works to accommodate and serve those who for some reason can’t access the shelter portion of income assistance,” a spokesman explained.

Residents who acquire employment would pay no more than 30% of their income for rent.

The new building, slated to open in 2021, is made possible by private donations and capital funding from all three levels of government: $14.5 million from the province through BC Housing and the Ministry of Children and Family Development; $11.375 million from the federal government; $1.6 million from the City of Vancouver, along with $1.1 million in development cost levy waivers; and $720,000 from the Streetohome Foundation, whose donors include some of Vancouver’s largest real estate developers.

“The lack of affordable housing in our city continues to be a critical challenge, and UGM’s new centre will provide life-changing support for women and children in the Downtown Eastside,” said Vancouver Mayor Kennedy Stewart.