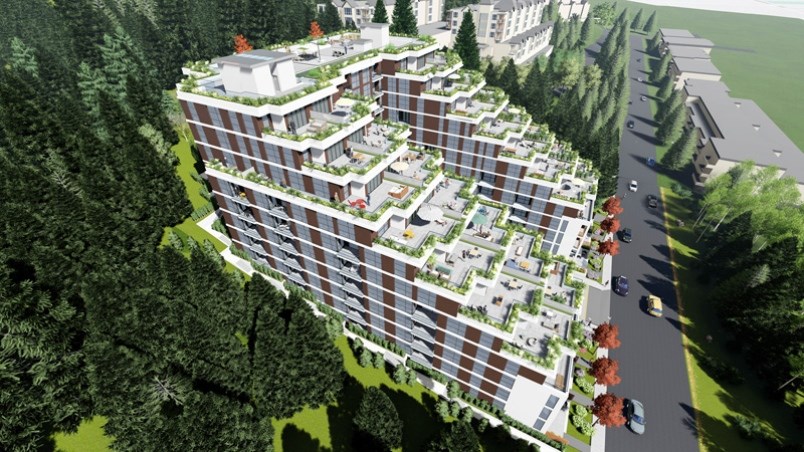 A rendering of a terraced condo building being proposed for 3000 Henry St. in Port Moody. PHOTO SUBMITTED

A condo project 14 years in the making is closer to finally getting built.

The proposal’s proponents said the community, as well as the building’s future residents, have been better served by the protracted process.

Coun. Zoe Royer said the terraced, U-shaped structure nestled into the foot of the Chines hillside is “the perfect marriage between the natural environment and the built environment.”

Moreover, Coun. Meghan Lahti said, the developer’s plan to make 17 units more affordable to Port Moody residents through a rent-to-own program, a provision to build six lock-off suites that can accommodate extended families or be divided to create an income property, as well as a partnership with Kinsight to manage a large ground-floor unit that will allow several of its clients to live independently with supports “is a unique opportunity.”

Phillip Scott, a real estate development consultant who’s acting as the project’s manager, said its long gestation has resulted in a “much more inclusive and creative building” that will be a “landmark” in the city.

The project got as far as third reading eight years ago then was put on hold for six years over concerns about geotechnical, environmental and stormwater management issues. It was briefly revived by another developer in 2018 before it was acquired by Vancouver-based Aultrust Development, whose managing partner is Port Moody’s Navid Morawej.

Morawej conceded the project “does have an extensive history” but, he told council, his company’s effort to address affordability issues has generated “lots of interest” in the community about its rent-to-own program.

Architect Tim Ankenman said while the overall design of the building has remained much the same as was first proposed in 2006, enhancements to some of its ingredients like engineering refinements to ensure the stability of the steep slope at the back of the property, amenities such as work-share spaces and green roofs and a commitment to protect two nearby streams as well as dedicate more than half the property as parkland have made the project “a lot richer.”

Council’s assent came after a public hearing in which several young people expressed optimism the rent-to-own program might allow them to afford to buy a home in Port Moody, while some neighbours were leery about the project’s impact on traffic, especially when the nearby middle school is in session, as well as concerns about the stability of the steep hillside.

“It’s a good project, just at the wrong location,” said one speaker.

But Port Moody’s general manager of planning and development, André Boel, said should the project get its final green light to go ahead, “our main goal… is to make sure it is built appropriately.”