Most Vancouverites will be able to relate to this hilarious mock music festival poster.
Jan 4, 2020 12:43 PM By: Elisia Seeber 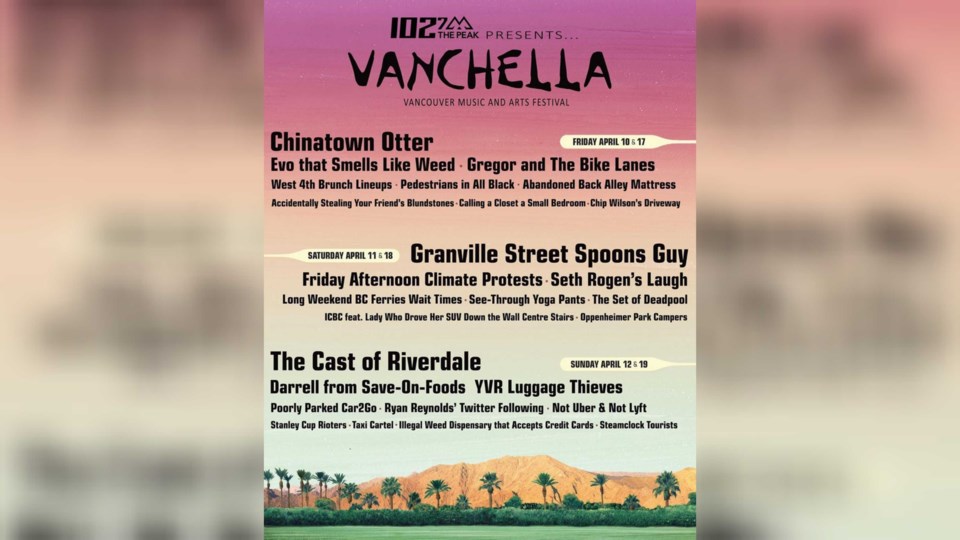 Vancouver’s 102.7 THE PEAK radio host Clinton Herman told Vancouver Is Awesome he made the poster on Friday for a bit of fun, and as a local take on an international music story. Photo: 102.7 THE PEAK
A mock music festival poster titled ‘Vanchella’ that pokes fun at Vancouver life is making the rounds on social media — and it’s bound to make you laugh.

Vancouver’s 102.7 THE PEAK radio host Clinton Herman told Vancouver Is Awesome he made the poster on Friday for a bit of fun, and as a local take on an international music story.

It’s a hilarious mock-up of the line-up poster for the annual Coachella Valley Music and Arts Festival — which takes place in the Colorado Desert in California in April — using classic Vancouver scenarios, complaints, celebrities and events as the band names.

The ‘Vanchella’ poster highlights bad drivers, car-share complaints, lack of ride-hailing, the expensive rental market, tourists, quirky people, yoga sweatpants, cannabis … things most Vancouverites could relate to in some way, or have come across.

The line-up includes ICBC ft. Lady Who Drove her SUV Down the Wall Centre Stairs, Evo that Smells Like Weed, Gregor and The Bike Lanes, Calling a Closet a Small Bedroom, Chip Wilson’s Driveway and Pedestrians in All Black.

The Chinatown Otter is also a lead act — made famous for eating the koi from the Dr. Sun Yat-sen Classical Chinese Garden. The Granville Street Spoons Guy and Darrell from Save on Foods also made the cut.

Celebrities get a mention in the line-up too; Seth Rogen’s Laugh, Ryan Reynold’s Twitter Following and The Cast of Riverdale will be making appearances.

The poster release lines up with the presale of Coachella tickets for the festival’s second weekend. The presale begins on Monday, Jan. 6 at noon, any remaining tickets will then go on sale at 3 p.m. The first weekend of the festival has already sold out.