"To me the message is very clear, because saying 'I love J.K. Rowling' very much means that you identify very clearly with a figure who has been widely condemned for herself speaking out against the trans community."
Sep 12, 2020 4:55 PM By: Megan Lalonde 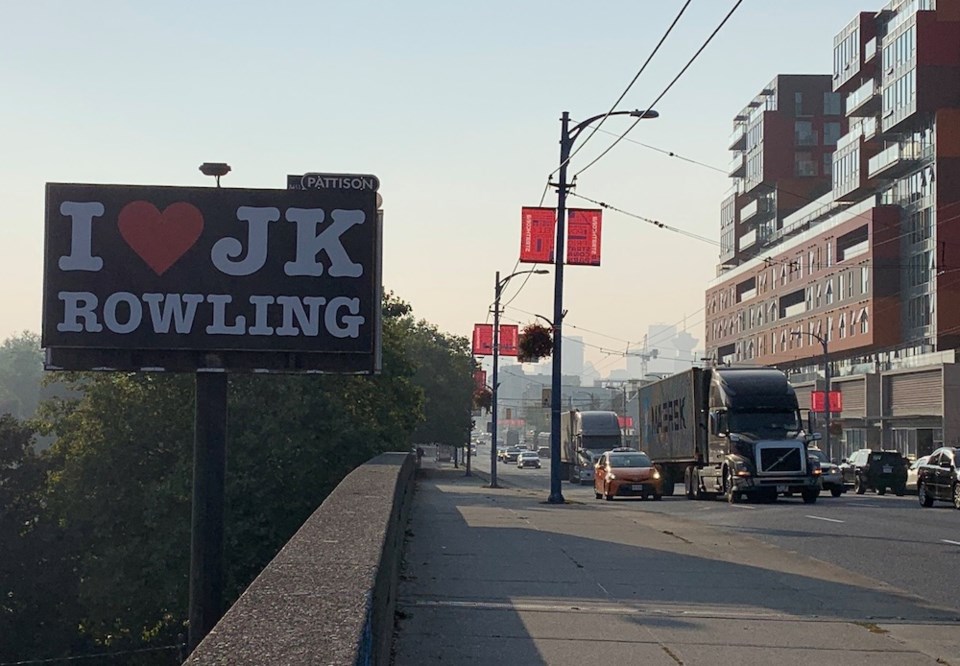 A Vancouver billboard plastered with a message of support for J.K. Rowling was swiftly covered up Saturday afternoon after sparking a firestorm of outrage on social media.

Friends Chris Elston and Amy Hamm paid for the message, which read, "I ❤️ JK Rowling," to appear on a massive billboard located at East Hastings Street and Glen Drive, owned by advertising company Pattison Outdoors.

In a tweet posted early Friday evening, Elston shared a photo of the "swanky billboard" that he said was motivated by his admiration for the Harry Potter author, thanking her "for standing up for women and children" and calling her "an inspiration."

Rowling has been widely condemned by the LGBTQ community and its allies since last December, when she voiced her support for a U.K. researcher who was fired for stating her belief that “it is impossible to change sex." She came under further fire in June, after doubling-down on that stance while criticizing an opinion piece that used the phrase “people who menstruate.”

“I’m sure there used to be a word for those people," the famous British author tweeted at the time. "Someone help me out. Wumben? Wimpund? Woomud?”

She continued, “If sex isn’t real, there’s no same-sex attraction. If sex isn’t real, the lived reality of women globally is erased. I know and love trans people, but erasing the concept of sex removes the ability of many to meaningfully discuss their lives. It isn’t hate to speak the truth.”

Vancouver city councillor Sarah Kirby-Yung is one of many local residents who voiced her opposition to the billboard after seeing it on her Twitter feed Saturday afternoon.

A little more than an hour after Kirby-Yung posted the above tweet, Elston shared a video on the social media platform showing the billboard—which had already been vandalized with paint—being plastered over, just one day after it went up.

When reached by phone Saturday afternoon, Kirby-Yung said her initial reaction to the billboard was that "It was a no-no."

"Right now there's so much happening in our city and it's such a tough time for people with the pandemic, and we're seeing rising incidents of hate in the city. We've seen increasing, sort of, calling out of our cultural communities ... and now we see another manifestation with this billboard," she explained.

Kirby-Yung said she interpreted the message as "an intentional action to specifically condemn the trans community," with a conscious effort to skirt around hate speech guidelines.

"To me the message is very clear, because saying 'I love J.K. Rowling' very much means that you identify very clearly with a figure who has been widely condemned herself for speaking out against the trans community."

In an open letter addressed to Pattison Outdoors and posted to Twitter, Elston and Hamm wrote, "We did this because we were inspired by Rowling standing up for the rights of women, girls and children."

They said "Rowling is not transphobic, and neither are we. Like her, we are concerned about the impact of gender identity ideology on the rights on women and girls."

The pair continued on to state their belief that "most Canadians recognize that 'woman' is a biological reality, rather than a feeling."

Elston and Hamm signed off by asking the advertising company to "stand with us, stand with women, and stand up for free expression."

As Kirby-Yung explained, scenarios like the one at hand are made complicated when messages are displayed on private property, in this case a billboard owned by an ad company, and leave City officials with little power.

"It is always tricky because we have the Charter of Rights and Freedoms protecting freedom of speech, and the definition of hate speech is a very stringent one to fall under," she said. "I think that the few individuals that I understand were behind this billboard are very well aware of that."

However, the Pattison Outdoors site is still governed by Canadian advertising standards, Kirby-Yung noted, adding that she had already reached out to City of Vancouver staff "to get more specific information about this particular location and see if the City has any recourse," given its relationship with outdoor advertisers.

While it remains unclear who made the decision to cover up the billboard's message, Kirby-Yung said "it's fantastic" to hear action was taken to erase the inflammatory content in short order.

"I'd like to understand more details about whether that's action taken by Pattison or the City, but I think quick action sends such an important message to our trans community that they are supported."

Rowling also made headlines in Vancouver earlier this year, when she threatened legal action against a Metro Vancouver transgender activist who tweeted that the author "can no longer be trusted around children.”