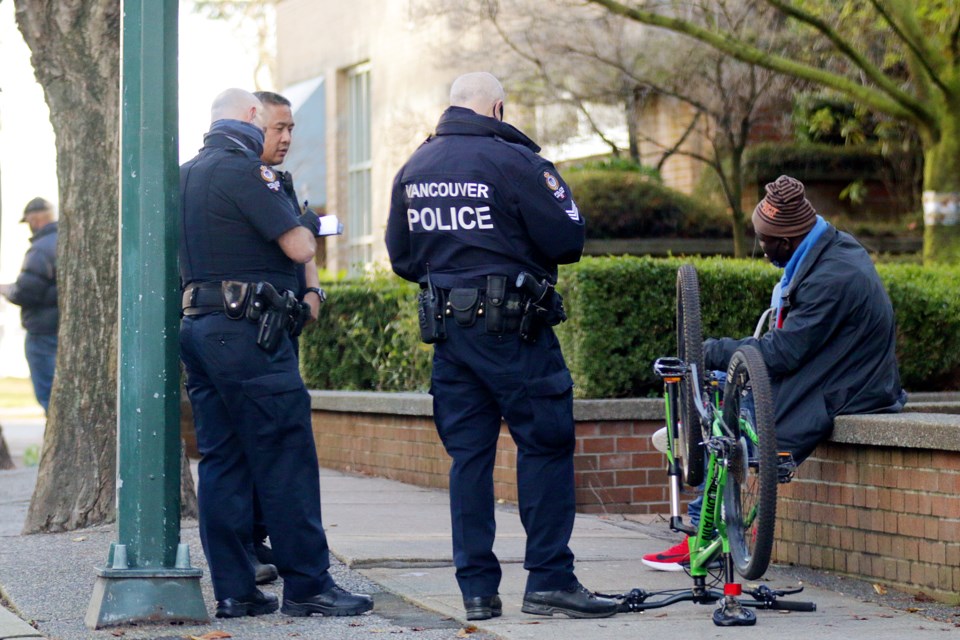 The Vancouver Police Board approved a $6.4-million increase last week to the VPD’s budget for next year, but city staff have recommended council cut the VPD’s budget by $3.1 million. Photo Rob Kruyt/BIV
City council’s expected vote Tuesday on a $1.599-billion operating budget for 2021 will reveal how its support for a motion in July to “deprioritize policing” for issues such as mental illness and drug use matches up against the Vancouver Police Department’s refusal to cut its budget.

The vote comes after a week that began with the Vancouver Police Board approving a $6.4 million increase to the VPD’s operating budget for 2021 and ended with many of the 139 speakers to council calling for police money to be diverted to services that address mental illness, addiction, sex work and homelessness.

Though the police board approved a $322-million operating budget for the VPD, it is now up to council to decide whether the total request is warranted, given that city staff has recommended the police operate with a budget of $318 million next year.

That decision will be made by a council that backed Coun. Jean Swanson’s motion in July to have issues such as mental illness, sex work, homelessness and substance use be responded to with initiatives led by community, health agencies, social service providers and non-profits instead of police.

Mayor Kennedy Stewart and eight councillors were unanimous in their support, with councillors Melissa De Genova and Sarah Kirby-Yung recusing themselves from the vote, citing a possible conflict over the fact their spouses are VPD officers.

The motion is not reflected in the draft operating budget, but itemized as a consideration and attached to $300,000 of spending for next year, which would focus on planning work to determine how to shift the response to social issues away from police.

Councillors are expected to move several amendments during debate Tuesday, with Swanson likely to request the $300,000 be added to next year’s operating budget, which would mean cutting or not spending money earmarked for another item, or items.

At the same time, city staff has recommended a $3.1 million cut to the VPD’s 2021 operating budget, a move the police board and department warned will return staffing levels to pre-2009 numbers by delaying recruitment of 34 officers needed to replace retiring officers.

“This would result in longer response times and officer burnout, and could mean the scaling back of proactive VPD outreach programs that foster community safety,” police board finance committee chairperson Frank Chong said in a statement Monday.

The mayor, who doubles as the police board’s chairperson, announced Monday to people who subscribe to his email list that “we need to hold the [VPD] budget at its current 2020 level while at the same time moving ahead with reform.”

The mayor’s position aligns with the response of five councillors who told Glacier Media in June the VPD should have trimmed one per cent from this year’s budget to fall in line with other city departments that took cuts to offset the pandemic-related revenue loss incurred.

The VPD released a report last week in response to council’s motion, titled “Our Community in Need: The VPD’s community-focused safety strategies.” The report says the VPD acknowledges that mental health, homelessness, substance use and sex work intersect with public safety.

“The VPD takes efforts to ensure inappropriate, ineffective and unnecessary criminalization does not occur, but rather focuses on community-based, harm reduction strategies in collaboration with community service providers,” said the report, which noted police have not arrested or charged a sex worker for the act of prostitution since September 2008, and only charged 16 people last year for simple drug possession.

Palmer told Glacier Media in an interview in June that if the community wants to see police do things differently, then he wants to be part of the discussion and that it should include senior governments, health authorities and the justice system.

They included a sex worker, a Canadian army veteran, the owner of the Roxy nightclub, serving and retired police officers, people who use drugs, social workers, relatives of drug overdose victims, police board members and business associations.

Nurse Fraser Macpherson told council he works with people who experience violence related to poverty and homelessness. He spoke against any increase to the VPD’s budget, emphasizing council had to make good on the motion supported in July to shift funding from police to community-based alternatives to responding to crises.

“We do not need armed officers to hand out sleeping bags or tents to folks who are homeless,” Macpherson said.

“That can be done by peers who have far more skills and resources to foster connection and treat people with dignity and respect. We don’t need armed officers to respond to wellness and safety checks. This can also be done by peers, or by trained crisis intervention workers, or peers and clinicians trained in non-violent de-escalation. The call to ‘defund’ is actually a call to fund our community.”

Jason John, a co-captain of a Blockwatch group in Kitsilano, urged council to increase funding for police, noting crimes are up and that he had his truck broken into five times in the past 14 months.

John said he also caught a guy trying to pick the lock of the front door to his house. He’s installed a higher fence, a camera system to monitor the front of his house and recently bought bear spray for his 20-year-old daughter, who likes to jog and sometimes gets hassled by motorists.

“I would like the VPD to have more money and hire more officers and have more presence on the street,” he said, noting population growth continues to outpace the number of police officers hired over the past decade. “If we have less police officers, it’s going to make matters much worse.”

Council meets at 9:30 a.m. Tuesday to debate and likely vote on the overall operating budget, which staff have proposed at $1.599 billion and based on no more than a five per cent property tax hike.

The VPD’s portion accounts for 21 per cent of the budget.