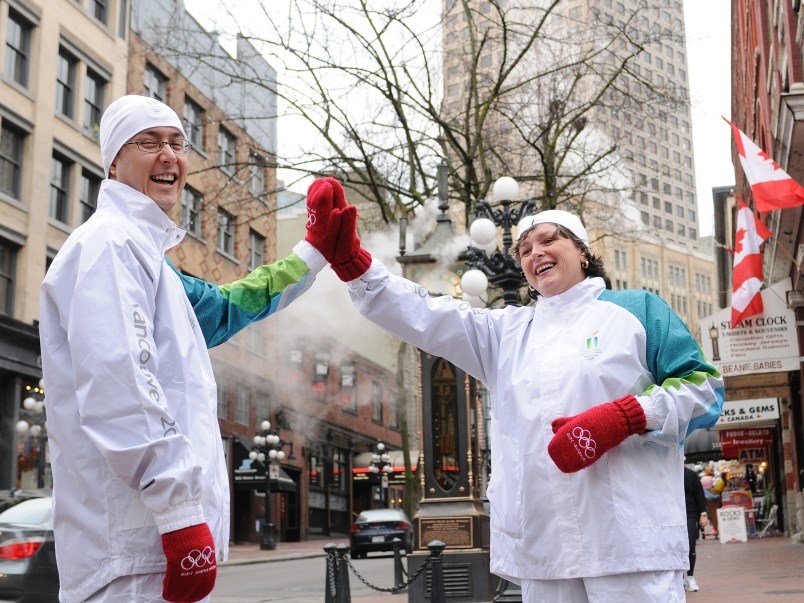 Vancouver hosted the 2010 Winter Games and Paralympics, where citizens such as Marc Andre Choquette and Cindy Crapper carried the Olympic torch. File photo Dan Toulgoet
City council voted 7-4 Wednesday to direct staff to conduct preliminary work on the feasibility of hosting another Winter Olympics and Paralympics in Vancouver and to report back with findings before the end of next April.

The request was led by Coun. Melissa De Genova, whose motion to have the city consider an Olympic bid in 2030, never got heard at a scheduled meeting in April. The meeting was cancelled over precautions taken related to physical distancing measures.

De Genova said she has received emails and phone calls from residents who wanted to speak to her motion in April and still want to give their opinions on another possible bid for the winter events.

“Let speakers come out on either side — support or against — to help inform us of what they want, and to see where things will be at in a few months with the pandemic and what our [economic] recovery looks like,” she told council.

De Genova’s motion was supported by Mayor Kennedy Stewart and councillors Rebecca Bligh, Michael Wiebe, Adriane Carr, Lisa Dominato and Sarah Kirby-Yung, who took a similar stance to De Genova on the need for a staff report and hearing from residents.

“If there are pitfalls, then let’s have good conversations about what those might be and have an informed dialogue about it,” said Kirby-Yung, emphasizing the need to explore leveraging social and low-income housing and ways to continue building relationships with the four host nations of the 2010 Olympic Games.

Councillors Jean Swanson, Christine Boyle, Pete Fry and Colleen Hardwick opposed the motion, with Swanson and Fry concerned an Olympic Games would not help deal with the city’s homelessness and affordability housing challenges.

“In the Downtown Eastside, everybody pretty much understands that had we spent money on ending poverty and homelessness that we spent on the Olympics, that we could have done that,” she said.

“I’m actually very uncomfortable with the idea of promoting something during a climate emergency that involves a bunch of flying around in airplanes all over the world. So I think there’s lots of reasons that we should just stop this idea right now.”

Fry noted he lives in Strathcona, a few blocks from the homeless camp in Strathcona Park and not far from the Ray-Cam and Strathcona community centres, which serve some of the most vulnerable children in the province.

He described the community centres as “under-resourced and threadbare,” saying opportunities to improve conditions for the city’s most vulnerable were squandered during the 2010 Games.

“I’m not comfortable referring this motion for staff to do the work because I’m worried the work we’re sending staff to consider and contemplate on this is not grounded in equity and the betterment of all Vancouverites,” he said.

Boyle said she appreciated the interest in hearing from the public about hosting another Olympics, but didn’t think it was an issue that should be explored at this point. Hardwick didn’t state her reasons for opposing De Genova’s motion.

The previous bid for the Olympics came after 86,113 people voted in a plebiscite in February 2003 to back the Games; 48,651 people opposed the bid. At the crux of the “no” side was the argument money spent on the Olympics would be better funneled into health care, education and housing.

De Genova pointed to the construction of the Canada Line, the Convention Centre, the Olympic Village development, the Hillcrest community centre, the addition of public art (large bird sculptures at Olympic Village) and the creation of jobs as benefits of the 2010 Olympics.

But in her closing remarks, she said she shared concerns raised by Swanson and Fry related to homelessness and poverty.

”I welcome all voices here, especially to the most vulnerable and marginalized in our community,” DeGenova said. “If we can’t leverage something big — if were’ talking about infrastructure [such as housing] — if we can’t do that for them, then why would we do this?”