Vancouver city councillor ‘shocked’ by report calling for his resignation 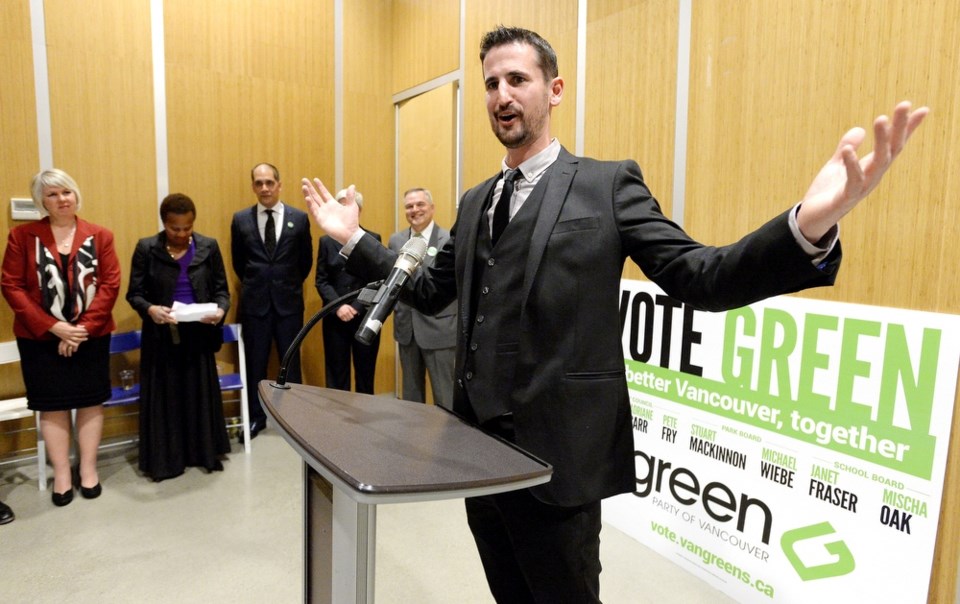 Green Party Coun. Michael Wiebe says he “acted in good faith” in votes that allowed temporary patios across the city, including one at his restaurant and another at a pub in which he is an investor. File photo Jennifer Gauthier

Green Party city councillor Michael Wiebe’s future on council is uncertain after an independent investigator recommended he resign because of votes he made in May that allowed temporary patios across the city including one at his restaurant and another at a pub in which he is an investor.

Wiebe, who owns Eight ½ restaurant in Mount Pleasant and has a business interest in Portside Pub in Gastown, told Glacier Media Sunday that lawyer Raymond Young conducted the investigation into conflict-of-interest allegations brought forward by a citizen named Michael Redmond.

Young also recommended Wiebe, who is one of three Green Party members on the 11-member council, be disqualified from holding office until the next election in October 2022.

Wiebe, a former park board commissioner, was elected to council in October 2018.

“I’m surprised by this because I thought we were still in the process [of the investigation] because I hadn’t had a chance to sit down and have an interview, or a Zoom call — and my legal team has not been involved at all,” Wiebe said.

“This is a bit of a shock, but obviously this is part of the system that we’re in, and there’s reasons why we have things in place so people can feel confident in their elected officials.”

Wiebe said he received Young’s report late Sunday afternoon after having to travel to Mayor Kennedy Stewart’s downtown apartment to get a copy. Stewart had a copy because it was his duty under the city’s Code of Conduct to arrange the investigation after Redmond complained.

Wiebe said he and Redmond agreed on Young to investigate the allegations.

“I just got the report in the last hour because it was not delivered to me,” said Wiebe, noting a report was supposed to be mailed to him last week, but never arrived.

“I haven’t fully had an opportunity to digest the document, or fully understand where I’m at.”

That said, Wiebe declared his innocence in the matter, saying he “acted in good faith in the decision making that I have made, with the knowledge and information I had. So, right now, that is currently where I stand.”

Wiebe would not share a copy of Young’s report with Glacier Media, but a story first posted on the Georgia Straight’s website Sunday and then on CBC’s website provided details from the report, including Young’s conclusion that “his conflict of interest actions cannot be viewed as an error in judgement made in good faith.”

The allegations relate to votes Wiebe made May 13 and 27 that advanced council’s temporary patio program to allow patios at restaurants, breweries and pubs.

The move was to assist businesses hit financially by pandemic-influenced physical distancing measures and provincial health orders that closed or reduced the operation of businesses.

Both the Eight ½ restaurant and the Portside Pub applied for patio licences — and received them — with Eight ½ restaurant being among the first 14 approved by the city. Wiebe is now running a business called Side Hustle Sandwiches out of the restaurant

Wiebe told Glacier Media in June after the city released the names of the 14 businesses granted temporary patios that he didn’t “benefit more than any other restaurant or business that applied for it, and I’m not gaining capacity to make more money. I’m able to try to sustain the business for another year.”

At the time, he said, he was assisting breweries such as the Electric Bicycle Brewing in Mount Pleasant get a temporary patio licence — a move, he added, that would only hurt the bottom line of his restaurant, which is a few blocks south of the brewery.

On Sunday, he lamented the state of the food service industry.

“For the industry these last couple of years…I mean I haven’t been able to take a penny out of the restaurant and I don’t see any money coming from Portside right now, either,” he said. “I think that this is an industry just holding on.”

The city’s Code of Conduct states: “A conflict exists when an individual is, or could be, influenced, or appear to be influenced, by a personal interest, financial [pecuniary] or otherwise, when carrying out their public duty. Personal interest can include direct or indirect pecuniary interest, bias, pre-judgment, close mindedness or undue influence.”

It was not clear Sunday what happens next in the process, or what weight Young’s report holds in whether Wiebe can remain in office. If Wiebe were to resign or be ordered to leave office, such a move would trigger a byelection.

Vancouver last held a municipal byelection October 2017 after former city councilor Geoff Meggs resigned to take a job as Premier John Horgan’s chief of staff. Hector Bremner won the vacant seat, only to be defeated in the 2018 general city election.

That byelection, which also included a contest for vacant school board seats, cost $1.2 million.