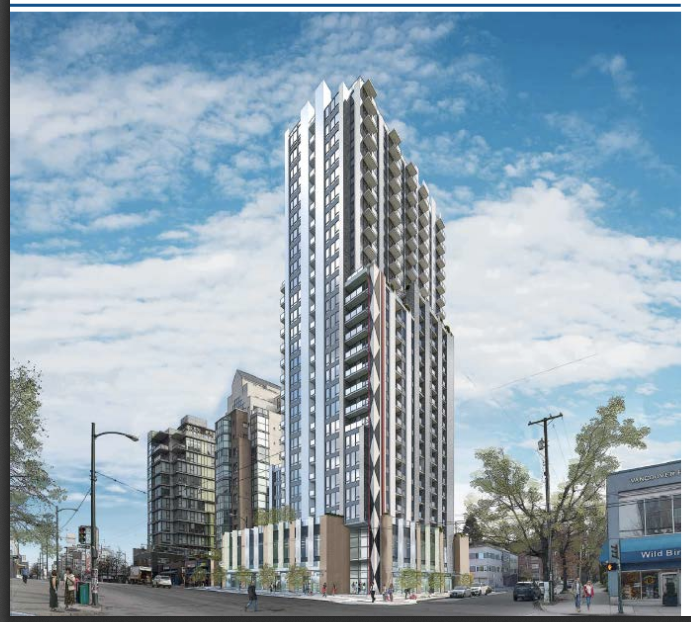 Vancouver city council has approved a controversial proposal for a 28-storey rental tower to be built on West Broadway at Birch Street that pitted neighbours opposed to its height against people on moderate incomes searching for a place to rent.

Council voted 6-5 Tuesday in what was described by Mayor Kennedy Stewart as a necessary move to build more affordable housing and inch towards the city’s 10-year goal of 72,000 new homes to be approved for construction by 2027.

“I know I was elected because the status quo isn’t working, and what I have to do is try new things to get housing that’s affordable, that people can pay rents in that $30,000 to $80,000 income bracket because that’s what’s missing,” said Stewart in stating his support for the project.

Councillors Jean Swanson, Colleen Hardwick, Pete Fry and Rebecca Bligh opposed the development based on concerns related to height, density and the gentrification of the neighbourhood.

“The process has been a flawed one, the height and massing and shadow studies are of serious concern,” Hardwick said. “The public consultation process and public confidence in this application I think has been very low, as we heard abundantly from the people who spoke.”

The breakdown of the vote saw the Green Party's Wiebe break from colleagues Fry and Carr, while the NPA's De Genova, Dominato and Kirby-Yung did the same with Hardwick, crushing any predictions that councillors were going to vote along party lines.

The project at 2538 Birch St. by Jameson Development Corporation will deliver 200 market rental homes and 58 others that will be geared to a person or household earning between $30,000 and $80,000 per year.

“Importantly, this project displaces nobody,” said Tony Pappajohn of Jameson Development in his closing comments Tuesday to council.

“This project provides much-needed workforce housing for major, medium and small employers and businesses on Vancouver’s West Side, where many currently struggle to attract employees due to the lack of affordable housing.”

Rents for the 58 homes will range from $950 per month for a studio to $2,000 for a three-bedroom. Caps will be imposed on rental increases when a tenant moves out and another person moves in.

The project falls under the city’s Moderate Income Rental Housing Pilot Program, commonly referred to as MIRP by staff and politicians. The program is designed to provide homes for households who are not eligible for or do not want to live in social housing, but cannot afford a market rental home.

All homes will be pet-friendly.

MIRP is considered a pilot program because it aims to test the level of interest from developers and “demonstrate financial and operational feasibility of these projects in different parts of the city, including the level of affordability that can be achieved,” according to a city staff report.

In its most basic form, the program swaps increased density for affordable housing.

So far, council has approved eight projects under the program, totalling 859 rental units, 174 of which are geared to moderate incomes. Two rezoning applications are in process, with nine more in the pre-application stage.

The building, at 282 feet tall, will be built on a former Denny’s Restaurant site in a neighbourhood that will see more change and development as the Broadway Subway project proceeds and the city’s Broadway plan is finalized.

The property is located within a 10-minute walk of the Vancouver General Hospital campus and between two future underground SkyTrain stations at Granville and Laurel streets.

Jameson took advantage of the new program to amend its proposal and add height and more homes, including 58 geared to moderate incomes.

Elliott told council the clinic has 18 employees but is finding it increasingly difficult to attract and retain talented administrative and support staff because they can’t afford to live in the area.

“We’re not the only ones experiencing this crisis,” he said.

“In my work as physician, I hear it time and time again. I’m concerned about the quality of care that Vancouver residents will receive if we don’t address the matter now. We need better housing for work force employees and I believe projects like these are long overdue.”

Resident Carole Krause urged council in a letter to reject the proposal, saying she and her husband have lived in Fairview since 1985 and witnessed “the desecration of Vancouver’s beautiful setting that no longer exists because previous mayors and councils have allowed an excess of unattractive highrise towers to be built in the downtown core.”

“The mountains, our most beautiful asset, have virtually disappeared behind a wall of vertical sprawl,” Krause said.

“The proposed 28-storey building on the tiny site at Broadway and Birch represents the same kind of vertical sprawl and radical density increase. If approved, this will be the beginning of the end of our very livable Fairview neighbourhood where the average height of tall buildings is 11 storeys.”

City planner Dan Garrison told council Tuesday that staff wasn’t in a position to say whether the value of the land in the neighbourhood would increase because of the project. Garrison said many factors would have to be considered to make an accurate prediction.

“We’re not seeing that this specific project will create land value increases,” he said, noting the city’s ongoing policy development for the Broadway corridor considers affordability.

“But in terms of the broader neighbourhood and the broader planning perspective, those are difficult questions to assess.”

Prior to council’s vote, Coun. Melissa De Genova — who also supported the project — asked staff whether the new building could be considered “iconic” in shaping the city’s ongoing Broadway plan, which will see more development along the corridor.

Planner Paul Cheng said the question was subjective and really is up to each person to decide, although pointed to the Marine Building in downtown as a building the “entire citizenry” could agree was iconic.

“Sometimes certain buildings definitely reach the point of iconicness for all people such as the marine building. It will be up to the citizens in the future to decide if this is going to be iconic, or not. Not until it’s built and people start to really look at it will they start to have an idea if it is.”