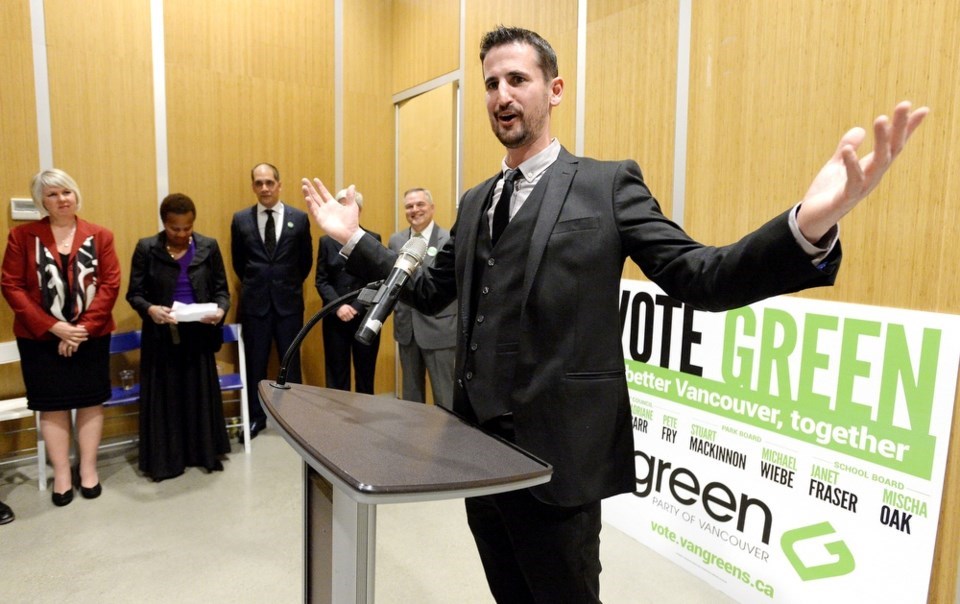 The case against the Green Party councillor was scheduled to last two days when it began in February but required a third day Tuesday.

It is now expected to wrap up Thursday with final arguments before B.C. Supreme Court Justice John Steeves, who will likely reserve decision until a later date.

Wiebe, who is being represented by lawyer Aurora Faulkner-Killam, has not addressed the court over three days of proceedings and is not expected to before the case closes.

He continues to be present via the Microsoft Teams meeting platform, which is being used for purposes related to COVID-19 and the fact the case is being heard in a Victoria courtroom.

Faulkner-Killam spent Tuesday using a combination of case law and sections of the Vancouver Charter to argue that Wiebe was not in conflict when he voted with council in May 2020 to approve a temporary patio program for restaurants, bars and breweries.

Wiebe owns Eight ½ restaurant in Mount Pleasant and is an investor in Portside Pub in Gastown. Both businesses were awarded permits, with Eight ½ among the first 14 successful applicants.

“The reasonably informed person would be aware that this was a pandemic response — this was effectively an economic emergency measure,” said Faulkner-Killam, noting the patio program benefited Wiebe’s competitors. “There is no evidence before the court capable of supporting a finding of bad faith.”

Faulkner-Killam argued Wiebe’s business interests were not a secret and that such information was easily accessed via the city’s website, where councillors’ financial disclosures are listed.

Wiebe is in court because resident Michael Redmond complained in June 2020 to Mayor Kennedy Stewart’s office that he believed Wiebe’s vote on the patio program constituted a conflict of interest.

The mayor ordered lawyer Raymond Young to conduct an investigation and submit a report. Young concluded that Wiebe “is disqualified from holding office until the next election” in October 2022.

He also said “it would be appropriate for councillor Wiebe to resign his seat on council.” Additionally, Young said if Wiebe chose not to resign, that court action could be initiated by citizens, or the city itself.

Redmond is among 15 petitioners to the court who want Wiebe removed from council. Some of the petitioners have ties to the NPA civic party, including Redmond and NPA president David Mawhinney.

Lawyer Wes Mussio, acting on behalf of the petitioners, became an NPA board member after the court action was launched. He and others have previously told Glacier Media that the case is not politically driven; in court Tuesday, Faulkner-Killam said the political ties could not be ignored.

Mussio, who did not address the court Tuesday, argued during the first two days of proceedings that Wiebe had a direct pecuniary interest in his vote, and that hundreds — not thousands — of businesses benefited from the patios.

“We’re talking about a program that helped out 334 businesses — we’re not talking about a city-wide program,” he said at the time, arguing Wiebe’s vote was not in the common interest of the city’s estimated 450,000 electors.

The judge ruled on the first day of proceedings that Young’s report was not admissible, which Mussio argued would “make it more difficult for the court to determine what the true facts are behind the case.”

The hearing continues Thursday at 10 a.m.