This Vancouver dashcam footage shows a near miss at an intersection on a bright, sunny day where the driver had to stop as a pedestrian ran into the street.
Jun 10, 2019 2:10 PM By: Elana Shepert 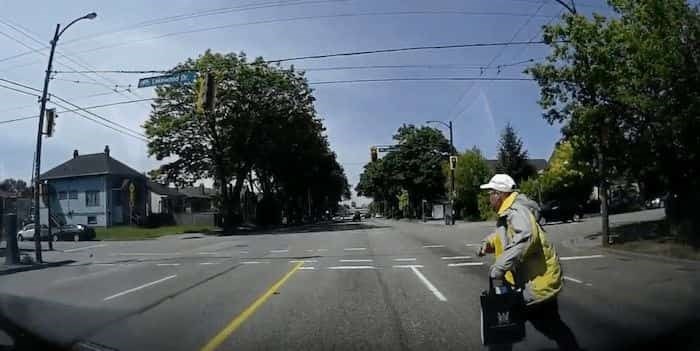 Pedestrian deaths are on the rise in the Lower Mainland, but it isn't always obvious who is at fault in collisions. However, having dashcam footage of an incident prevents any confusion as to exactly what took place.

Reddit user cvr24 shared a video on Saturday, June 8 that shows a close call on dashcam footage at a Vancouver intersection.

"I decided to post this video in light of the recent pedestrian deaths in Metro Vancouver. I was driving. When the light turned yellow, I let off the gas, and started to brake, noticed this guy step off the curb and figure he was going to make a beeline for the crosswalk," he describes.

"Instead he changed direction and started moving right towards me. Maybe he thought I was going to ignore the amber light and he was planning on running behind me. So I then slammed on the brakes."

Following his description of the incident, the driver notes that it was a nice, sunny day with perfect visibility. As a result, he was able to see the pedestrian clearly - but he underscores that things could've ended badly had the weather been less favourable. He also adds that everyone has a part to play in road safety - including drivers, pedestrians, and cyclists. Further, he states that, "safety is not a part time job."

"I'm not here to assign blame, as some media outlets have quickly turned to finger any flavour of a group of road users. I am a motorist, cyclist, and pedestrian," he explains.

"If you don't have a dashcam, get one, and test it regularly, because without it if you hit a pedestrian, you are screwed for life."