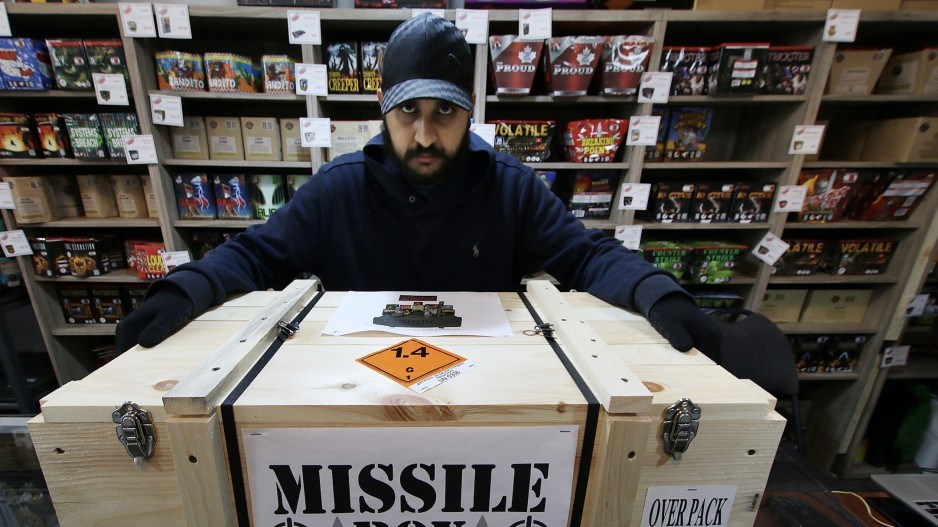 Fireworks sellers have opened pop-up stores in Vancouver for the final time, thanks to the city banning the sale of the festive pyrotechnic items starting November 1.

Phatboy Fireworks opened 13 stores in Vancouver on March 25, and principal Parm Cheema told BIV that his stores will be in business until 6 p.m. on October 31.

While a trickle of in-store sales has taken place, the rush really takes place on Halloween, and in the two days before that date, he said.

“This year, we’re expecting to see a huge boom in sales because it’s the last year for sales in Vancouver,” he said.

Banning sales for fireworks in bricks-and-mortar stores will not curb sales in Vancouver, as residents will be able to simply go online to buy what they want, said Cheema, who also sells fireworks online. Indigenous reserves are also places where people may buy fireworks as they are exempt from city bylaws.

Natural Resources Canada’s explosives regulatory division determines which fireworks are eligible to be legally sold in Canada, and it has banned the sale of some kinds of fireworks, such as cherry bombs and firecrackers, for being too dangerous.

“They’re the number one demand item,” Cheema said of cherry bombs. “People want those things so there’s a huge market for it.”

He said some of his online competitors sell cherry bombs, firecrackers and other illegal fireworks, and that the City of Vancouver’s outright ban on all physical-store sales could backfire, as Vancouverites will go online and buy illegal and more dangerous fireworks than they would have purchased had they gone to a physical store.

“You see people do more, and they set them off faster, so they are not doing it safely,” he said. “They don’t do the proper set-up. They quickly go outside, light the fireworks. They may throw them in the garbage, not noticing that they are still hot, and that’s what causes house fires. Illegal fireworks cause injuries, like a lot of injuries, where people’s fingers are blown off.”

Vancouver city councillor Pete Fry successfully introduced a 2019 motion to ban fireworks, and then council confirmed that vote earlier this year, following a staff report. He believes that the ban on buying and setting off fireworks in Vancouver will reduce the number of fireworks set off during future Halloweens.

He opposes allowing fireworks not only because they can cause injuries and fires but also because they scare animals and some people.

One woman told council that her autistic son pulls his hair out when fireworks ignite because of the loud sounds.

Fry said it has been too easy to get a permit to set off fireworks in the city.