Faiyaz Dean of Surrey has made a career of creating shell companies for trading on junior exchanges.
Feb 4, 2020 4:10 PM By: Graeme Wood 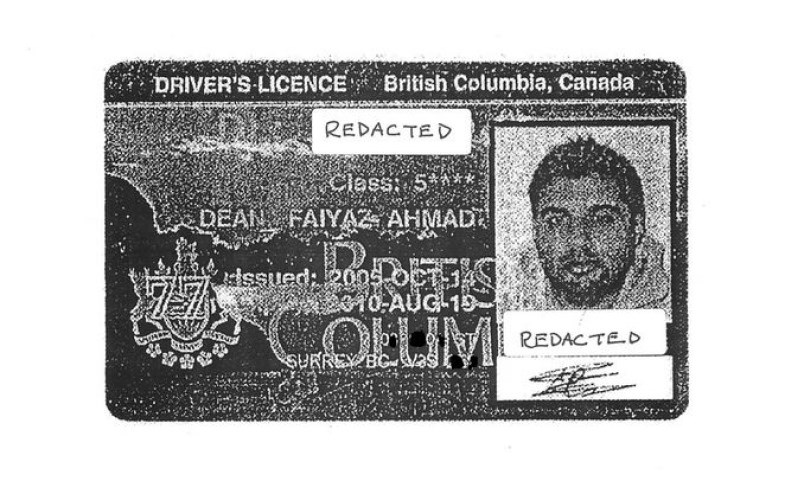 Faiyaz Dean’s B.C. driver’s license as it appears in a 2018 US SEC affidavit

U.S. authorities are still gathering evidence in a court case involving Vancouver securities lawyer Faiyaz Dean, who remains in Canada but faces criminal charges in Arizona in relation to a $34 million pump and dump scheme.

The Surrey resident recently agreed to stop practicing law in B.C. while the Law Society of B.C. conducts its own investigation — the lesser of his worries.

Dean remains free to practice law in Washington State, where he attended law school and remains an active member of the Washington State Bar Association; however, this would require entering the United States. Dean has yet to be extradited nor is he on bail, according to his custody status with the U.S. District Court, which remains blank.

U.S. Department of Justice spokesperson Nicole Navas Oxman told Glacier Media last month it “generally does not comment on extradition-related matters until a defendant is in the United States.”

Despite the criminal indictment being issued against Dean last April, Surrey lawyer Aman Singh, who has worked on extradition cases in Canada, told Glacier Media the process can appear slow, especially if evidence is still being collected.

That said, in a case such as Dean’s, Singh would expect extradition to occur at some point before the trial, or for Dean to volunteer himself at the border.

“Extradition [to the U.S.] is a low bar. The bar is there if there is a case for trial,” said Singh, who expects Canadian police are aware of the case and of Dean’s whereabouts.

The Southern District of New York court already made a civil ruling against Dean in late November, determining he violated securities laws in relation to the pump-and-dump scheme. The court expelled him from penny stock trading and fined him $160,000. Dean didn’t attend his own trial and the court made a default judgment.

That judgment stems from a May 15, 2018 filing with the court in which the U.S. Securities and Exchange Commission alleged Dean and others “engaged in a fraudulent scheme to effect illegal, unregistered sales of and manipulate the market for shares of the micro-cap company Biozoom, Inc.”

The SEC determined the 2013 pump and dump generated $34 million in illicit profits by selling stock to retail investors at inflated prices. The SEC reported in 2018 it was able to locate $16 million in U.S. accounts and return it to harmed investors.

The SEC claim stated how Dean provided the necessary legal framework for the scheme as he helped conceal the beneficial ownership of stock held by the so-called “masterminds” of the scheme, Francisco Abellan Villena and Guillermo Ciupiak. Dean also helped create bank and brokerage accounts in the names of Argentinian nominees that were used to sell Biozoom shares. Accounts were located in Belize, Cyprus, St.Vincent and the British Virgin Islands. Central to the scheme was how Dean set up a shell company with 59.7 million shares that later became Biozoom.

The SEC case mirrors that of the criminal indictment against Dean and Abellan, as well as James Panther Jr., who is alleged to have “exercised influence and/or control over corporate entities used in furtherance of the scheme.”

On February 3, U.S. prosecutors filed paperwork to the court to produce more evidence in the case. The proposed evidence is directed against Panther, but names Dean. Prosecutors intend to allege Panther, and his co-conspirators, were part of a second fraud scheme similar to the one for which they face charges.

The trio of defendants “alongside other co-conspirators and individuals, orchestrated a market manipulation fraud scheme involving some of the same nominee shareholders used in the Biozoom scheme in an effort to move OCEL (Ocean Electric Inc.) from the over-the-counter market to the NASDAQ for trading. “Shares were then transferred to nominee shareholders who deposited or attempted to deposit shares into brokerage houses for market trading. As in the Biozoom scheme, the OCEL shares were in fact controlled by the co-conspirators and other individuals,” the filing states.

In providing such evidence, prosecutors intend to “show the defendant’s [Panther] motive, intent, opportunity, preparation, plan, knowledge, absence of mistake or lack of accident in the commission of the charged conduct.”

Prosecutors are doing this as “the defendant may contend that he believed he had taken part in a legitimate operation and did not realize that he and his co-conspirators were in fact operating an illegal market manipulation fraud scheme. “His involvement in a parallel scheme involving these same individuals will evince his knowledge that he was engaging in criminal activity,” the filing states.

Dean graduated from Seattle University School of Law in 2003. In 2009, he was the subject of a series of Vancouver Sun articles by now-retired columnist David Baines, who foretold the numerous Russian- and Ukrainian-run shell companies Dean was setting up were “perfect vehicles for future ‘pump and dump’ stock schemes.” Prior to being called to the bar in February 2009, Dean articled as a lawyer with Vancouver’s Bacchus Law Group, founded by Vancouver stock promoter and lawyer Penny Green (now Penny White).

Dean went on to set up his own firm, Dean Law Corp., in Seattle and Vancouver, where he purports to specialize in setting up IPOs and reverse mergers for junior start-up companies.

Dean’s Vancouver law practice was initially only partially restricted in a Dec. 2, 2019 agreement between the law society and Dean.

Some time between Dec.19 and Jan.1, after Glacier Media made inquiries, Dean agreed to stop practicing law entirely via an undertaking with the society, said spokesperson David Jordan. His status was updated Jan. 1 on the society’s website.