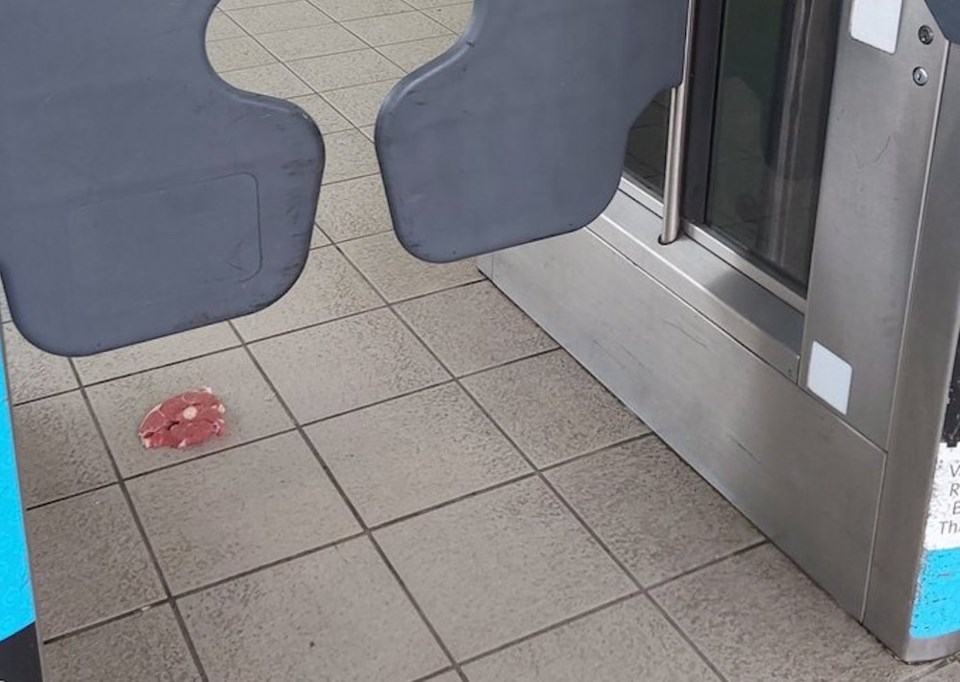 Earlier this month, Metro Vancouver Transit Police took to Twitter to share an image of raw steak laying at a fare gate at the Broadway-Commercial SkyTrain Station. Photo via @TP_Enforcement / Twitter

Have you ever spotted misplaced meat at a Metro Vancouver SkyTrain Station?

The story may involve more than 'meats' the 'rib-eye.'

Earlier this month, Metro Vancouver Transit Police took to Twitter to share an image of a raw steak lying at a fare gate at the Broadway-Commercial SkyTrain Station.

People wondered whether the enforcement team had a bone to pick with a lawbreaker or if someone accidentally butchered their dinner plans by dropping the meat in transit.

"Something very 'rare' caught their attention, a raw steak lying on the ground beneath the fare gate," explains Yake.

"As the officers made their way to the platform, they came to 'meat' a man who was not wearing a mask or face covering. They stopped the man to issue him a violation ticket for failing to wear a face covering in an indoor public place."

During their interaction, the officers learned that the man was wanted on five outstanding warrants for the offences of theft, break and enter, possession of break-in instruments and trespass at night.

"Before the officers placed the man under arrest, they noticed that he kept trying to put his hands down the front of his pants. It became evident why  -- as they placed the man in handcuffs, a packaged steak fell out of a hole in the man's jogging pants and onto the platform."

Although additional charges of theft have not been recommended, Yake notes that it is not uncommon for Metro Vancouver Transit Police officers to come across individuals concealing meat products following recent theft reports.

"Not wearing a face covering was a 'missed steak' for a man who had so much at 'steak' when stopped by police," he adds.

The man was issued a $230 violation ticket for failing to wear a face covering in an indoor public place and transported to jail for the outstanding warrants.