Kennedy Stewart: ‘This is a personal decision by the premier to do this.’

Mayor Kennedy Stewart says he was “gobsmacked” to learn Premier John Horgan’s government didn’t make good on a promise to provide up to $60 million to help cover revenue losses related to the pandemic.

Instead, Stewart announced at Wednesday’s council meeting, the city will receive $16.3 million, despite the city facing revenue losses of up to $88 million this year and $60 million next year related to COVID-19.

“So I am communicating my great displeasure with the provincial government today, and I’m really pretty gobsmacked about getting shafted over this,” he said, noting Burnaby and Surrey also received less money than anticipated. "We were expecting up to $60 million for Vancouver."

Stewart said when the pandemic was declared in March, he and other big city mayors stated their cases with federal cabinet ministers for emergency money to help offset operating budget losses.

In turn, the federal government announced $19 billion in investments under its “safe restart agreement.” The funding included money for health care, transit and $2 billion earmarked for cities.

That money flowed to provincial governments, which were then to distribute funds to cities based on a per capita basis — “it’s written right in the agreement,” said the mayor, noting he spoke to then-finance minister Carole James during the recent provincial election campaign “and it was acknowledged in those conversations that they’d be sticking by the federal agreement.”

Ballots are still being counted to determine final results of the Oct. 24 election, meaning Horgan is overseeing what Stewart described as a “caretaker government” until the writ period ends. James has since retired.

“This is a personal decision by the premier to do this, and basically the province decided to renege on the federal agreement and to not distribute the money as per agreed,” Stewart said. “This is to the detriment of B.C.’s biggest cities, including Vancouver, Surrey and Burnaby.”

The mayor’s office calculation is that the $16.3 million will provide roughly $25 per person in Vancouver, whereas a city one-tenth the size will receive $100 per person. 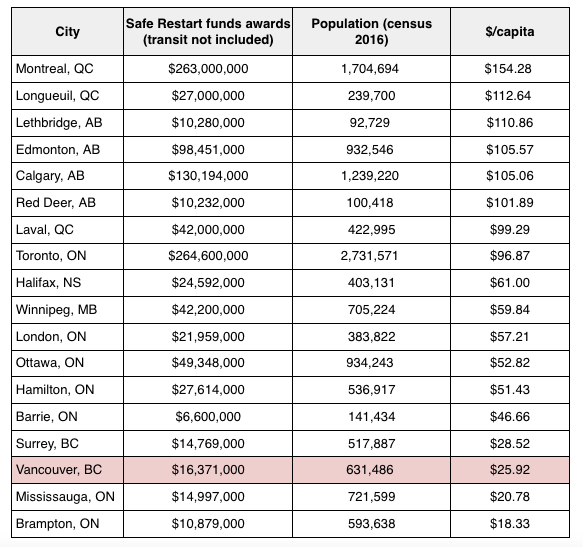 A table showing what Canadian cities received under the provincial-federal “safe restart funding.” Table courtesy of Vancouver mayor’s office
Stewart suggested that had it not been for the negotiations between the federal government and the Big City Mayors’ Caucus group associated with the Federation of Canadian Municipalities, no money would have been sent to provincial governments.

“We’re the cities having the most difficulty, we’re the municipalities that are having to shoulder the burden,” he said, noting Vancouver’s increasing homelessness, overdose drug deaths and struggling businesses.

“The intention of the federal funding was to help out cities in the most need. So that’s not what happened here today.”

The explanation for the shortfall in funding — $45 million, by the mayor’s calculation — is contained in a Nov. 2 letter from the Ministry of Municipal Affairs and Housing to city manager Sadhu Johnston.

In the letter, deputy minister Kaye Krishna said the amount of money for each municipality was based on a formula set by the minister of Municipal Affairs and Housing, who was Selina Robinson before the election was called and remains in that cabinet post.

“This is because small municipalities often lack a diverse tax base and the economies-of-scale to easily restart their operations.”

The mayor made the announcement about the $16.3 million during a council meeting, where members of the city’s finance team gave council an update on finances and property tax increase scenarios of five, 4.3 and three per cent for the 2021 operating budget.

Council won’t decide on a tax increase until next month.

Patrice Impey, the city’s chief financial officer, said the reduced sum of $16.3 million from the provincial government will mean the city will have to rely more on its reserves — upwards of $57 million — to balance the operating budget.

“That is a number [$16.3 million] that is far less than the total impact from the pandemic on the city, and less than what we would need to close the gap for 2020, even after all of our mitigation efforts,” said Impey, noting the rollout of funding from the provincial government favoured smaller municipalities.

What’s important to remember, Impey continued, is that major cities across Canada were hit very hard by the pandemic, “given that we have a much higher per cent of our revenue from non-utility sources.”

“So our parking revenues, our program revenues — they’re much more significant both in dollar value and per cent of budget than other cities,” she said, noting the B.C. government’s funding formula means a city with a population of 45,000 would receive more than $5 million.

Note: Since this story was first posted, Selina Robinson, Minister of Municipal Affairs and Housing, sent a statement to Glacier Media, which reads:

"Government is focused on helping communities of all sizes get through the pandemic and deliver the services that people are counting on right now. This support takes many forms, whether it's support for transit operating losses, resources to address homelessness, or changes to the provincial school tax remittance dates and other aspects to give local governments more flexibility.

The local government Safe Restart funding was designed to be fair, equitable and help communities, whether big or small, struggling the most through the pandemic. The funding formula provides more money to larger communities, but a higher per capita level of funding to smaller and mid-sized communities because we know that smaller municipalities generally do not have reserves to draw on like larger municipalities and many small communities, especially tourism dependent ones, have less diverse revenue bases that have been hit hard by COVID-19.

Our support for the City of Vancouver also includes $644 million to fully cover Translink's losses, so that Metro municipalities don’t have to cover those costs, and funding hundreds of temporary spaces and hotel purchases to support people experiencing homelessness in Vancouver. We look forward to continuing to partner with the City of Vancouver, including through the additional grant programs for municipalities available through our Recovery Plan. The pandemic has been challenging for all levels of government and we all have a part to play in helping get people and businesses through the pandemic."