Vancouver mayor in Ottawa to lobby for millions in transit funding

“Our message to the federal government is simple: the situation here, in Metro Vancouver, is urgent.”
Feb 4, 2020 3:22 PM By: Mike Howell 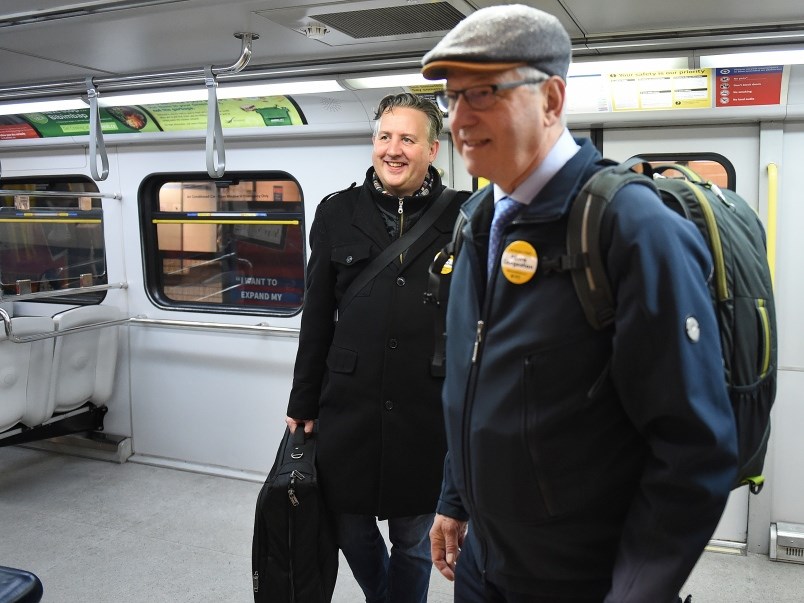 Mayor Kennedy Stewart renewed a request Tuesday by the region’s mayors to have the federal government agree to spend $375 million annually on a permanent Metro Vancouver-wide transit fund that would roll out in 2027.

Stewart was joined by Langley Mayor Jack Froese at a news conference at the Broadway Canada Line station to renew the request for a permanent fund that mayors pitched during last fall’s federal election campaign.

The two mayors spoke to reporters in advance of their trip Tuesday to Ottawa, where they will meet Wednesday with their federal counterparts to outline the region’s case for a permanent fund and request another $910 million in new transit investments.

“We have the fastest growing transit ridership [in Canada] – an astonishing 20 per cent in the last three years,” Stewart said.

“We can’t afford to slow down our transit expansion because ridership in the system is growing faster than we can keep up with,” he said.

“Our message to the federal government is simple: the situation here, in Metro Vancouver, is urgent.”

The mayors want the government of Prime Minister Justin Trudeau to introduce legislation by next year to establish a permanent transit fund, with money to roll out in 2027.

Such a fund would give certainty to TransLink to “bank” on future revenues and commit to future proposals such as an extension of the SkyTrain from Arbutus Street to the University of B.C.

Froese noted the Trudeau government has signaled that it supports a permanent fund, although the mayor acknowledged the seven-year lag before such a fund would kick in.

That’s why the mayors announced Tuesday that they want $685 million in “transition funding” by mid-2021 to help fund the third phase of the mayors’ regional transit plan.

That plan includes extending SkyTrain from Fleetwood in Surrey to Langley and a proposed gondola connecting rapid transit to the Simon Fraser University campus on Burnaby Mountain.

Another $225 million is requested to accelerate the conversion of TransLink’s bus fleet to emissions-free battery electric technology starting in 2021.

Though a SkyTrain extension to UBC isn’t included in the third phase of the plan, Stewart said he will continue to lobby for the link when in Ottawa this week.

“What we’re focusing on in this trip is the phase three funding,” he said, noting part of that funding would go towards creating a business case for a SkyTrain extension to UBC.

“But you can believe it, I will be pushing for the UBC SkyTrain while I’m there.”

The estimated cost of the extension to UBC is $4 billion, although a route and station locations, along with rising construction costs, could increase the final tab.

The provincial and federal governments have not committed to the extension, but previously agreed to fund the 5.7-kilometre portion of the Broadway subway from VCC-Clark Station to Arbutus Street.

Last week, Indigenous leaders from the Musqueam, Squamish and Tsleil-Waututh nations joined UBC president Santa Ono and Stewart at city hall to call for a SkyTrain extension to the university.