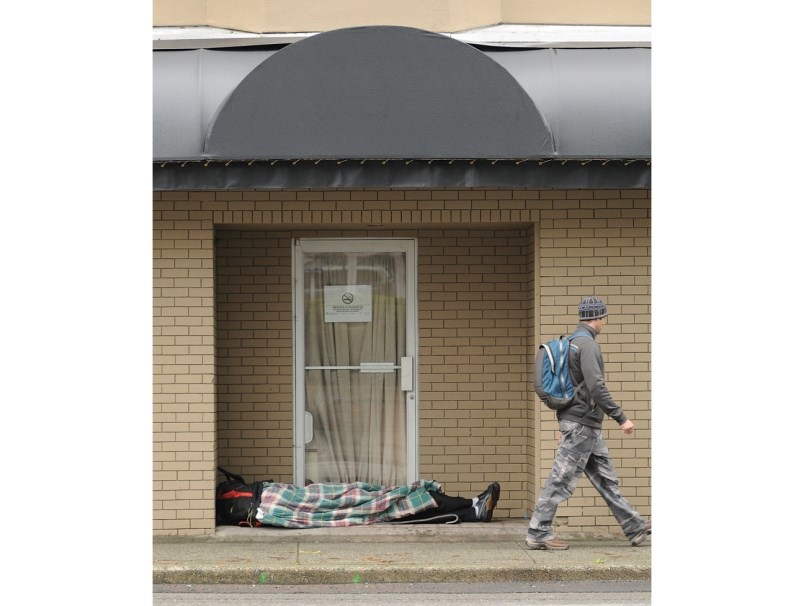 Mayor Kennedy Stewart announced Tuesday that he wants council to unlock $30 million to buy or lease buildings to create homes for people living on the street. File photo Dan Toulgoet

Mayor Kennedy Stewart wants council to unlock $30 million to buy or lease housing for homeless people and include services in the buildings such as health care and counselling in an effort to reduce the number of people living on the street.

Stewart announced his request Tuesday in advance of a meeting Thursday in which council will decide on what options are best and most achievable to bring some emergency relief to the estimated 750 people living in tents and in other places outside.

“The $30 million is a commitment to action,” Stewart told Glacier Media Tuesday by telephone. “That’s the challenge in front of council on Thursday: Are we going to move on this, or are we not?”

The mayor said the buy-lease option is the only viable one in a long list that includes setting up six separate sanctioned homeless camps, building tiny house villages and converting city buildings into shelter space.

Parkades, empty lots, the lawn at city hall and adjacent Helena Gutteridge plaza are potential sites, although city staff said that buying or leasing buildings is the more likely scenario for council to consider.

That’s because the city has a history of working with the provincial government and non-profit agencies in agreements that have led to the purchase or lease of former hotels. The federal government has not participated in such arrangements, but that could change.

As the mayor noted, and staff pointed out in the memo, the federal government recently announced a $1 billion initiative to cover the construction of modular housing, the purchase of land and conversion of existing buildings to affordable housing.

The $1 billion is in addition to $236.7 million to be further spent on the government’s homelessness strategy “to help extend and expand the emergency response to the COVID-19 outbreak,” according to a Sept. 21 news release from Ahmed Hussen, the federal minister responsible for Canada Mortgage and Housing Corporation.

Stewart said the application process will open this month for that money and that he and staff have identified a number of projects they want to see funded by the federal government. Until then, he said, having the city use $30 million to address homelessness is the best move council can take to get people off the street.

“I think that’s going to put a big dent in the problem,” the mayor said. “I don’t think it will end it, but I think it will put a large enough dent in it. But on the other side, we have to be cautious of our spending due to the other COVID complications with our finances.”

The city is facing a revenue shortfall of $124 million in its 2020 operating budget and $219 million in the 2019-2022 capital plan, mainly related to a decrease in development contributions and money from senior governments.

The mayor said it will be up to staff to decide where and how the $30 million can be unlocked., But Stewart noted the federal government has given millions of dollars to provincial governments to assist municipalities through the pandemic.

“Edmonton has now announced that they’ve received their money, which is $60 million I believe in operating funds and we’ll get a similar amount on a per capita basis,” he said. “It’s just that this has been slowed down through the [Oct. 24 B.C.] election.”

Stewart said he’s not sure what conditions the provincial government may or may not set for the federal money, but believes there is “a strong possibility” it could be used to address the city’s homelessness crisis.

Asked how soon he thinks the city could buy or lease a building — if council were to approve his request for $30 million — Stewart pointed to the provincial government’s effort in April to immediately secure hotels and other accommodation for people living in Oppenheimer Park’s tent city.

Some of those people, however, have since moved to Strathcona Park, where there is about 400 tents and 200 people living in the park, according to staff’s report. Street disorder has increased in Strathcona and in other parts of the city as a result of the increase in homelessness.

Stewart acknowledged that concern in his motion to council, saying residents are “demanding solutions in the form of services and housing options for their vulnerable neighbours.”

COPE Coun. Jean Swanson said in an email to Glacier Media Tuesday that she wants to see all 750 people living on the street moved indoors and have access to supports they need.

"If that takes $30 million, fine," Swanson said. "We can send a bill to the feds. If it takes $100 million, we can sell some property. This is an emergency: COVID, opioid, homelessness. If ever therre was justification for spending money, it's now. People will have longer, safer lives if they can go indoors, and all the studies say we save money in the long run. So I'm not being a spendthrift."

NPA Coun. Sarah Kirby-Yung said in an email that she was disappointed the mayor’s motion doesn’t “address the need to provide immediate relief for Strathcona residents as well those tenting in Strathcona Park, in order to tackle the real and escalating public safety and well-being issues that are impacting the community overall as well as those who are unhoused.”

OneCity Coun. Christine Boyle said she supported the city taking urgent action to house residents who have no choice but to sleep outside.

“And I support the city committing funds in order to take action quickly, while continuing to advocate loudly for the financial help we desperately need from senior levels of government in order to truly address homelessness,” Boyle said in an email. “We need council to give clear direction this week, and then we need to get to work on implementing plans. There’s no time to stall or delay on this.”

Council is scheduled to meet at 9:30 a.m. Thursday.