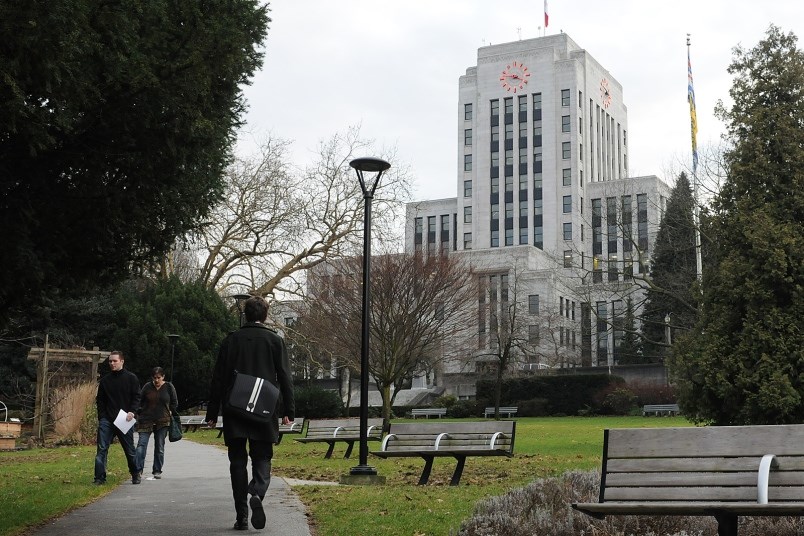 The lawn at city hall is a possible location for a sanctioned encampment or “tiny house” village for homeless people. File photo Dan Toulgoet
Setting up temporary homeless camps or “tiny house villages” on the lawn at city hall and the adjacent Helena Gutteridge public plaza are options Vancouver city council will consider this Thursday in its fight against homelessness.

The options are outlined in a 28-page memo from city staff but not ranked as the most likely of paths to take, with leasing or purchasing vacant hotels, apartment buildings or single-room-occupancy hotels seen as a more realistic and achievable approach.

Sandra Singh, the city’s general manager of arts, culture and community services, said in her memo that funding from the provincial and federal governments is more likely to occur in a scenario that involves the purchase or lease of buildings.

“It would be extremely challenging and not sustainable for the city to take any of these options on alone given the limited capital and operating funding the city could deploy without displacing permanent housing investments already contemplated in the capital plan, service reductions across the city, or the need for significant tax increases significantly,” Singh said.

“Implementation of any option should be considered as contingent on a commitment from senior governments to contribute both capital and ongoing operational funding.”

In addition, governments have not previously shown support for managed encampments or tiny house villages, she said, adding that funding from senior governments for a designated spot for people living in recreational vehicles is also unlikely.

Singh’s memo was in response to a council directive last month to have staff consider the feasibility of a whole host of options to reduce homelessness in Vancouver, particularly at the growing encampment in Strathcona Park, where roughly 200 people live in tents.

Council wants to see staff immediately implement options to get people off the street.

The urgent call is being driven by the COVID-19 pandemic and resulting physical distancing measures that limit the number of people in shelters, ban guests from single-room-occupancy hotels and the connection to unprecedented monthly overdose death totals.

The memo confirms what Mayor Kennedy Stewart, COPE Coun. Jean Swanson and housing advocates have told Glacier Media in recent months — that the number of people living outside is a lot higher than the homeless count numbers recorded in March.

The new “conservative” estimate is that 750 are living outside, which is about 200 more than recorded in the homeless count. That number is in addition to 1,548 counted in some form of shelter, for a total of 2,300 people without a home.

Homelessness coupled with drug activity has led to increased street disorder downtown and in Strathcona, where residents recently held a demonstration and continue to implore politicians to respond to their concerns.

Staff consulted with leaders of the Strathcona encampment, who stated a preference for up to six sanctioned encampments instead of one large tent city.

Further consultation with 83 people sleeping on the street found that 62 of them “had concerns regarding personal safety and security when considering staying in a managed encampment.”

In considering city-owned sites, staff created a list of potential properties, including the lawn at city hall and the Helena Gutteridge plaza, both of which have space to accommodate two 25 to 40-person encampments on each piece of land.

A parkade in Chinatown, another on Cordova Street and city lots at 800 Quebec St. and 1500 Main St. were also on the list of city properties for council to consider in their deliberations Thursday.

The memo notes sanctioned camps exist in Seattle, San Francisco and Victoria but concluded they “rarely end up being a temporary measure, often resulting in low rates of occupants being housed, delayed closures and high operating costs, all the while street homelessness continues to grow.”

As for the tiny homes option, staff said it would require “a longer-term process, including thoughtful planning and consultation and considerable research” for it to proceed.

Staff also suggested a sleeping pod with heat, power, a private bathroom and microwave be considered minimum standard if built in Vancouver.

The lawn at city hall, the Helena Gutteridge plaza and parkades in Chinatown and on Cordova Street were also listed as potential locations for tiny houses, with proponents modeling options for up to 10 “sleeping pods” able to fit on a typical 33 by 122 sq. foot single-family housing lot.

For bigger lots, the city said temporary modular housing — of which there are more than 600 units across the city — presents “the highest, most economical and best use of limited land available for temporary housing options.”

Staff scanned all available city sites that could be renovated to be suitable for emergency housing or shelter and say options are limited, but do list the Kingsway Continental Pub and iconic 2400 Court Motel on Kingsway.

Costs for all options outlined in Singh’s memo vary widely and are preliminary, with the purchase of 290 units in hotels and apartment buildings estimated at $125 million to $204 million.

A “sprung shelter” — essentially large tents similar to what is seen on movie sets — could cost $100,000 to $4 million, according to the memo.

Each tiny home could cost between $80,000 to $120,000, with further cost analysis needed. Costs for policing and firefighters for each option also has to be considered.

The options come as the federal government recently announced a $1 billion initiative to cover the construction of modular housing, the purchase of land and conversion of existing buildings to affordable housing.

The $1 billion is in addition to $236.7 million to be further spent on the government’s homelessness strategy “to help extend and expand the emergency response to the COVID-19 outbreak,” according to a Sept. 21 news release from Ahmed Hussen, the federal minister responsible for Canada Mortgage and Housing Corporation.

That funding is cited in Singh’s memo, with the mayor telling Glacier Media two weeks ago that his office and senior staff have put a list of projects together to apply for some of that funding; the city has yet to make public the projects, or amount of funding requested.

The provincial government, meanwhile, recently announced 98 units of modular housing and another 350 units of permanent supportive housing in Vancouver. That’s on top of three Vancouver hotels the government purchased this year for additional housing.

Since the pandemic was declared in March, the provincial government, B.C. Housing, the City of Vancouver, Vancouver Coastal Health and non-profit agencies have secured almost 700 spaces in Vancouver for temporary accommodation.

“However, these welcome and appreciated investments alone cannot make up for years of insufficient funding, and further funding and service innovation are required,” said Singh in her memo, who also pointed out the provincial election campaign is underway.

“At this juncture, it is also important to note that provincial government staff are not able to indicate any position on matters arising during the election period.”

The election isn’t until Oct. 24, with final results not expected on that day because of an anticipated influx of mail-in ballots that need to be counted.

This Thursday’s council meeting is scheduled to begin at 9:30 a.m.