Green Party Coun. Michael Wiebe under fire for his votes on temporary patio program
Sep 21, 2020 11:50 AM By: Mike Howell 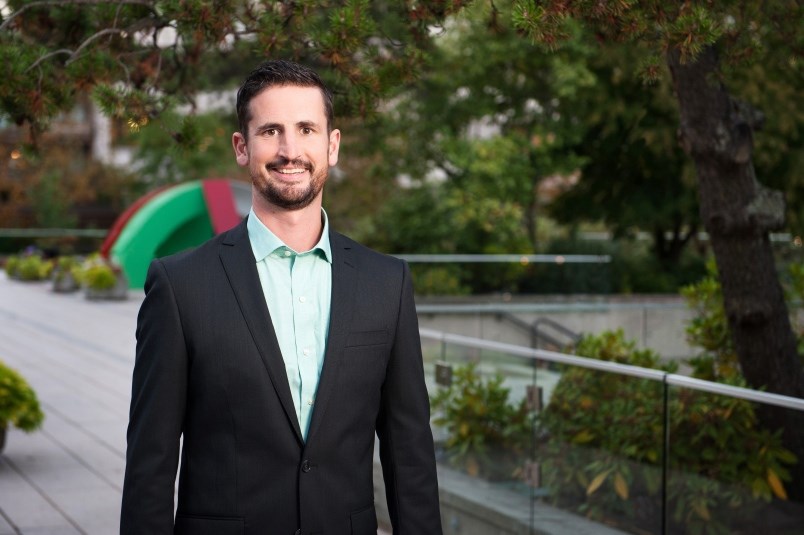 Green Party Coun. Michael Wiebe says he acted in “good faith” when he voted for the city’s temporary patio program. Photo submitted
The president of the Vancouver Non-Partisan Association, whose members hold the most seats on city council, issued a statement Monday calling for Green Party Coun. Michael Wiebe to resign for voting in favour of a temporary patio program that saw his restaurant be approved for a patio, as well as a pub in which he is an investor.

David Mawhinney was reacting to news that broke Sunday that an independent investigator, Raymond Young, concluded Wiebe should resign or no longer be allowed to hold office until the next election in October 2022.

The allegations against Wiebe were that he participated in council votes in May that allowed businesses to apply for temporary patio licences. Both Wiebe’s Eight ½ restaurant in Mount Pleasant and the Portside Pub in Gastown received licences.

“Because of these findings [in the report] and councillor Wiebe’s failure to uphold the basic duty as an elected official, the NPA is calling on Michael Wiebe to do the right thing and resign before forcing his council colleagues to vote on his removal, or have 10 or more electors in Vancouver apply for a court order forcing his resignation,” Mawhinney said.

As Glacier Media reported Sunday, Wiebe said he was acting in good faith when he voted for the temporary patio program, which was an effort by the city to allow restaurants, pubs and breweries to keep their businesses open during the pandemic.

Wiebe, whose business interests are noted in his financial disclosure statement posted on the City of Vancouver’s website, issued a statement Monday and provided more insight into his vote for the temporary patio program.

He said in advance of the votes, he sought advice from city management. Wiebe said it was his understanding the patio program would be city-wide and benefit restaurants, breweries and common public spaces.

“I was also informed that it is up to me to determine whether I can participate with an open mind in the votes,” he said. “Based on this information, I decided to vote on the temporary patio policy with the good faith belief that I did not have a conflict and that I made appropriate inquiries.”

Currently, there are more than 300 restaurants, breweries and cafes across the city that have patios extensions because of the program, he said, noting he has since recused himself from voting on patio extension fees and permanent patio and liquor extension policies.

He concluded his statement saying that “if I inadvertently made an error in this matter, I am deeply sorry.”

An investigation was launched into Wiebe’s conduct after a citizen named Michael Redmond registered a complaint. Under the city’s Code of Conduct policy, it us up to the sitting mayor — in this case, Kennedy Stewart — to appoint a third party to investigate the allegations.

Wiebe told Glacier Media Sunday that both he and Redmond agreed to have Young, a veteran of municipal law, investigate. The report, however, was not released by the mayor’s office, but leaked to the Georgia Straight, which first reported the findings Sunday.

Stewart issued a statement Monday explaining that Young’s report provides recommendations for his review of the matter.

“On my review of the report, I can take further action depending on the contents of the report, including making recommendations to council,” Stewart said.

“Regarding the investigation into a Code of Conduct complaint against councillor Wiebe: I received the investigator’s report on Saturday, September 19, am reviewing it to determine my next steps, and cannot comment further to maintain the integrity of the process.”

The Green Party holds three seats on the 11-member council, second only to the NPA with four. OneCity and COPE are the other parties represented on council. Both Stewart and Bligh, a former NPA member until she resigned from the party last year, are independents.