NPA commissioner John Coupar brought forward the emergency motion after it was announced last week that Cypress Hill will headline this year’s event. 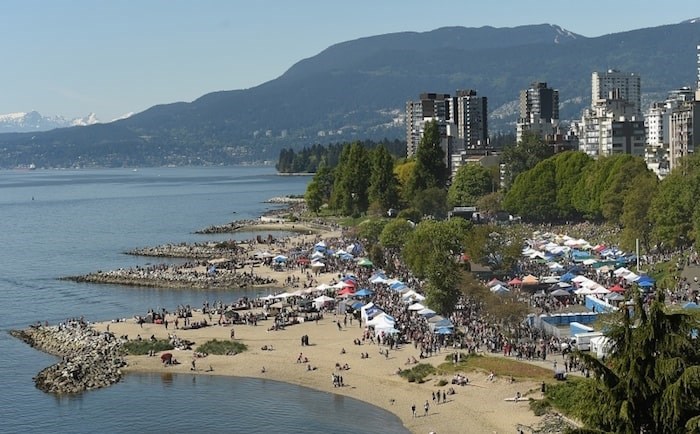 “It’s just my way of saying I think this has gotten out of hand, 4/20 has gotten too large and it’s the responsibility of the park board to step up and say, look, we don’t want to facilitate this,” Coupar told reporters outside the meeting. “We don’t want to help them set up and we want to make sure it’s safe.”

Coupar said he is concerned that the band’s presence will draw even larger crowds to Sunset Beach this year.

This Saturday marks the 25th anniversary of Vancouver’s 4/20 and the fourth year the event has been held at Sunset Beach.

The annual “smoke out” has been taking place in Vancouver since 1995. Initially it was held at Victory Square but Vancouver Art Gallery was home to 4/20 from 1997 until 2016. As the event grew in popularity it outgrew the space and a decision was made in early 2016 to move 4/20 to Sunset Beach.

However, the park board commissioners at the time were not on board with the move. The board sent a letter to former mayor Gregor Robertson outlining “grave concerns.”

The event takes place every year without a permit. Organizers applied for a permit in 2017, however commissioners adopted a resolution to not approve or permit any future 4/20 and/or cannabis events on any park board property, despite staff recommending that commissioners issue a permit for the annual event.

“We have a no smoking bylaw, we’ve been clear that it’s not the appropriate location and it’s time to actually show some leadership,” Coupar said.

Earlier this year, the park board voted to ask organizers and city council to find a “more appropriate location” for the event starting in 2020.

The PNE was previously considered as a possible location, however last month the PNE board of directors passed a motion to send a letter to city council stating that “Hastings Park will not serve as a relocation site for the 4/20 protest activities” and further that the board “remains committed to only hosting controlled events that fulfill the strict PNE event criteria and the City of Vancouver bylaws.”