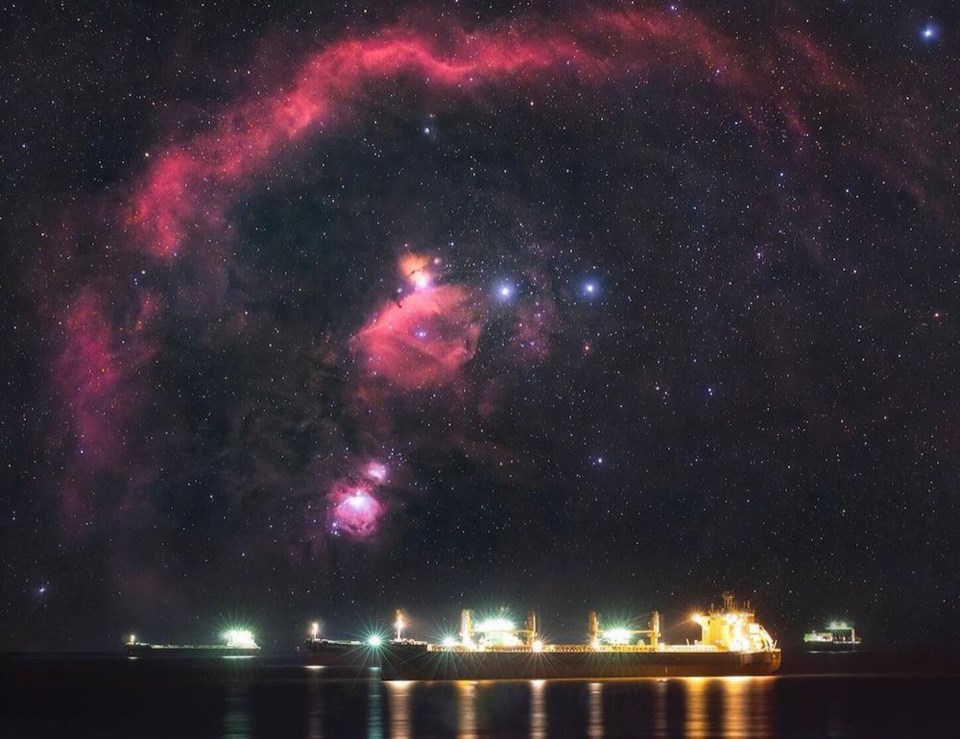 A Vancouver astrophotographer is sharing a stunning deep space image he captured of a huge star-forming area this month. Photo via @liron_gertsman_photography / Instagram

A Vancouver astrophotographer is sharing a stunning "deepscape" image he captured of a huge star-forming area this month.

Liron Gertsman, a 20-year-old astrophotographer and astronomy enthusiast, told Vancouver Is Awesome in a phone interview that the pandemic provides the ideal opportunity to stargaze.

The photo of the Orion Molecular Cloud Cloud Complex is the second deepscape image Gertsman has shared; his last one was a remarkable image of two nebulae glowing vibrantly above The Lions--known as the Two Sisters or Ch'ich'iyúy Elxwíkn, in the Squamish language.

"In contrast to my last 'deepscape' this was a fairly spontaneous endeavour," writes Gertsman in an Instagram post.

"I had been itching for a while to photograph Orion, before it disappears for another season. However, the weather forecast hadn’t called for a clear, moonless night in months. So, when a last-minute forecast on March 15 predicted clear skies, I scoured online maps in the two hours remaining before dark, searching for an interesting spot to photograph Orion."

Gertsman decided that Stanley Park would be the ideal place to take the picture, but there was a problem. "Stanley Park is located right next to downtown Vancouver, a heavily light polluted area (Bortle 8)."

To pull off the shot, Gerstman writes that he used "long exposures, optical filters, and stacking." He used a 100mm lens on a modified Canon 6D, "which records wavelengths near-invisible to a normal camera, along with a star tracker, to take very long exposures."

After an hour of visible light images, then an additional hour of “narrowband” images, Gertsman selectively targeted the "656nm wavelength emitted by nebulae (which cuts out light pollution). Finally, I switched off my tracker, to capture the foreground scene with which the stars were aligned. I combined, stacked, and stretched the images in post-processing, to reveal details of the night sky invisible to the naked eye."

While the night sky is filled with countless stars, galaxies, and nebulae that aren't visible to the naked eye, Gertsman says astrphography can "reveal what the eye cannot."

'Once-in-a-lifetime' photo of rare comet and Northern Lights in B.C.

In July 2020, Gertsman shared another remarkable image of a rare comet and Aurora Borealis at Harrison Lake.

Back then, Gertsman told V.I.A. that he had never had the opportunity to shoot a comet before. The last comet visible from the northern hemisphere that was comparable to Neowise was Comet Hale–Bopp in 1997, which was before he was born.