"I was treated to what might be a once in a lifetime event; the Aurora Borealis (Northern Lights) showed up, “photobombing” my comet shot."

A local astrophotographer is sharing a remarkable image of a rare comet and Aurora Borealis at Harrison Lake.

Liron Gertsman, a 19-year-old astrophotographer and astronomy enthusiast, tells Vancouver Is Awesome in an email that he's never had the opportunity to shoot a comet before. The last comet visible from the northern hemisphere that was comparable to Neowise was Comet Hale–Bopp in 1997, which was before he was born.

"I’ve spent all recent nights with clear skies observing and photographing this impressive spectacle," writes Gertsman. "On the night of July 13, while photographing at Harrison Lake (a short distance from Vancouver), I was treated to what might be a once in a lifetime event; the Aurora Borealis (Northern Lights) showed up, “photobombing” my comet shot."

Gertmas notes that the Aurora was visible to the naked eye for approximately 30 mintues, which is a very rare event at this latitude of just 49 degrees north.

"The colours were hard to see, but the pillars were clearly visible dancing across the northern sky."

The previous night, Gerstman also photographed the comet from over English Bay, resulting in a very "Vancouver" landscape image featuring the comet. 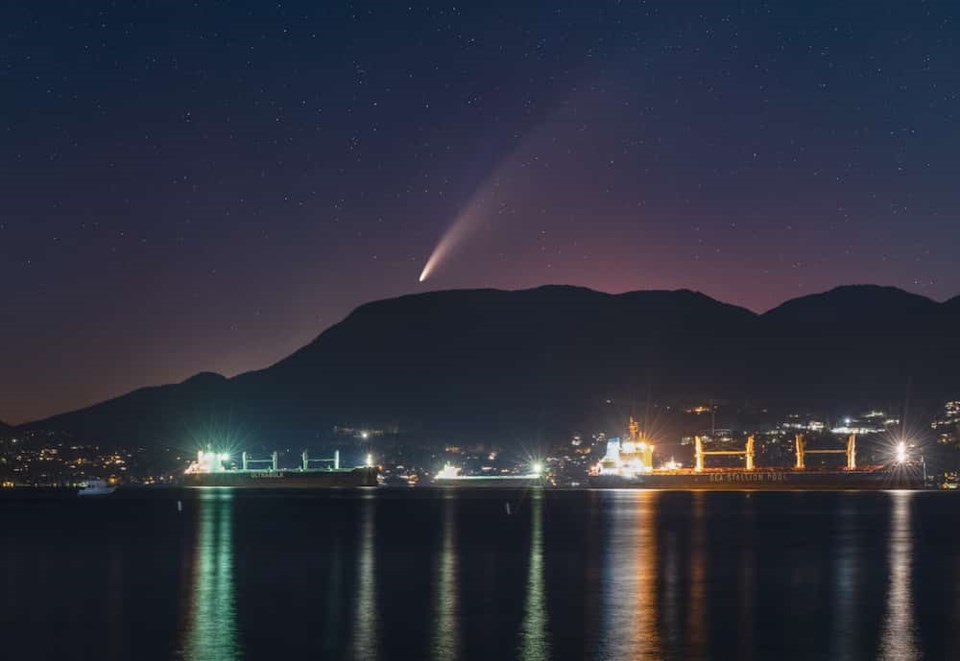 For the best views, Gertsman recommends that stargazers make sure it’s dark enough outside and that they have a clear view of the northern horizon. There shouldn't be any bright lights in the immediate vicinity that may prevent your eyes from adjusting to the dark, too.

"If you have clear skies, it’s hard to miss the comet even from heavily light-polluted cities," remarks Gertsman. "As always, I hope my images will inspire people to get out and experience stunning natural phenomenon such as this."