The peaceful protest organized by Extinction Rebellion's Vancouver chapter occupied the Hornby and Smithe intersection for much of Saturday afternoon
Feb 27, 2021 9:00 PM By: Megan Lalonde 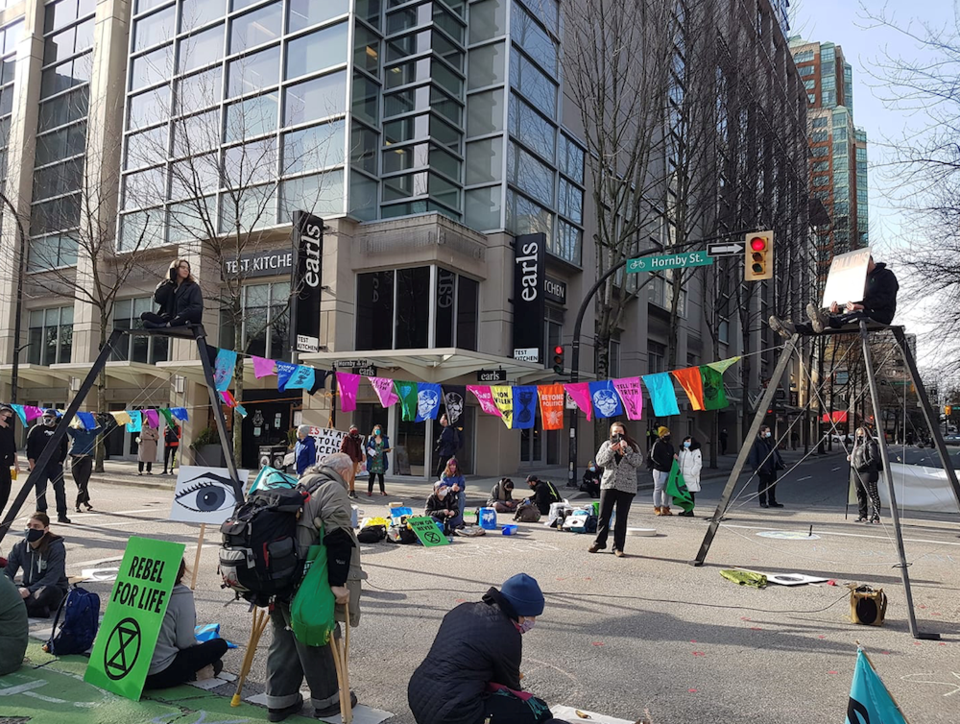 Members of Extinction Rebellion's Vancouver chapter participated in a peaceful protest Saturday afternoon that caused traffic disturbances in the city's downtown core. Two of the demonstrators that can be seen seated atop the constructed platforms were among three protestors arrested by police for mischief and intimidation by blocking a roadway.Facebook photo, Extinction Rebellion Vancouver

A show of "peaceful civil disobedience" in the name of climate action that blocked the Hornby and Smithe intersection for much of Saturday afternoon ended when Vancouver Police stepped in to arrest three demonstrators.

The arrests were made after protestors "refused multiple requests by police to leave," according to a news release issued by the Vancouver Police Department (VPD) Saturday evening.

The Feb. 27 protest was organized by Extinction Rebellion's Vancouver chapter and kicked off on the steps of the Vancouver Art Gallery at noon, featuring a set of speeches calling on governments around the world to do more in the face of the ongoing climate crisis.

About 50 protestors then marched through the city's downtown core to the BC Supreme Court, where the group spilled imitation blood throughout the street, "in mourning for our dying human and non-human relations who are victims of the greed driving human inequity and extinction of species," according to a post on the group's Facebook page.

Among the demands the group says it is calling for are the creation of a citizens’ assembly to address climate and ecological justice, swift action to combat biodiversity loss and the lofty goal of reducing greenhouse gas emissions to net zero in the next four years.

After arriving at the intersection, protesters set up a pair of tripods that rose several feet into the air and were topped by wooden platforms. The two protestors who sat perched on these platforms for several hours were among those arrested, after Vancouver firefighters were called in to assist in clearing the intersection. Firefighters used a crane in their efforts to remove one of the individuals atop the tripods, and reportedly used chainsaws to gradually cut down the legs of one of the tripods so police could reach the other.

Vancouver police said the protest was peaceful, overall. The three people taken into custody were arrested for mischief and intimidation by blocking a roadway—"both Criminal offences," police explained.

The trio was taken to the Vancouver Jail. Each protestor was subsequently released on undertakings after agreeing to attend court at a later date, according to police.

Negotiator talking to protestor at Hornby/Smithe. We police almost a protest/day, almost all end up with no issues. Traffic tied up for >3 hrs & 3 arrested. Go thru great lengths to make sure everyone's safe. TY @VanFireRescue for being amazing partners. #NeverAsEasyAsItSeems pic.twitter.com/OX44mFoFZF


“We do not want to cause disruption to people going about their everyday lives, but we have no other choice to get the message across,” said Grace Grignon, a volunteer spokesperson for the Extinction Rebellion movement, in an online statement posted by the group during Saturday's demonstration.

“Policies put forward by the Canadian government, including continued development of the TMX pipeline, gloss over the existential threat of global warming and ecological collapse. Climate disasters like melting ice caps and huge forest fires get more terrifying by the day, but instead of taking action, they allow emissions and habitat destruction to increase. We demand that the Canadian government create a Citizens' Assembly on climate and ecological justice to create an emergency action plan.”

Extinction Rebellion is a global movement that began in the U.K in 2018. It claims to use non-violent civil disobedience to call for increased climate action, which group members say is necessary "to halt mass extinction and minimise the risk of social collapse."