The book tells the story of a ghost frustrated with his lot in the afterlife and eventually learns to improve his attitude
Feb 5, 2021 2:16 PM By: Cameron Thomson 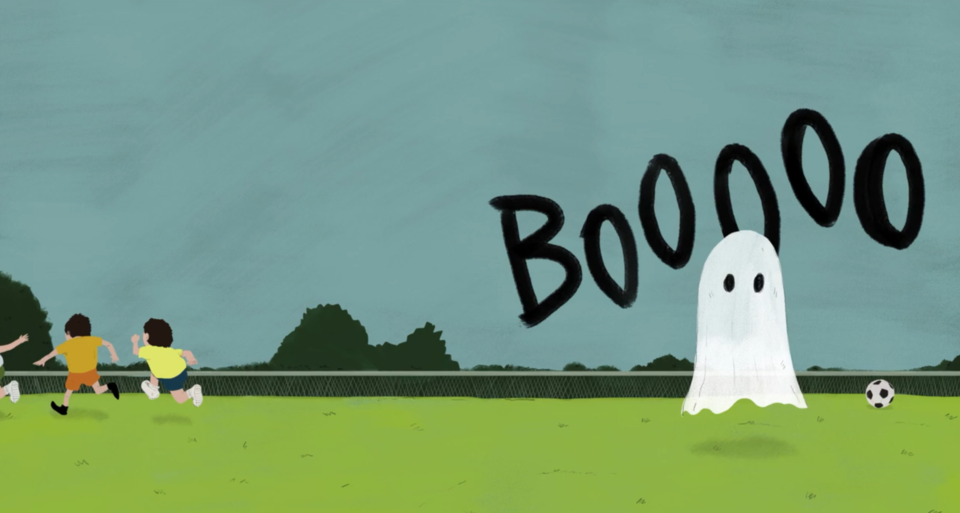 A Vancouver children's author's most recent work, The Ghost Who Cried Boo, is about a spirit who learns to become less lonely by changing his attitude. Pierre Chan

Have you ever thought about why ghosts say “boo”? A Vancouver children’s book writer has found possibly the most adorable explanation for the phantom phenomenon.

Pierre Chan is a Vancouver-based advertisement writer. When he’s not writing advertisements he spends his time working on picture books. Chan’s previous works include Pfffffft: Illustrated fart literature published in 2015 as well as a book called Dumb Answers to Kids' Questions in 2018. In a significant switch in tone, Chan's latest book, The Ghost Who Cried Boo, follows the journey of possibly the cutest ghost you have ever seen going from being constantly lonely to surrounded by new friends.

In Chan’s Kickstarter campaign for the new release he writes this book has a more personal meaning to him and his family than his previous works.

“The Ghost Who Cried Boo is my first children's book, and perhaps the most rewarding thing I've ever written because I'll be able to read it to my 3-year-old niece,” Chan writes.

The Ghost Who Cried Boo is a story of a lonely ghost, lonely because he tires of not being able to eat, be seen in photographs or kick a soccer ball. When things get too much he pouts “Oh boo," scaring away everyone around him and causing him to live a lonely life.

“Eventually, he realizes that people aren’t actually running away from him because he’s a ghost, but because he’s always being negative,” Chan writes. “When he stops being such a pessimist and starts looking at the brighter side of the afterlife, he finally starts making friends.”

George Lin, a Toronto-based art director and illustrator created the imagery for The Ghost Who Cried Boo. To fans of Chan’s previous books, the artwork will be familiar as Lin’s playful style can also be seen in Pfffffft: Illustrated fart literature, as well as many other children’s picture books.

Currently, the Kickstarter has hit over $2,500 of its $3,000 goal. As a backer for the fund there are several reward tiers available, including the new book being sent as soon as it is completed. Once the funding goal is reached the books should arrive approximately 15-17 weeks after the Kickstarter ends.

The Ghost Who Cried Boo is for children ages 3-8 according to the Kickstarter page - but adults can make good use of it too.

“If you don't have kids, you can always get a copy to balance out the pretentiousness of the Tolstoys and Dostoyevskys on your bookshelf,” Chan writes.

More details about shipping and tier rewards can be found on the Kickstarter page.