Park board commissioners request staff consider expanding trial from 10 parks to 23
Jul 9, 2020 9:58 AM By: Mike Howell 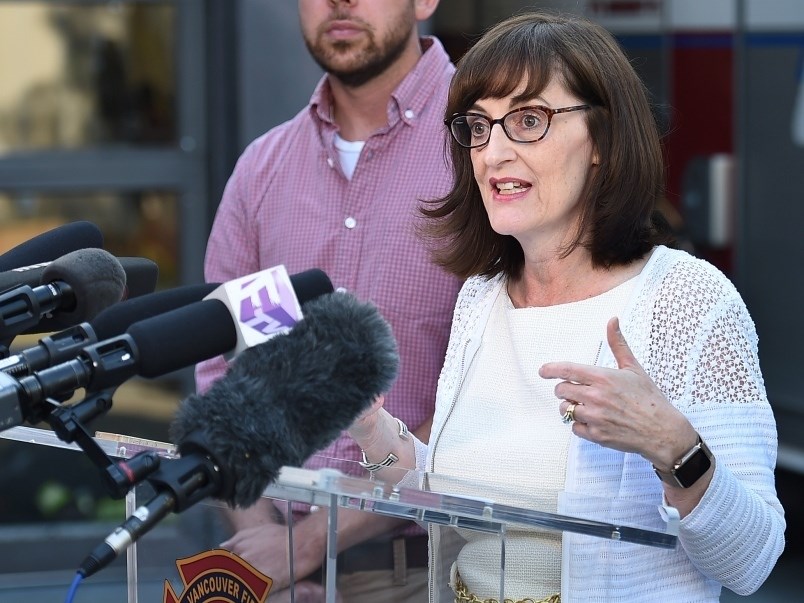 Dr. Patricia Daly has cited in a letter to the park board and in a presentation to city council her reasons against allowing people to legally drink in public spaces such as parks and plazas. File photo Dan Toulgoet
The city’s top public health doctor has warned Vancouver park board commissioners about the consequences of allowing legal public drinking in parks and says she does not support a proposed trial this summer.

Dr. Patricia Daly cited various reasons in a July 6 letter to commissioners for her opposition to a trial, which could begin later this month in anywhere from 10 to 23 parks, depending on the board’s final decision July 20.

Her reasons include increased harms to people’s health, more alcohol-related hospitalizations and the inability for park board staff to adequately monitor a trial that would challenge physical distancing measures during the pandemic.

“Without requisite park board resources to monitor and support physical distancing and discourage unsafe drinking, I remain opposed to the move to sanction alcohol consumption in parks,” she wrote in the letter obtained by Glacier Media.

Daly said her concern about “liquor liberalization” is only heightened further in the context of COVID-19, with recent evidence showing that 25 per cent of Canadians aged 35-54 are drinking more because of the pandemic.

Reasons for the increase include lack of a regular schedule, stress and boredom.

“This is of concern to public health,” she said, although recognized the park board’s motivation to increase access to public space to promote mental and physical health.

“But taking into consideration the long-term trend towards liberalization of liquor access in the province, the well-known risks associated with this increased access, increasing rates of consumption during the pandemic, and concerns about alcohol decreasing inhibitions and potentially increasing exposure to COVID-19 in social settings, I caution the park board against assuming that alcohol is a necessary requirement to facilitate social connection and enjoyment of parks.”

Daly wrote her letter before the park board passed a recommendation Monday night that requested staff consider expanding the initial 10 parks proposed for the trial to include all of Vancouver’s 23 neighbourhoods.

Commissioners also asked staff to consider tying the drinking of alcohol in parks to a meal, and to examine selling liquor from some of the concessions in the parks ultimately chosen for a trial.

In her letter, Daly said she was concerned with “the large number of sites” at 10 and recommended fewer parks for the trial, although she didn’t specify a number. She also recommended park board staff be given sufficient resources to monitor safe implementation of the trial.

The monitoring of the trial was part of Monday night’s debate, with Comm. John Coupar asking Doug Shearer, the board’s acting director of planning and park development, how many park rangers would be required to patrol the sites and what it would cost.

Coupar’s question was related to the 10 proposed parks, which includes Stanley Park, New Brighton Park and Fraser River Park. It wasn’t until later in the meeting that commissioners passed a motion to have staff consider the trial be launched in parks in each of the city’s 23 neighbourhoods.

“We have not gotten to the point where we’ve costed what the staff resources will be that are required to do this,” Shearer said.

“We have started working on considerations about park rangers and other staff, for that matter, who will need to do some work to get this thing up and running and to monitor it properly. As it’s a pilot [program], we’ll be learning as we go, to some extent.”

Vancouver police are on record of supporting a trial.

Howard Chow, one of the city’s deputy police chiefs, told Vancouver city council in May that he supported a trial at beaches and parks. The park board has since focused on parks, although one of the 10 proposed sites is Locarno Beach Park, which is adjacent to the beach and ocean.

“I support a measured approach in terms of a pilot study where we’re looking at the impacts before and after in the community, on those involved in the pilot [drinkers], health authorities and on the police,” Chow said at the time.

“​If it’s something like that, with enough constraints and oversight on it, I think it’s very viable.”

Anyone who has visited a Vancouver park or beach, especially in the summer, knows that people already drink alcohol in those places. Chow said couples having a glass of wine on the beach is “really not our issue, our problem” — a point he made to a question from Coun. Pete Fry about discretion used by officers when enforcing liquor laws.

Chow’s comments were made prior to park board staff identifying the 10 park sites for a trial. The move by the board Monday to increase the number of parks to 23 was not done with consultation from police.

Sgt. Aaron Roed, a VPD media relations officer, told Glacier Media in an email Wednesday that the department stands by Chow’s comments made in May. Roed said the department “supports the use of rules, regulations and monitoring around any trial and would work with [the park board] and the City.”

The request to have park board staff consider allowing the trial to run in parks in 23 neighbourhoods was made by Comm. Dave Demers, who argued he was concerned the 10 sites would simply turn into beer gardens.

“To me, I always thought the core idea of this project was to incentivize people to use their own local park as their own backyard,” Demers told commissioners Monday.

City council, meanwhile, awaits a staff report expected later this month that will identify public spaces such as plazas that could be spots where adults can legally drink alcohol this summer.

Much of what Daly expressed in her letter to park board was shared in her presentation to council in May in which she urged council not to launch a trial.