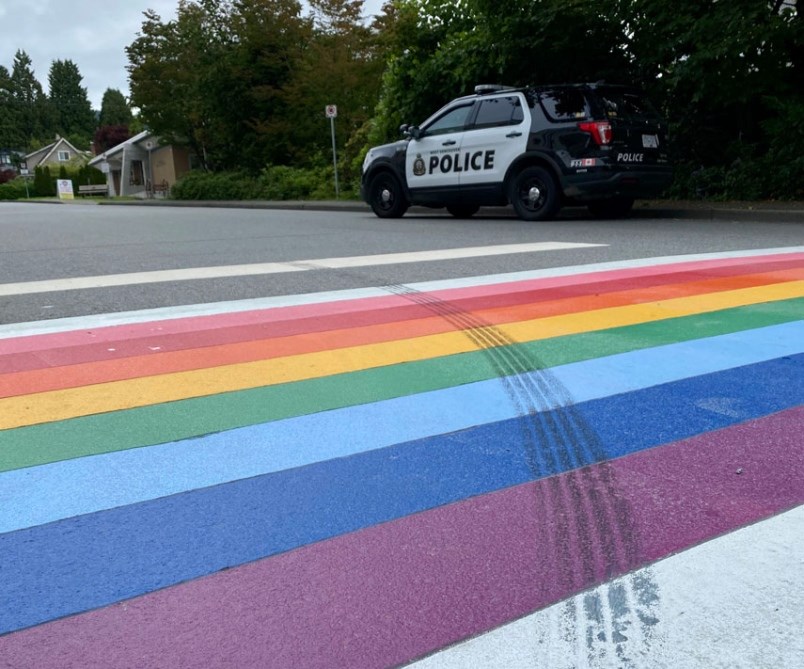 West Vancouver police are looking for two suspects and a black Mustang after the department’s brand new rainbow crosswalk installed for Pride Month was defaced.

The paint was barely dry on the crossing, having only been unveiled at 16h Street at Esquimalt Avenue on June 30. Staff inside the police station heard squealing tires coming from outside around 4 p.m. Tuesday. When officers went outside to see what happened, they noticed someone had deliberately peeled rubber through the crosswalk, damaging it.

“This is very upsetting,” said Const. Kevin Goodmurphy. “For whatever reason, this person has chosen to leave a gesture of hate on a crosswalk that stands for the exact opposite.”

Surveillance footage from the area shows two suspects in a late '90s or early 2000s black Mustang with a red racing stripe. The driver was travelling south on 16th before making a right turn on Esquimalt.

Now officers want to speak to the driver. The crosswalk, which is the first of its kind in West Vancouver, came about through the hard work of two WVPD members, Goodmurphy said.

“The crosswalk itself was a very meaningful piece and it stands and will continue to stand as a symbol of our commitment to promote diversity and inclusion,” he said.

The municipality will try to pressure wash the tire rubber off the red, orange, yellow, green, indigo and violet stripes, but if that doesn’t work, the painting contractor said it will cost about $2,000 to repair.

Goodmurphy said it’s upsetting that rainbow crosswalks are so frequently targeted for vandalism, but he added the mischief is not representative of West Vancouver.

“This impacts the community at large and there are detrimental impacts that it has emotionally for a lot of people, especially given what this crosswalk represents,” he said. “We have had nothing but support from community members following the installation of the crosswalk, and we know that those people represent the majority.”

Anyone with information about the incident is asked to contact the West Vancouver Police Department at 604-925-7300 and reference file #20-7149. If you wish to remain anonymous, visit Crime Stoppers online at solvecrime.ca or call 1-800-222-8477.