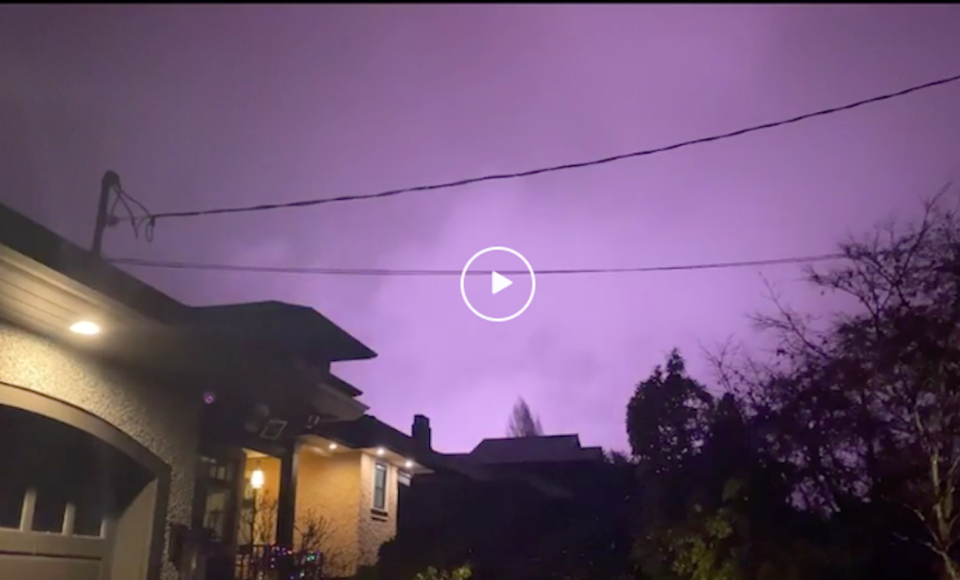 Today, a Metro Vancouverite took to Reddit to share a striking video of electric blue and purple flashes in the sky amidst the windstorm. Photo via u/tdoesstuff / Reddit

Jimi Hendrix once sang about purple haze, but a Metro Vancouver local captured a decidedly vibrant purple colour in the sky last night.

And if you couldn't sleep through all of that wildness, you're not alone.

People from across the Lower Mainland were privy to rattling, windy theatrics overnight, as mother nature unleashed her stormy prowess across B.C.

This morning, however, the region was serene, and blue skies and sunshine greeted our tired eyes.

Today, a Metro Vancouverite took to Reddit to share a striking video of electric blue and purple flashes in the sky amidst the windstorm.

Reddit user tdoesstuff writes that they spotted "Freaky blue and purple flashes from windstorm," but feel that they were "Probably just branches hitting power lines."

What did I just see?

In the comments below the video, people debate whether the wild colours were caused by power lines or if it might have been lightning. Someone in Burnaby says they saw lightning during the storm, while another person in Abbotsford says they saw some, too.

Vancouvernate writes, "This was NOT from power lines...We saw them in west Vancouver up at the top of British properties. They happened not more than 100 feet away from our house. We have below-ground power. They made a very peculiar sound as well.

Environment Canada Meteorologist Doug Lundquist tells Vancouver Is Awesome in a phone interview that the vibrant display in the video is probably lightning, though it is also possible that this was caused by power lines.

That said, Lundquist says the video most likely shows lightning reflecting off clouds. "It was due to the storm--but my first impression is that, because the whole sky is lit up in a big area, it's most likely lightning."

Lundquist adds that he has "evidence from the lightning detection system there was lightning in the area."

After a decidedly wild night, the Vancouver weather forecast calls for a couple of pleasant, sunny days--but don't get too excited.

Starting later this week, gloomy weather is expected to return to the region, and it's difficult to say when we'll see another dry stretch.