Vote postponed on 8.2 per cent tax hike for Vancouver taxpayers

Vancouver city council decided Tuesday to defer a decision on approving the 2020 budget until next week
Dec 10, 2019 5:53 PM By: Mike Howell 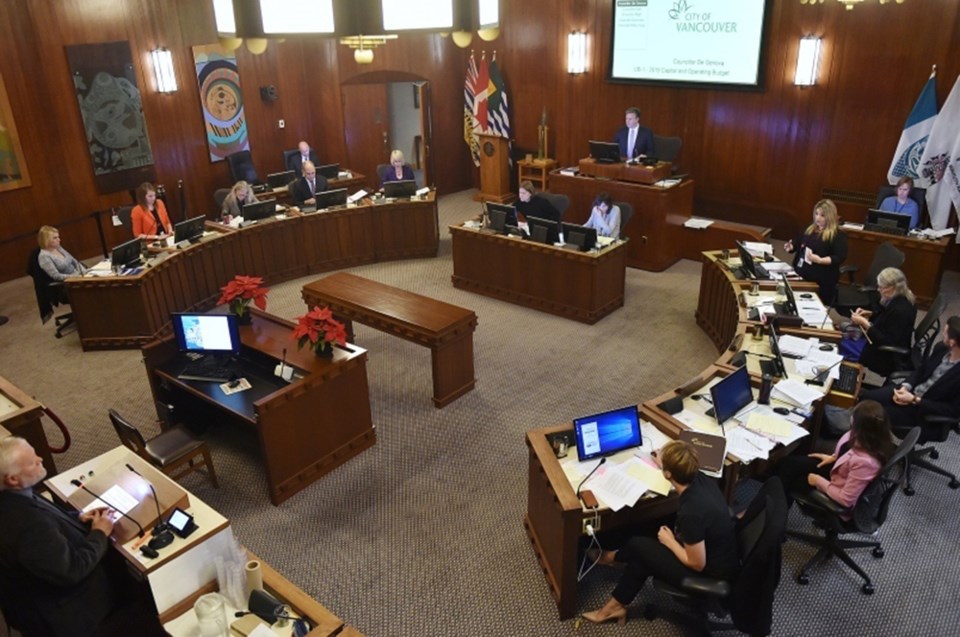 Vancouver city council decided Tuesday to defer a decision on the 2020 budget until next week. Photo: Dan Toulgoet
Vancouver taxpayers will have to wait until next week to learn whether a suggested 8.2 per cent property tax hike will be imposed in 2020.

City council agreed Tuesday to defer a decision on the draft $1.6-billion budget because it wants city staff to find ways to reduce the tax hit on property owners by up to three per cent.

Staff will return Wednesday with a report that will provide options for targeted property tax increases of no less than five per cent, six per cent and seven per cent.

Debate and decision is expected Dec. 17.

NPA Coun. Lisa Dominato, who moved the initial motion to refer the vote on the budget, said council had “floods and floods of correspondence” in recent weeks related to the 2020 budget.

“Largely, the concerns centred around the proposed tax increase and implications for affordability in this city,” Dominato said.

“That is obviously top of mind for people…we feel that we need to take a second sober look at this budget.”

Dominato wanted staff to provide a scenario of what a 4.5 per cent tax hike would mean for the budget, but a majority of council agreed to Green Party Coun. Adriane Carr’s amendment of setting a tax hike at “no less than five per cent.”

Council’s move to refer the vote came after they spent more than two hours asking city staff to clarify costs of items outlined in the draft budget, including $23.8 million in new investments.

Councillors asked about the cost of adding more workers to various departments, the budget for the introduction of a city-wide plan and the ongoing cost of addressing the homeless encampment in Oppenheimer Park.

Several NPA councillors, including Dominato and Colleen Hardwick, have gone on record of not supporting an 8.2 per cent tax increase, with Rebecca Bligh calling it “outrageous.”

Whereas Carr and OneCity Coun. Christine Boyle have said the hike is needed, noting that annual tax increases have been held to a minimum for years.

An 8.2 per cent tax hike would be the biggest property tax hike in the past decade, if council were to approve all the items listed in the 2020 draft budget.

Coupled with an increase in utility fees, the overall increase to property owners would be 9.3 per cent. That would mean the total bill for a home assessed at $1.7 million would pay $354 more than this year.

Though council postponed the vote on the tax increase, it was unanimous in approving fee increases for water and sewer, along with engineering fees and the False Creek Neighbourhood Energy Utility customer rates.

The proposed 8.2 per cent tax hike is being driven by fixed costs — 3.5 per cent of the overall increase — and 2.4 per cent to “fill service gaps and address risk” such as hiring more police officers and firefighters at a cost of $8.2 million.

A city report says the remaining 2.3 per cent of the overall 8.2 per cent hike is tied to $23.8 million in new investments. That includes $6.8 million to “support and encourage more zero emission buildings in the city, address urban heat islands, plan for sea level rise challenge and continue tree planting to improve the urban forest canopy.”

More than half of the budget is funded by property tax.