West Vancouver's Canada Day fireworks could be coming to an end

Normally when there’s fireworks in the West Vancouver council chamber, it’s thanks to a rezoning vote or a debate over public transit. Not actual fireworks.

But after 14 years, the annual Canada Day fireworks off Dundarave may be coming to an end. 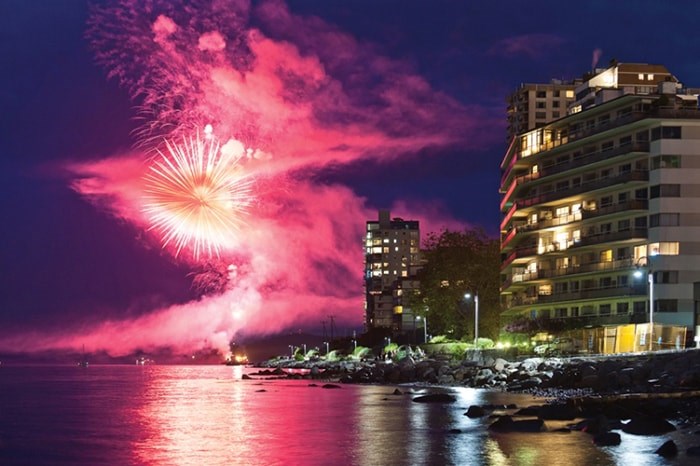 The annual Canada Day fireworks off Dundarave may soon be coming to an end. photo supplied, District of West Vancouver

Since 2014, the Vancouver Fraser Port Authority has been picking up most of the tab, with the District of West Vancouver chipping in just $15,000.

But the port warned West Van, it will be phasing out funding for the Dundarave barge between 2019 and 2021.

The total cost is $80,000 for an 18-minute show. Every year, it attracts about 10,000 visitors to the waterfront, according to staff and thousands more watch from their homes.

But if the fireworks are to happen next year, council will have to come up with $35,000, $10,000 of which they are hoping to secure the sponsorship, grants and other donations, according to staff.

When Canada Day 2021 arrives, the district will be expected to shoulder the entire cost, though staff recommend spending be capped at $25,000 for the event.

In a statement, Gillian Behnke, manager of community relations for the port, said pulling funding for the Dundarave barge was a budgetary decision

“As overall costs continue to increase for large city events, we are focusing our resources on the core elements of Canada Day at Canada Place to ensure we can continue to produce the best possible event for all attendees,” she said.

The district has sought out sponsors every year “with very little success,” said Christie Rosta, events and festival manager for the district.

“We could see the demise of fireworks by 2021. The cost to us will be over $55,000 (more) unless we get federal funds or provincial funds – and I don’t think the province likes us so we won’t be seeing much from them – however, through Canada Heritage, we should be able to get some money together,” he said.

Others, however, are treating the funding shortfall as an opportunity to see the pops and bangs silenced for good. In a letter to council, BC SPCA manager of public policy Amy Morris asked council to give up the fireworks display for the sake of the critters.

“The noise by caused by fireworks is frightening and stressful for many animals,” she wrote.

Spooked animals are known to panic, run away or dart into traffic she added, and otherwise friendly dogs can become aggressive. Wild animals and birds are also scared out of their dens and nests and into danger.

“Those that are not harmed are still disturbed, leading reductions in natural breeding behaviours as well as the abandonment of their young, their nests or dens.”

Council voted 4-1 in favour of a motion to up the annual fireworks budget to $25,000 for 2020 and to seek out grants and donations that might cover the rest. Only Coun. Sharon Thompson was opposed.

Mayor Mary-Ann Booth hinted it may be time for West Vancouverites to seek out their patriotic “oohs” and “ahhs” elsewhere.

“The port puts on a great show and people can see it from West Vancouver. We have limited funds and we have to put them into priority items. Good luck,” she told staff. “You’ll probably hear from the community on this.”