Demonstrators standing in solidarity with the Wet’suwet’en Nation may focus on another Vancouver bridge today.
Feb 13, 2020 7:28 AM By: Lindsay William-Ross 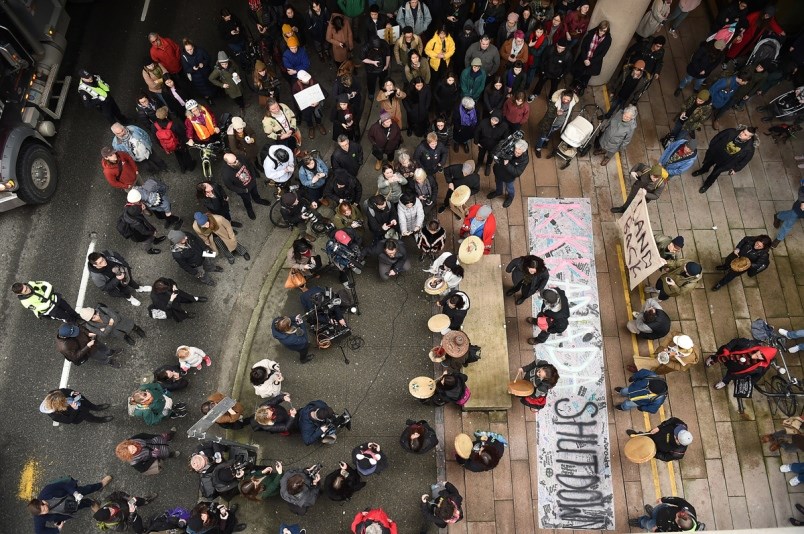 Demonstrators standing in solidarity with the Wet’suwet’en Nation may occupy the Lions Gate Bridge Thursday.

Blockades and protests have been taking place for the past several days in B.C., including in Vancouver, first focusing on ports before switching to major crossings in the city. Protests were staged Tuesday at Cambie and Broadway - blocking the Cambie Bridge - and Wednesday blocking the Granville Street Bridge.

West Vancouver Councillor Craig Cameron tweeted Wednesday that the demonstrators may focus their attention on the Lions Gate Bridge Thursday.

The demonstrators are staging the protests in opposition of the planned natural gas pipeline through traditional Wet'suwet'en territory in northern B.C.

Despite arrests at demonstration sites, Wet'suwet'en chiefs have pledged to continue the fight.

"We're not giving in, we're home, we're looking after our home," said Na'moks, one of five Wet'suwet'en hereditary clan chiefs who assert title to a vast 22,000-square-kilometre area because they have never signed a treaty ceding their traditional territories.

Coastal GasLink said in a statement Tuesday that it will redouble efforts to engage with the hereditary chiefs and with the Unist'ot'en in search of a solution that benefits the Wet'suwet'en people.

On Wednesday, a legal challenge to the pipeline was launched, however it was not based on hereditary land rights.

Two house chiefs have applied to the Federal Court of Canada to halt the $6.6 billion natural gas pipeline on the basis that it would violate Canada’s commitment under the Paris Agreement to reduce greenhouse gases.

V.I.A. spoke with demonstrators Wednesday who were taking part in the Granville Street Bridge action; you can hear what they are saying in video interviews HERE.

With files from Nelson Bennett/BIV, Elana Shepert/V.I.A., and The Candian Press