The widow of a construction worker killed on the job has filed a lawsuit claiming the truck her husband was hit and killed by had a defective parking brake.
0
Sep 9, 2019 7:21 AM By: Business In Vancouver 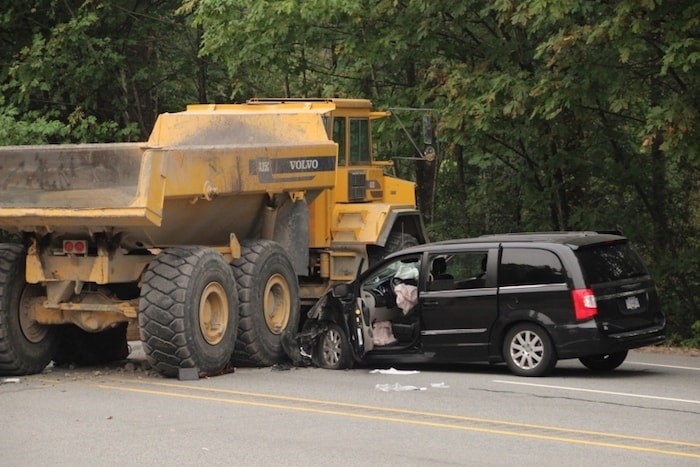 In 2017, an unoccupied dump truck rolled down a hill from a Riverview job site and onto Lougheed Highway in Coquitlam, killing the driver as he jumped out of the truck and a passenger in another vehicle. Photo by Shane Mackichan/Tri-City News

The widow of a construction worker killed on the job at Coquitlam’s Riverview Hospital site in September 2017 is suing Volvo Construction Equipment Canada Inc., claiming the truck her husband was hit and killed by had a defective parking brake.

According to the claim, Robert Vanderhoef was experienced in the construction industry as a hauler operator.

On September 5, 2017, the lawsuit says, Vanderhoef was operating a 1996 Volvo A35C articulated hauler at a construction site at 2601 Lougheed Highway in Coquitlam. Vanderhoef had engaged the truck’s parking brake and got out to open a gate, according to the claim, but the brake failed and the truck rolled and hit him, continuing on to Lougheed Highway, where it struck other vehicles.

Vanderhoef died later in hospital, while a passenger in a car hit by the truck died at the scene.

Lucente and Vanderhoef claim the parking brake on the truck was defective.

“As designed, it is possible for the parking brake lever to partially engage the detent or otherwise be held in place temporarily and activate the red lamp indicating the brake has been set,” the claim states. “In this position, vibration of movement of the Truck can cause the lever to disengage and release the parking brake.”

Before the accident, Volvo allegedly had investigated the issue and knew of the defects and later changed the design of its parking brake levers on heavy articulated haulers, while failing to warn drivers of the risks.

Amanda Vanderhoef seeks damages under the Family Compensation Act, and Lucente seeks damages for psychological and psychiatric injuries. According to an online obitiuary, Robert “Bobby” Vanderhoef was 32 at the time of the accident, and left behind his pregnant wife and two stepsons.

Vanderhoef and Lucente’s allegations have not been tested or proven in court and the defendants had not responded to the claim by press time.