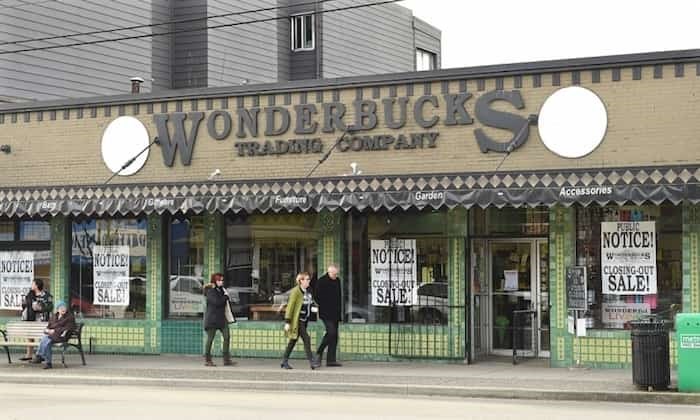 Wonderbucks operated at 1801 Commercial Dr. for 18 years before closing in early 2017 after rent and property taxes increased. The building has been vacant since then. Photo Dan Toulgoet

The Wonderbucks property at 1801 Commercial Dr., and the parking lot behind it at 1656 East Second Ave., have sold for a reported $8.61 million.

Wonderbucks operated on the site for 18 years before closing in early 2017 after rent and property taxes increased. The building has been vacant since then.

The property was put up for sale in the spring of 2018 as a “retail corner with development potential.”

The 1801 Commercial Dr. site is zoned C-2C, which allows for commercial activities and personal services that require central locations to serve neighbourhoods. Residential uses above grade level and pedestrian-oriented shops are permitted, while a building, typically to a maximum height of four storeys, could be allowed, according to information the City of Vancouver provided to the Courier last April.

The building would be assessed for its heritage value if the property is redeveloped.  If it were to be deemed to have value or significance, additional incentives beyond what is allowed for in the C-2C zone could be considered in exchange for preservation, rehabilitation and designation of the building or parts of it.

The land on East Second Avenue, meanwhile, is zoned RM-4, which allows for multi-residential uses.