You can view the largest bald eagle gathering in the world in B.C. 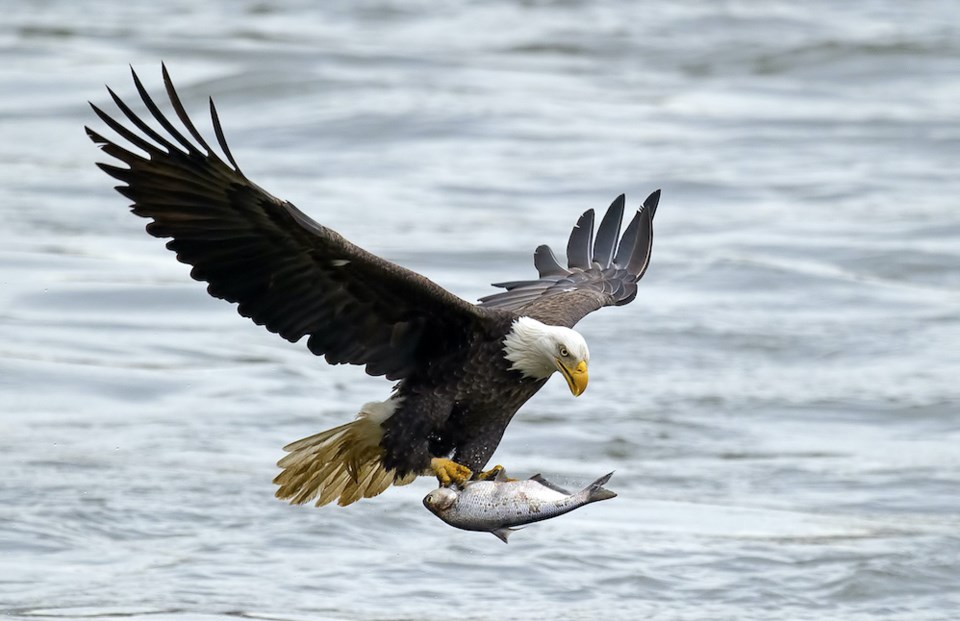 They are beautiful, regal birds with an astonishing wingspan of up to eight feet. And while seeing one on its own is a remarkable sight to behold, seeing a convocation of the soaring raptors is truly spectacular.

Starting this November, over 35,000 eagles will pass through the lower Fraser Valley until February, with thousands of the birds accumulating on Harrison River daily.

The awe-inspiring event is the largest bald eagle gathering on the globe.

The Harrison River is a tributary of the Fraser River and runs about 18 kilometres in length.

As rivers in Yukon, Alaska and northern British Columbia ice up, food supplies freeze too, which forces the eagles south.

The eagles remain in the area until February although a few thousand may fly further south into Washington, Oregon and California as winter deepens.

The Fraser River is a whopping 850 miles long and is the largest producer of sockeye salmon in the world. As such, the eagles migrate great distances to feast on the five species of salmon that are spawning during the fall.

A company called Fraser River Safari Jet Boat Tours allows guests to experience the wilderness up close and personal from the comfort of a custom-designed “safari craft.”

Their Fraser Valley Bald Eagle Festival Tours, for example, take you into the Chehalis/Harrison Estuary and up close to the hundreds, even thousands of eagles that return each November.

Bald Eagles in the Lower Mainland

Dr. Christian Sasse, a local photographer, has shared numerous videos and photos of the regal raptors in the Lower Mainland and Alaska to his social media channels.

In a previous interview with the Vancouver Courier, Sasse highlighted that the Vancouver landfill was another great place to view the birds congregating.

He said eagles were very clever hunters and observed gulls and their movements to find where the food sources were.

“They come out of nowhere – and suddenly you have hundreds in a few minutes because they just watch everything. Their eyes are much, much sharper, than human eyes. They have a better perception of what’s going on and they see small details we can’t see.”

The beautiful birds can also be spotted near the shore along Boundary Bay.

More- Lots of Eagles 🦅 - I was asked if I have more Eagles including some close-ups and of course some eagles flying. And yes I do. So enjoy this while it lasts. @sassephoto Copyright #nature #natgeowild #vancouver #eagles #raptors #wildlife #bbcearth #natgeotravel #elite_raptors #bestbirds

Normally at this time of year I'd be counting down the days to my trip to BC to see eagles. Covid has changed that but at least I have photos, lots, and lots, and lots of photos! This is one of the spirit trees from 2014. There were 2 of them but 1 came down since this was taken. #baldeagles #hellobc #harrisonriver #harrisonmills

- With files from the Canadian Press and Elisia Seeber.

This video shows huge gathering of bald eagles at Vancouver Landfill
Jan 11, 2019 7:26 AM