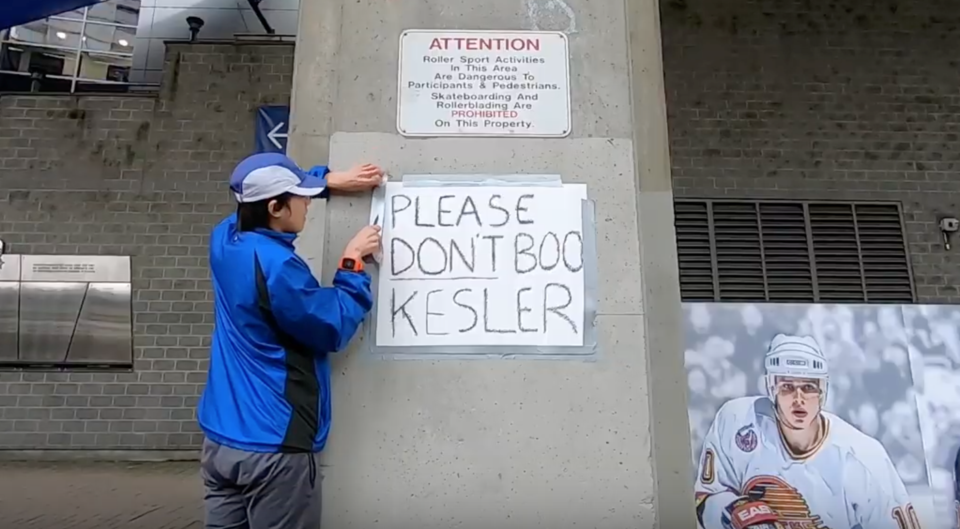 Steven Huynh erects a nice sign outside of Rogers Arena in advance of Ryan Kesler returning to town. Screengrab

Steven Huynh is back with another video on his Stevo Canuck YouTube Channel.

You might remember his recent videos where he complained about the snow, looked for bad drivers in Richmond, and showed you where all the crows are flying to every night as they make their way out of the city.

In his most recent video he heads to Rogers Arena with the intention of putting up a sign encouraging people who are attending the Canucks game tonight not to boo former Canuck, Ryan Kesler.

Kesler will be part of the cermony where the team will be retiring the Sedins' jerseys, and Huynh is (rightfully) concerned that people might boo this former Canuck.

Rogers Arena security was more concerned about his presence on their private property, when he erected a non-offensive sign on the SkyTrain pillar that's on their property.

Watch what happened in the video below.

B.C. couple share emotional Valentine's Day moment thanks to daughter's surprise (VIDEO)
Feb 19, 2020 5:20 PM
Comments
We welcome your feedback and encourage you to share your thoughts on this story. We ask that you be respectful of others and their points of view, refrain from personal attacks and stay on topic. To learn about our commenting policies and how we moderate, please read our Community Guidelines.