If you are excited for the upcoming ski season, you’d want to make sure you’re ready to hit the slopes early.
0
Nov 1, 2018 3:38 PM By: Vancouver Courier

If you are excited for the upcoming ski season, you’d want to make sure you’re ready to hit the slopes early.

AccuWeather released its winter forecast on Wednesday, predicting a lack of late-season snow will spell a shortened ski season across much of British Columbia and Alberta.

“The winter weather pattern is expected to be dominated by a developing El Niño in the equatorial Pacific,” AccuWeather Senior Meteorologist Brett Anderson says.

El Niño occurs when the waters in the tropical Pacific Ocean are warmer than normal.

AccuWeather predicts the anticipated development of El Niño will have a strong influence on the weather pattern across western Canada, including the path that storms take when tracking from the Pacific Ocean into North America. 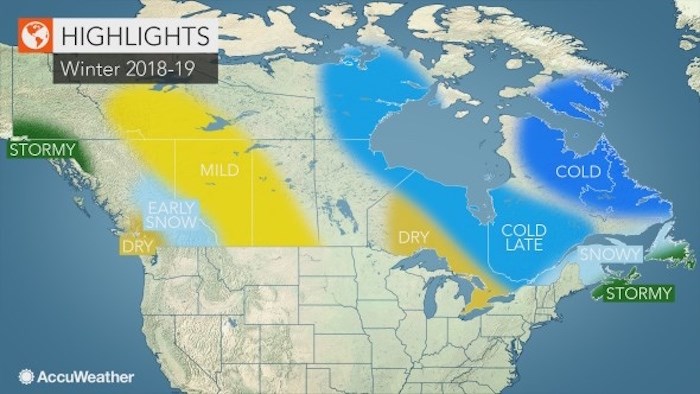 AccuWeather has released its winter forecast.

“The primary storm track off the Pacific will be directed into northwestern B.C. and the Yukon Territory with above-normal snowfall,” Anderson says.

This will leave the rest of B.C. milder and drier than normal throughout most of the winter, including in Vancouver and the city’s suburbs.

This winter pattern will have implications on the region’s ski resorts, especially those in the Canadian Rockies.

“A majority of the snowfall in the western mountains and ski areas will come early in the season before drier weather takes hold,” Anderson says.

Although this translates to a healthy start to the winter ski season, the lack of storms later on in the season may cause ski resorts to close earlier than they have in recent years.

So, don’t waste any time if you want to make the most of the snow.