The otter pup was likely just 10 days old when he was discovered hypothermic and hypoglycemic near Kyuquot. B.C.
Jul 17, 2020 7:36 PM By: Megan Lalonde 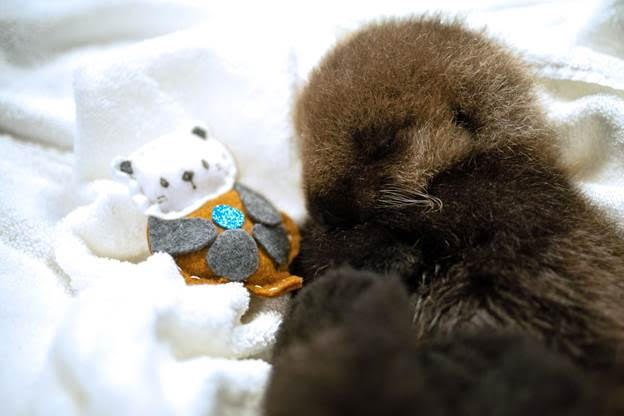 Joey is a male sea otter pup that Vancouver's Marine Mammal Rescue Centre believes was just 10 days old when he was discovered near Kyuquot, B.C.

Joey, a weeks-old male sea otter pup, might be the Ocean Wise Marine Mammal Rescue Centre's newest resident, but he's already captured hearts around the world since he was discovered orphaned, hypothermic and hypoglycemic near Kyuquot, B.C.earlier this month.

(Seriously - he was even featured in People Magazine.)

If like us, you can't get enough of the tiny otter, we've got some good news: Thanks to Joey's care team, you can now keep up to date on his rehabilitation journey via a 24/7 livestreamed ‘JoeyCam’.

As the Vancouver Aquarium rescue centre explained in a release, the webcam is fixed on his "crib" where the "criminally adorable" baby otter can be spotted napping most of the day, and occasionally feeding, grooming or bathing.

“We’re really happy to see Joey’s progress. He’s hitting a lot of the developmental milestones we’d hope to see in a pup this young and seems to be settling into his care routine quite well. He’s feeding a lot--which is a great sign,” said Lindsaye Akhurst, manager of the Marine Mammal Rescue Centre in the release.

According to the rescue centre, Joey was rescued after a concerned member of the public heard the sea otter pup vocalizing overnight on July 2. A deceased adult sea otter, presumed to be Joey's mother, was also discovered in the area the next morning.

This is Joey's story. Discovered orphaned at 10-days old in Kyuquot, he's now in 24/7 care at the @MarineMammalRescue Centre. You can help support his care at Ocean.org/Otter or 'adopt' him as your very own at MMRPatients.org.

As the rescue centre explained in the release, wild sea otter pups are "incredibly dependent" on their mothers for the first six months of their lives, with moms normally responsible for teaching their pups how to groom, swim and feed.

Added Akhurst, "Joey still has a long journey ahead of him in order to master those essential skills for himself.”

Those interested in helping support Joey's intensive care and rehabilitation journey can "adopt" the pup, or otherwise donating to the Rescue Centre.

The Vancouver Aquarium-based Ocean Wise Marine Mammal Rescue Centre — which serves as a hospital for sick, injured or orphaned marine mammals — is unique in Canada, operating under the authorization of Fisheries and Oceans Canada. According to the centre, its team rescues, rehabilitates and releases more than 120 animals each year; always with the intent to return the animal to the wild as soon as possible.

If you see marine wildlife in distress, please keep people and pets away and call the Ocean Wise Marine Mammal Rescue Centre hotline at 604.258.SEAL (7325) or Fisheries and Oceans Canada incident reporting hotline at 1-800-465-4336.

B.C. man under investigation for allegedly feeding Timbits to grizzly bears again
Oct 1, 2020 1:48 PM
Comments
We welcome your feedback and encourage you to share your thoughts. We ask that you be respectful of others and their points of view, refrain from personal attacks and stay on topic. To learn about our commenting policies and how we moderate, please read our Community Guidelines.