Three canine survivors of Hurricane Dorian could soon be living in Canada thanks to a group of Burnaby firefighters who spent last week in the Bahamas helping with recovery efforts on the storm-ravaged islands.
0
Sep 17, 2019 5:02 PM By: Cornelia Naylor

Three canine survivors of Hurricane Dorian could soon be living in Canada thanks to a group of Burnaby firefighters who spent last week in the Bahamas helping with recovery efforts on the storm-ravaged islands. 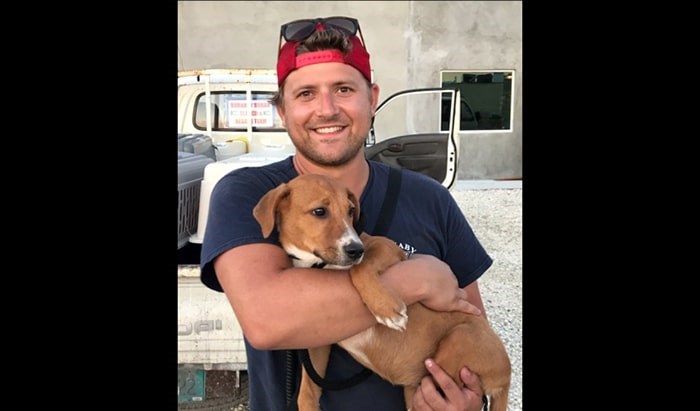 Burnaby firefighter Scott Murchison has signed up to adopt this puppy rescued after Hurricane Dorian in the Bahamas. Photograph By Contributed

The area was among the hardest hit by the hurricane earlier this month.

As of Monday, 51 people were confirmed dead but that number was expected to rise.

“It was surreal,” Burnaby firefighter Scott Murchison told the NOW after getting back Sunday. “You go into the town and it’s obliterated. No one’s around. I expected to see more people, more inhabitants, but obviously they’d either fled at that point or else they were gone.”

One thing living among the wreckage, though, were dogs.

At night, they were skittish and unapproachable, according to Murchison, but during the day they’d come up to team members, curious and hungry.

Murchison and some of the others were soon spending their evenings collecting the dogs and handing them over to International Fund for Animal Welfare workers who were on Abaco to rescue abandoned pets.

“When you search for dead bodies all day, truthfully, it’s just satisfying to find something that’s living,” Murchison said.

The dozen or so dogs the team found have been flown to Fort Lauderdale, Fla. where they will be kept for 30 days so any surviving owners have time to claim them. 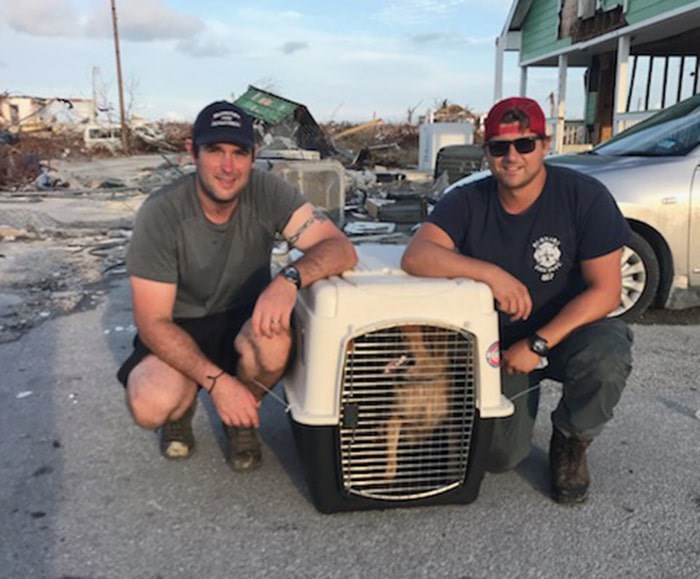 Burnaby firefighters Ryan Berry and Scott Murchison pose with a dog their team rescued on Great Abaco Island in the Bahamas. – Contributed

Three Burnaby firefighters (Murchison, Ian Heatherington and Ryan Berry) have signed up to adopt dogs should they remain ownerless.

Heatherington put his name down for a young potcake, a kind of mixed breed dog common to the Caribbean.

“It kind of took a shine to me and it rolled over on its back,” Heatherington said of finding the dog. “For whatever reason it bonded with me.”

Murchison signed up for a four-month-old puppy the team found playing across the road from The Mudd, a shantytown levelled by the storm.

“She had a big cut on her inner thigh and a cut on her back and a bit of stuff going on in her ears,” Murchison said. “We had rescued a few other puppies by that point, and it doesn’t take long for them to deteriorate because, obviously, there’s no clean water around and no one’s looking after them.”

Murchison and his girlfriend have already taken to calling the pup Abby – after Abaco Island where she was found.