This B.C. wildlife society is caring for 18 orphaned bear cubs and needs help

Critter Care Wildlife Society is currently caring for 18 orphaned bear cubs and needs donations to support each cub until they are old enough and strong enough to have another chance to live in the wild.
0
Oct 10, 2019 5:33 PM By: Elisia Seeber

It has been a tough season for Critter Care Wildlife Society. 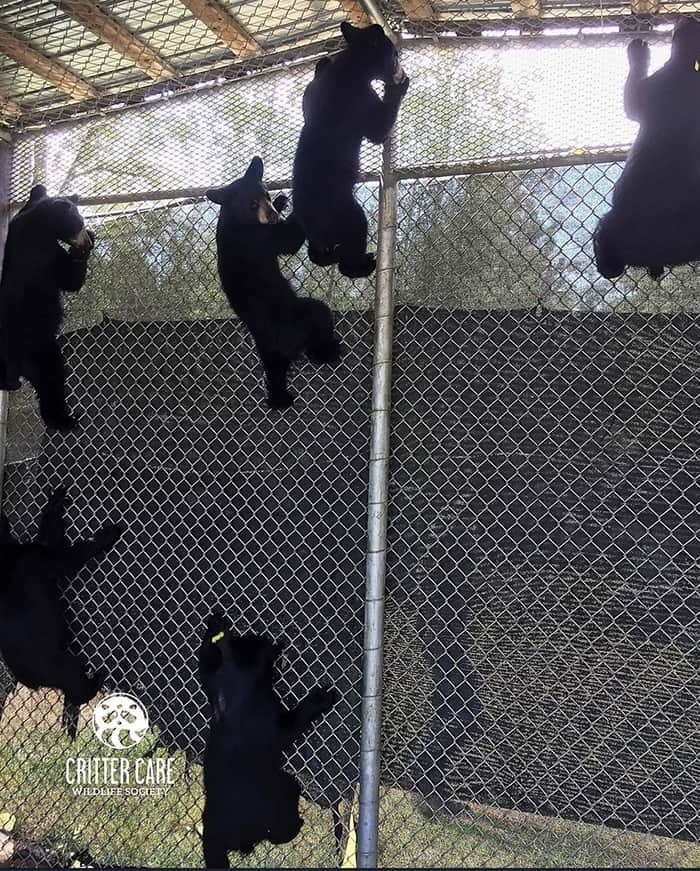 There are 18 bear cubs being cared for at Critter Care Wildlife Society. Photo: CCWS

“We might get an odd couple early in the year – but never 18,” she told Vancouver Is Awesome.

“That’s it for the year. We’ve reached our capacity because we don’t have the resources.”

The centre in Langley has provided care and rehabilitation to mammal species native to B.C. for the past 30 years. In any given year the centre will help between 3000 and 4000 animals. Without any government funding, CCWS relies heavily on fundraisers and public donations to support the animals.

Bear cubs in particular are costly to care for. Having 18 bear cubs makes things even harder. Especially when they can eat 550 pounds of food a day collectively.

“It takes about 10,000 to raise a cub and we get absolutely no funding,” Martin said.

The centre is aiming to raise $200,000 through its Save Our Bears fund to be able to care for each cub until they are old enough and strong enough to have another chance to live in the wild.

The public donations not only provide food and medication but also enriched environments to ensure a bear’s successful release. All the animals receive large portions of natural feeds as much as possible, including fruit, salmon and produce. Enrichment for bear cubs includes anything from logs to climb, honeycomb to discover, and berry bushes.

Martin said, sadly, most of the bear cubs were orphaned because of negligence of individuals or communities that don’t follow Bear Smart policies to protect them.

“It’s a people problem, it’s not a bear problem, but unfortunately the bears suffer,” she said.

“It’s very frustrating and it’s frustrating to the general public to see this happening.”

She said the stories behind the orphaned cubs were all too similar, from the cub that lost his mother by a hit and run driver, to the three Port Moody cubs that witnessed their mother being shot to death.

From April to September 2019 the B.C. Conservation Officer Service received 16,380 calls in relation to black bears.

COS records show that during that same time period officers destroyed 411 black bears in response to a report of human-wildlife conflict. A further 85 black bears were killed by other agencies or the public.

The COS highlighted that the main cause of conflicts in B.C. was access to non-natural food sources.

“Bears that learn how to access exposed pet food, ripe fruit, improperly stored garbage, dirty barbecues or easily-accessible composts become conditioned and will continue to return to the food source,” the COS stated.

There are many ways residents can help prevent this from happening, including by securing their garbage, freezing odorous organics, keeping garbage carts clean and only placing them by the roadside on the morning of collection. More information can be found on bears, attractants and how to reduce human-wildlife conflict on the COS website.

Martin said people needed to "learn to live with bears, they are a part of our environment."

"Be bear aware and do the proper thing," she said.

Here are some quick tips to help reduce the number of human-wildlife conflicts:

- Place carts at the curb side on morning of collection only

- Manage fruit trees by picking fruit as it ripens

- Store fridges and freezers inside your garage or home

- Clean BBQ grills and grease traps after each use

- Keep dogs on a leash when on the trails

CCWS is also hosting a Critter Care Pub Night event at Rusty’s Neighbourhood Pub in Cloverdale on Saturday Oct. 19 to raise money for the bears.

Go to Save Our Bears to donate.

Find out what to do if you encounter a bear in the wild here.