B.C. paddler fights to save turkey vulture after eagle attack 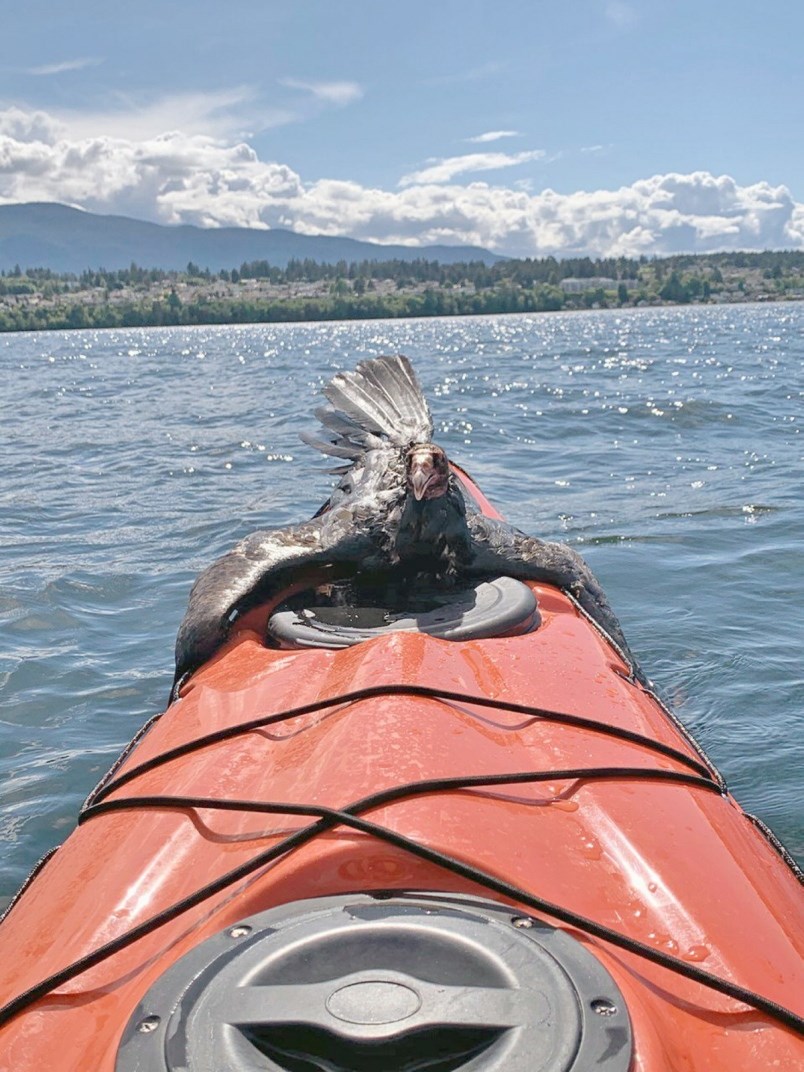 A turkey vulture rescued by Hilary Eastmure from the water off Newcastle Island on the Victoria Day long weekend. PHOTO BY HILARY EASTMURE

Hilary Eastmure learned first-hand that nature is both beautiful and brutal on a kayaking trip around Newcastle Island on the Victoria Day long weekend.

The former CFAX news anchor was paddling with her partner, Greg Brown, in the quiet waters of the Departure Bay channel when she saw two eagles chasing another bird.

“We stopped. And one of the eagles grabbed the other bird and dived straight down into the water. From a distance, I thought it was a smaller bird. I thought it was maybe a crow. And the eagle sat on it in the water for a couple of minutes. I thought maybe it was trying to drown it,” said Eastmure.

“I paddled over expecting to find a drowned crow in the water. And as soon as I got close enough, I saw the bald head bobbing in the water and I couldn’t believe it was a turkey vulture. I could see this poor turkey vulture. And it was looking at me and kind-of crying out for help so I made a split-second decision to see if I could get close enough to put my paddle under it and lift it up out of the water. I could see there was no way it could get out of the water by itself.”

Surprisingly, Eastmure scooped up the bird easily on her first try and placed it on the front of her kayak. She and Brown paddled to the shore of Newcastle Island and called the wildlife emergency line at the North Island Wildlife Recovery Centre.

Derek Downes answered and told Eastmure that bringing the injured bird in would be its best chance.

“At that point, I felt committed. … We decided to try our best,” said Eastmure.

She followed Downes’ instructions and put her sweater over the bird’s eyes to help it relax. She used the sleeves to tuck its heavy wings onto the bow so they weren’t dragging in the water.

“Then I gave it a pep talk the whole way as I was paddling back to the marina. The bird wasn’t struggling. It was just lying there quietly and taking little raspy breaths. I was telling him he was going to be okay, he was a tough vulture, he was having a bad day but we were trying to get it to someone who could help it. We paddled as fast as we could, then we wrapped it in a blanket at the marina and carried it to the car.”

They propped the turkey vulture up on a lifejacket to try to make it comfortable and drove to Errington. “I was turning around lots to make sure it was still breathing,” she said.

As soon as they arrived, two volunteers came out and carried it away for treatment.

The bird, by now nicknamed Victor-Victoria by Eastmure, survived its first night. But its injuries were too severe and the turkey vulture died.

“Hilary did everything right. Anybody who saw that would instinctively want to help,” said Downes, the animal care technician who cared for the mortally wounded bird. “I would have done the exact same thing in Hilary’s position.”

It’s normal for eagles to hunt turkey vultures, especially at this time of the year and especially on Vancouver Island, said Downes.

“There’s a high eagle population and there’s scarcity. The fish stocks are not what they used to be so eagles are hungry, especially at mating and breeding season where they have chicks.”

Ideally, eagles hunt for fish. But they’re indiscriminate, they will take absolutely what they can get, said Downes.

Downes believes the eagles took the turkey vulture down into the water, then realized he was too heavy for them to swim back to shore with, so they abandoned their kill.

“The turkey vulture became too much so they just let it go. That’s when Hilary was able to get him. But unfortunately, eagles’ talons are like knives on the end of a vice grip,” Downes said.

“They’re extremely strong and there was too much internal damage and the turkey vulture could not survive. It’s an unfortunate situation, because the eagles are just doing their thing. They have little beaks to feed so they are taking anything that they can.”

“Unfortunately, it’s a lose-lose situation. That eagle exerted energy to try and make a kill to try and feed its young, but came up empty-handed and the turkey vulture died anyway,” Downes said.

Eastmure, manager of Well Read Books in Nanaimo, a non-profit bookstore that supports literacy on central Vancouver Island, has spent time reflecting on her surreal experience.

“The animal rescue world is hard and it’s heartbreaking,” she said. “I think the need for an organization to care for injured wildlife is very important and I so appreciate that NIWRA exists. The work they do is amazing and I’m sure it’s not easy.”

She knows some people would criticize her for interfering in nature, but Eastmure said it didn’t seem right to let a majestic turkey vulture suffer a slow death.

“I don’t want to interfere in nature, but I don’t want to see an animal suffer. It’s not like I tore the bird from the talons of the eagle. The eagle had taken off and it just didn’t seem right to leave it.”

The encounter has made her think about the ways our actions have an impact on wild animals around us.

“We’re already vegetarians,” she said. “It’s making me think of ways we can be more conscientious consumers. It makes me consider the way we take certain animals for granted.”

Eastmure has also realized that she is the kind of person who will do something to help someone or something if she can.

“And I’ll continue to do that as best I can.”

In memory of Victor-Victoria she has symbolically adopted Igor and Vladimir, two turkey vultures at the recovery centre. Symbolic adoptions pay for food, check-ups, medical care and toys to enrich and stimulate natural behaviours. The centre receives no government funding for this care.

For more information, go to niwra.org.