High bear activity has prompted Metro Vancouver to close the Oliver Road entrance to Minnekhada Regional Park to vehicles for the rest of the summer.
0
Jul 3, 2019 3:37 PM By: Diane Strandberg

High bear activity has prompted Metro Vancouver to close the Oliver Road entrance to Minnekhada Regional Park to vehicles for the rest of the summer.

Markus Merkens, a natural resource management specialist with Metro Vancouver, said bears that live in the Coquitlam park cross the road as many as 36 times a day. 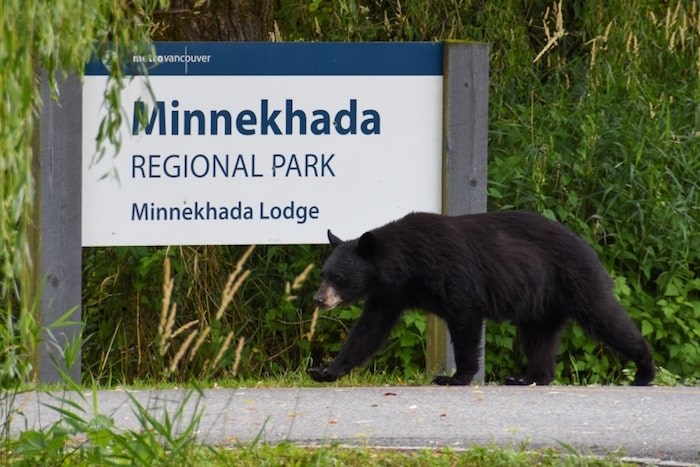 With blueberry season in full swing and the resulting bear activity, Metro Vancouver has closed to cars the Oliver Road entrance to Minnekhada Regional Park. Photo by Stefan Labbé/Tri-City News

And while cyclists and pedestrians are allowed to use the gated road they should stay a minimum of 100 metres from any bears they see. Cars meanwhile, must keep out, and parking is not allowed along the road, either.

It’s a safety precaution, Merkens said, because bears can be unpredictable and also get used to people, which heightens the potential of a bear/human conflict.

He said people have been showing up to photograph bears that cross the road to get to blueberry fields and their cars create traffic jams and potentially dangerous conditions along the narrow road.

“What happens when bears are on the road, people tend to use the car as security cover. They think they’re safe in the car. They park and then approach bears closely or inadvisably.” 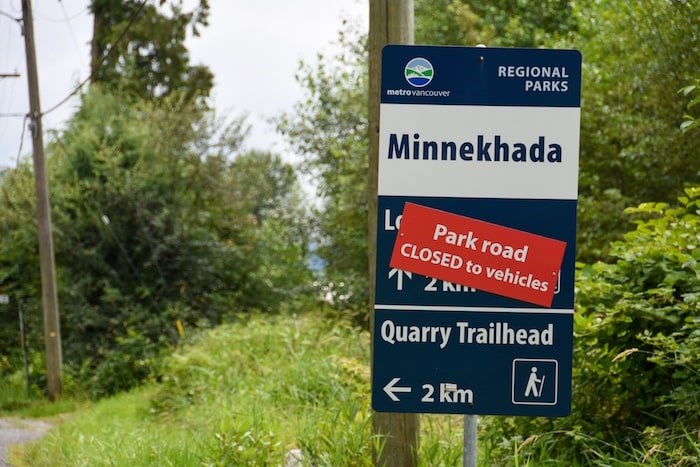 Metro Vancouver has closed the Oliver Road park entrance to vehicles because of bear activity in the area. Photo by Stefan Labbé/Tri-City News

Leaving the car behind and walking into the park, as two reporters from The Tri-City News did on Tuesday, bears truth to the biologists’ description of bruin activity.

Walking past the iron gates, a bear was spotted walking into the blueberry fields, and about 20 minutes later, the same bear, or possibly another, ambled down the road and past the sign to Minnekhada park.

Merkens, a biologist, has been studying the bears for the past two years after Metro Vancouver installed 16 cameras to capture bear activity in the park and along Oliver Road.

Footage has revealed the park is a popular haunt for bruins that court, mate and raise their cubs in the cover of forest and fields, with as many as 25 possibly living in the park.

“We’re compiling all the data for the past two years for a study that will be made available at some point,” Merkens said.

Cars can still access the park and its many trails via the Quarry Road entrance and people who do visit the park this summer should be aware they may run into a bear, and if they do, should give the creatures some space. Problems only arise when people act inadvisable around the bears, getting too close or feeding them. 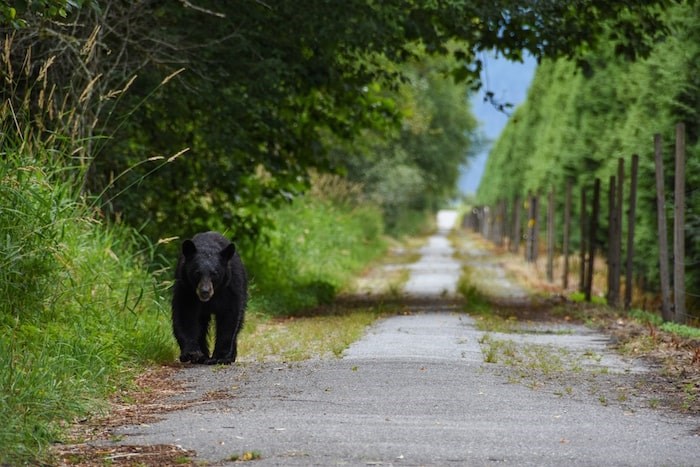 A bear slowly walks down the road toward the Minnekhada Regional Park entrance. The road has been closed to vehicles because of high bear activity. Photo by Stefan Labbé/Tri-City News

“In order to keep people safe, we try to educate them on how they should be around bears," Merkens said. "Stay away, don’t put yourself in as situation where you put yourself in danger. Don’t approach bears closely, we don’t want bears to be habituated where they are close to people. If that happens, they will go towards places where people are.”

His advice is to back up and turn around if you come across a bear while walking on the road or trail.

That’s exactly what Tri-City News staff did Tuesday, staying well away from the bear, backing up as it approached and then turning to proceed down the road.

The bear, meanwhile, didn’t give the reporters a second glance as it continued on its way.