The bear came in close contact with a party of golfers Tuesday afternoon
Jun 17, 2020 3:01 PM By: Stefan Labbé 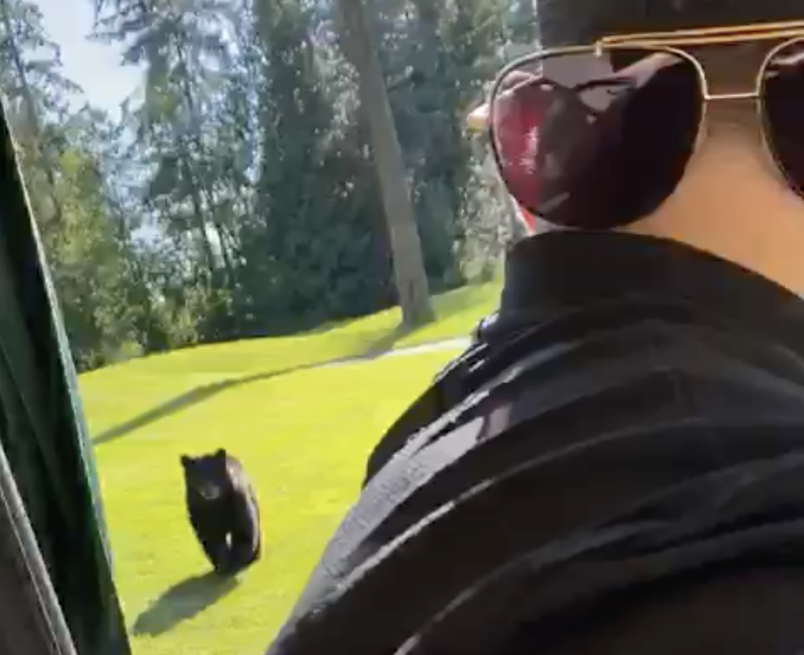 A bear approaches golfers in their cart Tuesday, June 16, at the Vancouver Golf Club. The course shut down following the encounter. Screenshot

A bear roaming the fairways of the Vancouver Golf Club shut down the Coquitlam facility after it came in close contact with a party of golfers Tuesday afternoon.

In a video shared with the Tri-City News, what appears to be a young black bear is seen wandering along a golf cart path, sniffing out a garbage bin.

From a golf cart a short distance away, a group of golfers yells to try and ward off the ursine visitor. But when the bear turns and lumbers toward them, the golfers jumped in their cart to escape. The video ends with the golfers slipping alongside the bear and pulling away at full speed in their cart.

“Our policy is to let wildlife be wild… to leave them alone,” said golf club general manager Richard Creally, noting that the 176-acre course of mostly naturalized space is no stranger to coyotes, bobcats or the occasional bear.

But because of that interaction, Creally said staff shut the course for the rest of the day as a precaution.

The BC Conservation Officer Service later arrived on scene, though Creally said they were not called by the club’s staff.

The encounter comes during a busy time for the golf club, according to Creally. At the height of the COVID-19 pandemic, the club was shut for six weeks. But now, with many members avoiding travel and cutting back on work, they have taken their social bubbles to the links in what has shaped up to be an ideal sport for a pandemic.

“It’s the busiest season ever. It’s record setting,” said Creally. “When you have Dr. Bonnie Henry telling people to go outside and get some fresh air but remain in your family unit — well that’s a foursome.”

The spike in golfers has so far been limited to members, as the course seeks to maintain strict public safety measures around social distancing. That’s laid out in a 29-page protocol document, which has also meant the shuttering of much of the club house and locker rooms, strict sanitation procedures and one person to a golf cart.

None of that has appeared to dampen the members’ appetite for golf, and with 320 golfers teeing off last Friday alone, Creally said he expects the club to remain member-only for the remainder of the season.